83 trailer sees Ranveer Singh hitting it out of the park. Twitter goes wild

The trailer of Kabir Khan's 83 starring Ranveer Singh and Deepika Padukone just dropped, and it has created a frenzy on social media. We take a look at some Twitter reactions.

Even Kapil Dev wouldn’t have ever thought that his demeanour and his style could be brought to life in such an exemplary way as done by Ranveer Singh. The trailer of Kabir Khan’s 83 has just dropped. Understandably, Twitter has gone wild. Ranveer Singh, playing Kapil Dev, steps into the shoes of the veteran Indian World Cup-winning captain just perfectly.

83 hits the theatres on December 24 this year. While Christmas is still three weeks away, Ranveer Singh's fans seem to have started the celebrations early.

But first, watch the trailer of 83:

Now, to the trailer. 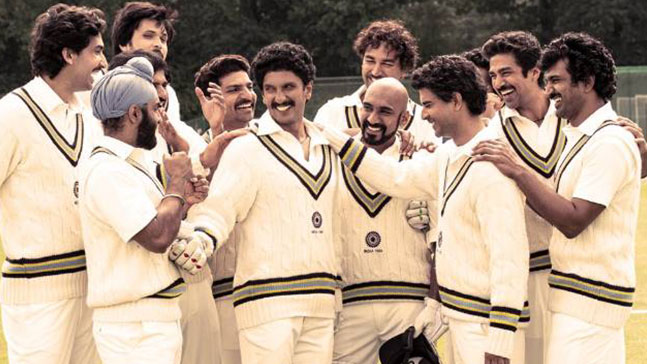 Ranveer Singh in a still from movie '83''. Photo: Instagram

After playing iconic roles like Alauddin Khilji in Padmaavat or a budding hip hop star in Gully Boy, Ranveer Singh essays the role of Kapil Dev in the movie. “We are here to win, what else are we here for,” the dialogue in the trailer itself tells you that Ranveer has hit the role spot on. The same depth in the eyes, and the way Ranveer delivers the dialogues speaks volumes about his character study. Even non-Ranveer fans will acknowledge the actor's efforts this time, it seems.

There is a reason why Ranveer Singh is miles ahead of all his rivals be it Ranbir or Varun. It will be the biggest film of year 2021.@RanveerOfficial #Thisis83 https://t.co/MChISLY6JK

DEEPIKA BACK IN ACTION

Deepika has been missing from the big screen since Chhapaak (2020). 83 marks Deepika's return to the big screen. Padukone plays the wife of Kapil Dev, Romi Dev, in the movie.

What a brilliant #83Trailer , loved it . Goosebumps material.But but but what do I do , I couldn't take my eyes off her .Her ? #DeepikaPadukone .She looks effortlessly natural and beautiful and those emotional scenes , my god.Also special mention to the wig.??? pic.twitter.com/tHyts2gPHR

Not many know that when the Indian team travelled to the West Indies for the 1983 World Cup, they were without a coach; batting, bowling, fielding coaches; but with a BCCI official, PR Man Singh, who was the manager of the team. “35 saal pehle hum log azadi jeete, lekin izzat jeetna abhi baaki hai kaptaan,” a teary-eyed Pankaj Tripathi says to Kapil Dev in the trailer.

Talking to PTI last year, Tripathi said that going through the script of the movie 83 was a emotional ride for him. There were moments in the script, he said, where he was moved to tears and was really inspired by Kapil Dev.

A BEAUTIFUL RIDE BACK TO THE 1983 WORLD CUP

Perhaps the only thing that sells more than religion in India is cricket. For cricket fans, the game is the strongest emotion. 83 the movie takes us back to 1983, when an underdog team like India won the World Cup and the whole country was proud of it. Going back to those moments would certainly be a delightful ride for all of us. After all, hum World Cup jeete they! Here are some Twitter reactions.

Humungous congratulations to the entire cast and crew!!! This gave me goose bumps and is so emotional and arousing! BONAFIDE BLOCKBUSTER! Kabir !!! You’re the man and Ranveer you just became Kapil Dev with the ease of a veteran! Badhai ho! https://t.co/PK9YPRSGyX

Goosebumps guaranteed!! Can’t wait for this one!!! #83Trailer https://t.co/HJUdvA28ML

No iconic moment in Indian Cricket without a reference to the God @sachin_rt . In #83Trailer A glimpse referring to young Sachin. The inspiring victory of India was said to be the driving factor for his entry into the Cricketing arena. The rest is history pic.twitter.com/EdU2oNtD7P

#Deepikapadukone, #1983 world cup, #Ranveersingh, #83trailer
The views and opinions expressed in this article are those of the authors and do not necessarily reflect the official policy or position of DailyO.in or the India Today Group. The writers are solely responsible for any claims arising out of the contents of this article.