Ae Dil Hai Mushkil would have benefited from more such self-ironic moments. As it is, it is a gorgeous looking film with great costumes, even better locations, and super looking actors - all suffering silently and poetically for the cause of love.

Everyone loves someone who doesn’t love them back. Posh people’s pain has never looked as good, not even in the movies of that other expert in this genre, Zoya Akhtar.

So you think people who have private jets and enough money to learn hot yoga, French and Bollywood dance at their abbu’s expense have it easy flitting from party to disco to bar?

You think it’s easy walk the streets of London, Vienna or Paris wearing the latest in couture and looking ecstatic or unhappy as the situation demands? You think it’s easy to enact old Bollywood numbers on freezing mountains and busy streets and then pretend to sing your heart out in Sufi seeming ballads.

It takes a huge budget, lots of gorgeous actors, some for five-minute cameos, and vast amounts of Urdu poetry, which, of course, makes everything sound so civilised.

Everyone in Ae Dil Hai Mushkil speaks in quotable quotes. That is when they’re not dancing to old Bollywood numbers or reciting old Bollywood dialogues (dosti main no sorry no thank you to hum aapke hain kaun). 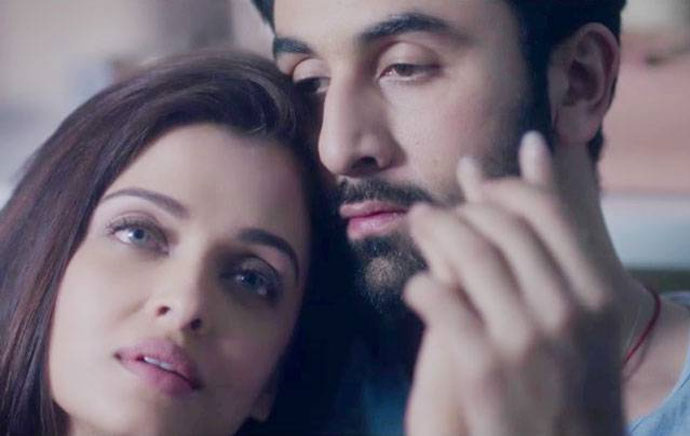 Ranbir-Aishwarya manage to avoid any hint of awkwardness by acknowledging the age and experience gap and clearly deserve another movie of their own.

Every actor is trying hard to be a character.

So Ayan is a rich man’s emotionally underdeveloped son who is doing an MBA but actually wants to sing (which, of course, he can do only once he has his heart broken; which, by now, is something Ranbir Kapoor must be used to after having had to do that in Rockstar).

Saba is a poet who is happily divorced and doesn’t believe in relationships, Alizeh is the youngest daughter of a landed family from Lucknow who believes love makes her weak and emotionally dependent, making her forget her wajood.

They all seem to be living inside their heads, and in the absence of real jobs, have enough time to obsess about their emotional health. Ranbir is made to work hard to earn the interest of the two women in his life, running across cities, throwing things, weeping inconsolably.

Anushka has to play excitable kitten and emotional anchor at the same time. And Aishwarya, well, what can one say. She has rarely looked so ravishing and acted with so much panache as a Rekha clone - the independent older woman to Ranbir’s puppy dog adoration.

The two manage to avoid any hint of awkwardness by acknowledging the age and experience gap and clearly deserve another movie of their own.

Think of it as a Diwali catalogue offering the latest in everything: from clothes to travel destinations. Dil ka pet bhar jayega, to quote Ranbir’s character.

Also read: Karan Johar, you have sold the nation

Post your comment
#Bollywood, #Karan Johar, #Ae Dil Hai Mushkil
The views and opinions expressed in this article are those of the authors and do not necessarily reflect the official policy or position of DailyO.in or the India Today Group. The writers are solely responsible for any claims arising out of the contents of this article.