As the three Big Khans struggle to snap out of their own larger-than-life persona, Kumar has been constantly re-inventing his abilities, while staying firmly himself.

Most people would not have believed it if someone had said in the 1990s that in the coming two decades, among all the male superstars, Akshay Kumar would be the most prolific.

In fact, Kumar, who instantly made an impact with his debut in Saugandh (1991) — and even created a niche for himself as an action star in the classical context of the word, thanks to films like Elaan (1994) and Mohra (1994) — once seemed set to go the Vinod Khanna way: always on the radar, but destined to remain the greatest contender. Akshay Kumar instantly made a mark as an 'action hero'. (Photo: YouTube)

However, the trailer of his upcoming Kesari (2019) — based on the epic real-life Battle of Saragarhi, where 21 Sikh soldiers withstood the onslaught of 10,000 Pashtun Orakzai raiders in 1897 — has got both audiences as well as critics riveted, putting Kumar in a far more enviable position than most of his contemporaries.

In the past few years, Kumar has managed what perhaps the three Big Khans, Ajay Devgn and even Hrithik Roshan have been consistently aspiring for — but falling short of.

He has not only hit the right notes in terms of selecting films, but has also managed to transform himself into someone who can endure any change.

Kumar has been on a golden run in terms of both box office success and acclaim in the past two years — he has had seven releases, six of which have been smash hits. The one that might not have raked in as much money, Pad Man (2018), still managed to get him more glory than expected.

What has worked for Kumar is the manner in which he has not stuck to one single genre or specialised in films that largely cater to a particular segment of the audience. More importantly, despite being one of the biggest cine stars in Hindi cinema, Kumar has avoided nurturing a larger-than-life persona that today seems to be the bane of the three Khans. 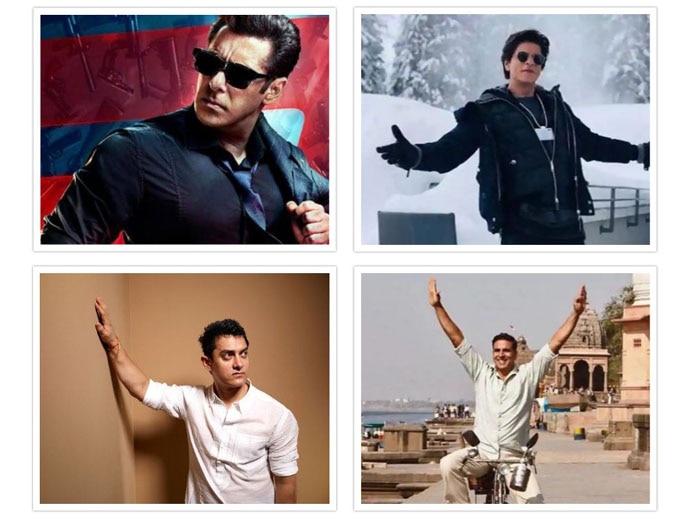 Although most pundits would not believe it, the ability to switch to comic roles is an important factor in differentiating between degrees of stardom within Bollywood. There is no denying that films that featured him in the ‘Angry Young Man’ avataar — such as Zanjeer (1973), Namak Haraam (1973) and Deewar (1975) — played a major role in shaping Amitabh Bachchan’s stardom. But it was the runaway success of Amar Akbar Anthony (1977) that nudged him into a completely different league.

Bachchan, with a comic element in his capacity as the leading man, not only made comedy the centerpiece in terms of the script, but also sidelined the comedians completely. It was this aspect that created the one-man-industry template that Bachchan was best at, when compared with his competition, Vinod Khanna.

This was also the reason why Govinda managed to transform into a box office colossus in the early 1990s — despite the Khans, Akshay Kumar, Ajay Devgan and the resurgence of Sunny Deol post-Ghayal (1990). Since 1992, where Shola Aur Shabnam became a surprise hit, followed by the monster blockbuster Aankhen (1993), Govinda was more consistent at the box office than most other male stars for nearly a decade.

In the case of Akshay Kumar too, it was the comedy genre that resurrected his career — and gave him a second lease of life. Between 1997 and 1999, Kumar had a string of flops that became more pronounced when juxtaposed with the phase where Shah Rukh Khan had come to be identified as the darling of both critics and audiences, and Aamir Khan was mainstreaming narratives that otherwise would have never enjoyed a wide audience, with movies such as 1947-Earth (1999) and Sarfarosh (1998). Kumar might have shown traces of possessing decent comic timing in Khiladi (1992), Waqt Hamara Hai (1993) and Suhaag (1994) — but all that was forgotten with the success of Mohra. The tide finally turned for Kumar after Priyadarshan’s Hera Pheri (2000), and over the years that followed, he came to be identified as a comic star.

This made him stand apart from the Khans, whose films were becoming a near-annual ritual. Unlike Aamir Khan, who focused on doing one film a year or Shah Rukh Khan, who fell in a formulaic trap that he was beginning to find increasingly difficult to snap out of, Kumar not only did more films but also explored avenues that helped him reinvent himself, at least in the eyes of the audiences.

He merrily played the second lead (Mujhse Shaadi Karogi), the near-comedian of yore (Khakee) and the ‘unlikely’ lead in Jaan-E-Mann: Let's Fall in Love... Again (2006). For a brief period around 2009-10, Kumar hit a rough patch where films were not making as much money — but even in that phase, it was comedy (Housefull) that saw him sail through.

Every leading star needs a calling card to survive the test of time and intriguingly enough, here too, Kumar appears to outshine others.

In 2018, where Shah Rukh, Aamir and Salman faced trouble connecting with even their core audiences, with the lacklustre response to Zero, Thugs of Hindostan and Race 3, Kumar, thanks to the combination of experimenting and exploring something new, stood apart. In the last couple of years, Kumar’s films — Airlift (2016), Rustom (2016), Toilet-Ek Prem Katha (2017), Pad Man and Gold (2018), have mixed social messaging, topicality and a sense of realism — without threatening the realm of popular Hindi films, helping them enjoy better acceptance than attempts made by others. But his first release of 2019 breaks that mould. (Photo: YouTube)

The parameters of superstardom might have changed in Hindi films over the past decade — but there is still some fascination attached to the classic ‘film star’. That is why an Alia Bhatt, Varun Dhawan, Ranveer Singh and Kangana Ranaut are throwbacks at the traditional definition of the superstar.

And considering how things stand, few can come close to Akshay Kumar.

#Cinema, #Bollywood, #Kesari, #Akshay kumar
The views and opinions expressed in this article are those of the authors and do not necessarily reflect the official policy or position of DailyO.in or the India Today Group. The writers are solely responsible for any claims arising out of the contents of this article.