10 films that made Akshay Kumar a superstar

Half his films are full of mindless masala, comedy and action and the other half are 'different' path-breaking films which also get box-office success.

Akshay is one of the rare Bollywood stars who has balanced absolutely brainless cinema with some really serious masterpieces.

Half his films are full of mindless masala, comedy and action and the other half are “different” path-breaking films which also get box-office success. Slightly unpolished in the 1990s, Akki has really taken off in the new millennium and seems to be getting better with each passing year.

In a way this started it all. Every superstar needs an all-time great to kickstart his superstardom and Hera Pheri was just that. It is still considered by many to be the greatest Bollywood comedy.

The story. The script. The dialogues. The comical scenes. The chemistry between Akshay, Paresh Rawal and Sunil Shetty was perfect. You can watch this movie again and again and this film established the Khiladi as the comedy king too.

We tolerate his absolutely mindless Housefull series and many others like De Dana Dan because we are still hoping for another Hera Pheri. Action and comedy became Akshay’s bread and butter and he was free to try for more innovative things in his other movies. 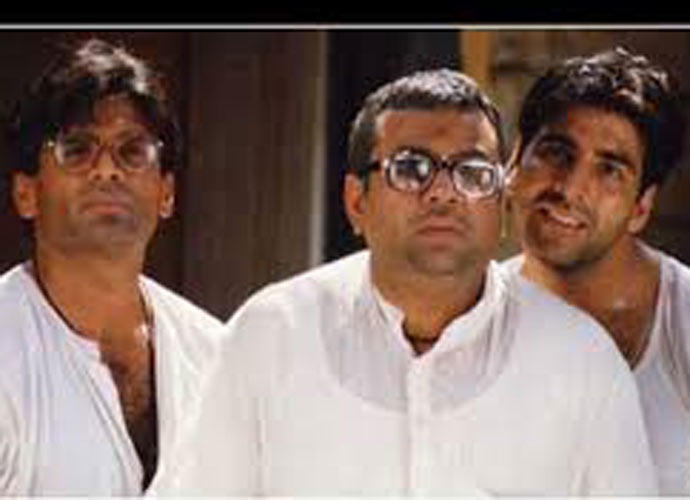 The police officer is Akshay’s most repetitive role, but Khakee is his standout film. He can carry a film on his shoulders and shine in an ensemble cast too. This was one of the earliest movies which established that Akshay didn’t need a romance or mindless comedy to shine. You can always trust him to come out with a quality performance and bring a great script to life.

In an era of Bollywood alpha males strutting around, it takes guts to play an emasculated man who gets sexually harassed by a woman. A hero could be forgiven for thinking that such a movie could end his career.

But Akshay pulled off this movie. It was received well by the audiences and they made it a hit. Good for us, because Akshay continued experimenting big time after this. In fact he played a diffident panauti (unlucky/cursed person) in the blockbuster Welcome. Akshay can suppress his alpha male action avatar at will on screen. This is yet another film where Akshay doesn’t romance the heroine. Dissociative identity disorder has been done to death in Hollywood. But that’s not the case with Bollywood, where its subtleties are lost on Indian audiences. A psychiatrist who investigates a ghost story is a novel concept for Bollywood and this one still managed to become a blockbuster.

Probably the most intelligent religiously philosophical movie made in Bollywood. While PK was a far bigger blockbuster, OMG was far deeper. Another great script brought to life by Akshay who plays “God”. Not Krishna or Vishnu, but an average dude riding a motorcycle!

Everybody loves a good heist and Hollywood is full of such capers. Bollywood always lacked slick, intelligent and well thought-out heist movies. Now Special 26 has set the benchmark. Its fast paced action puts you on the edge of the seat throughout the film.

If Special 26 became a benchmark for Bollywood heists, then Baby is definitely a benchmark for anti-terrorism films. A polished 24 (the TV series) style film, this fast-paced realistic thriller showed that Bollywood could match Hollywood standards if it wanted to.

Another ensemble cast which Akshay leads with great aplomb. With this he bettered his own performance as a counter-terrorism expert in Holiday.

Comparing Bollywood to Hollywood for the umpteenth time, we make very less films on our real life heroes. In 1990, over a period of two odd months, Air India evacuated 1.75 lakh people hit by the Gulf War and made it into the Guinness Book of World Records for “the most people evacuated by a civil airliner”. Trust Akshay to make a movie out of it, give another solid reliable performance, a hit and make sure that nobody would forget the above world record.

This movie probably inspired a generation of children to join the Indian Navy even though the contents of this film are definitely not for children. Akshay is one of the rare Bollywood heroes who has aged well and looks one of the smartest defence officers ever on the screen.

The epitome of slickness, this film got everything right from the beginning to the end. Even though you know Akshay is going to get away in the end, it still keeps you on the edge of your seat till that happens.

Not many Indians have heard of Arunachalam Muruganantham. He is the man who invented the low-cost sanitary napkins and wants to lead a menstruation revolution and spread awareness in rural India.

He is the star of many business talk programmes, though not that famous elsewhere. Trust Akshay to bring this interesting character to life on the Bollywood screen! Directed by R Balki (Cheeni Kum, Paa, English Vinglish), Padman will release in 2018.

In the 1990s, Akshay established himself as the regular action romance cop playing Bollywood hero. At the turn of the century he mastered comedy. But after that he became a chameleon and proved that he can play just about any role that any script can demand of him.

That includes the much anticipated Rajinikanth Robot sequel 2.0 (2018) where Akshay plays a mad-looking evil scientist. With the versatility that Akshay has shown in the past, you can be sure that Akshay will pull that off and match Rajinikanth on the screen.

#Bollywood films, #Rustom, #Toilet Ek Prem Katha, #Akshay kumar
The views and opinions expressed in this article are those of the authors and do not necessarily reflect the official policy or position of DailyO.in or the India Today Group. The writers are solely responsible for any claims arising out of the contents of this article.