What distinguishes mytho-pop from other fantasy writing is that it is unabashedly Indian and almost totally indigenous.

A bestseller that is currently making waves is Amish Tripathi's Sita: Warrior of Mithila. To my mind it represents a new trend in an already popular genre. I am not sure what to call it, perhaps, mytho-fantasy rather than fantasy-thriller.

Essentially, it consists of a contemporary retelling of Indian myths for popular audiences. At times, the story may be completely invented, not based on any known myth or legend, as in the case of Bahubali. Incidentally, the fictional prequel of the latter by Anand Neelakantan was recently released.

This is one of the few instances in India of a book following a movie. Though its story isn't derived from mythology, Bahubali does have the feel and echoes of older Indian, mostly Hindu narratives.

Mytho-fantasy is thus our fastest-growing niche in the popular literature category, with an increasing audience, mostly drawn from among the young. Though some critics have dismissed it as "Indiana Jones meets Dan Brown", the genre has attracted real talent, including Ramesh Menon, Ashok Banker, Ashwin Sanghi, Vamsee Juluri, and a whole host of younger, lesser-known tenderfoots.

What makes Amish's new novel fascinating is that he may have transformed and popularised the genre in a radically new direction. Amish is different from his fellow-practitioners of mytho-fantasy in that he is also unabashedly political, thus very easily read as part of the current wave of Hindu resurgence.

As Vishwamitra tells Sita after anointing her as the new "Vishnu", "This land of ours is sacred… the soil in this great nation is hallowed… This nation cannot be allowed to remain in this wretched state. It is an insult to our noble ancestors."

We must make India great again - that could well be Prime Minister Narendra Modi himself speaking. The theme would be familiar to every contemporary Indian. But apart from political, such a stance among our mytho-pop litterateurs has aesthetic implications too.

What distinguishes mytho-pop from other fantasy writing is that it is unabashedly Indian and almost totally indigenous. At least as of now. These writers are not pandering either to the tastes or demands of foreign publishers or audiences; there is an Indocentric creativity at work here.

In Amish's case, his commercial success, with multi-crore advances and sales running into millions, has made him a phenomenon in the world of contemporary Indian bestsellers. He is known to use innovative marketing techniques to publicise and sell his books, including serving faux "somras" at launches, beating his own drum (instead of blowing his own trumpet), quite appropriate for a professed Shiva devotee, releasing movie trailer-like previews on social media, and concentrating on bookstore promos rather than vanilla launches.

With an MBA from IIM-C, Amish understands that for pop fiction, marketing is as important as, if not more than, the actual writing. He publishes new books at steady intervals to ensure that he is always in the news and the demand for his creations does not diminish. At the same time, he is also interested in serious, even critical responses to his work, not just adulation from fans. 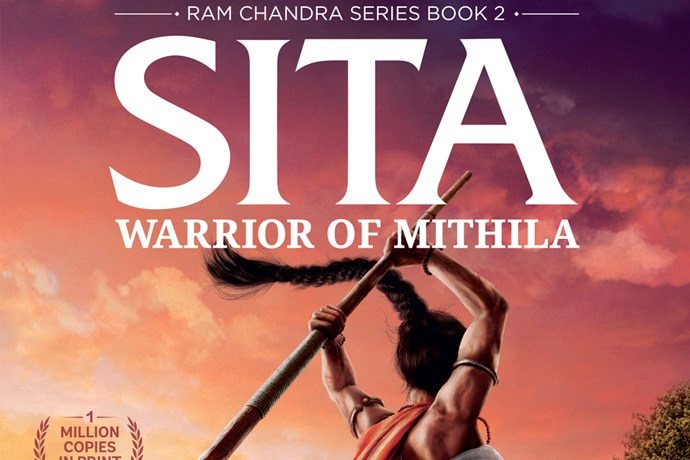 I hadn't read any of Amish's earlier novels but picked this one up because I found him refreshingly interesting, amazingly well-read, and genuinely humble. His huge success, fan-following, and literary pop-star status, to recall Shekhar Kapur's phrase to describe him, doesn't seem to have gone to his head.

When we met, he plunged into a passionate discussion right away, moving easily and disarmingly from one topic to another. As I listened, I found him intellectually ambitious and inordinately curious. Also, patient, focussed, attentive, when needed. Coming to the actual contents of Sita, as the subtitle declares and the cover illustrates, she is a warrior-princess, rather than the demure, docile, and devoted victim-spouse of Ram as she has come to be depicted.

Amish brashly reengineers her character, personality, and physique to fulfil a totally different role. He does so with considerable courage and panache, albeit with bold and bright strokes. She is tall, muscular, and battle-scarred, but emerges as a sympathetic, convincing character. What is more, she is the center not just of attention and action, but it is her subjectivity that informs the worldview of the text.

There are other strong women, Sunaina, her mother, Samichi, another warrior antagonist, as also conventionally soft (Urmila), scheming (Shurpanakha), or wicked (Manthara) females. It is the males who are simplistic, limited, or ineffectual; both Janak, Sita's father, and Ram fail to impress. The latter is rule-bound and idealistic, more a victim of circumstances than a hero.

Ravan remains a caricature, as do a number of other important characters, one subset of whom are resembled mutants and are called "Nagas". That is how Amish explains the vanaras, bears, vultures, and other characters traditionally thought to be non-human.

Great gurus like Vishwamitra and Vasishtha come across as all too faulty and rash, less rishis, more politicians. The romance between Sita and Ram, manipulated by the former, is, likewise, rather unconvincing, lacking in psychological depth or emotional intensity. But Amish daringly rewrites ancient myths in radically contemporary ways using alternate sources such as the Adbhuta Ramayana.

For instance, Sita is older by five years and is "the Vishnu", not Ram. Amish also completely reinvents back-stories to explain his characters' motivations and account for their actions. Contemporising the conflicts and contributions ancient heroes, he at once retells familiar, timeless stories and intervenes in today's social and political realities.

Amish does so without destroying the sanctity and loftiness of the originals. Do we feel the tug of devotion or spiritual exaltation when we encounter Amish's Sita-Ram? No. But we do experience awe, majesty, grandeur, and heroism. Perhaps, that is enough.

#Novel, #Pop, #Mytho-fantasy, #Warrior of Mithila
The views and opinions expressed in this article are those of the authors and do not necessarily reflect the official policy or position of DailyO.in or the India Today Group. The writers are solely responsible for any claims arising out of the contents of this article.