The real magic of Amitav Ghosh

His body of work is one of the strongest examples that subcontinental literature has moved out of Salman Rushdie’s shadow.

For flamboyance and reasons of general tipsiness, it’s the opening bong-hit of a passage from Narcopolis. For honesty that cuts like a knife and gives a sum total of zero f*cks about your feelings, there’s William S Burroughs' Junky. However, the award for the most artfully ominous passage about an opium haze must surely go to Amitav Ghosh’s Sea of Poppies, where a woman named Deeti has a vision of the Ibis, the ship that is to become central to her destiny, as indeed the fates of the other protagonists. For a Bhojpuri woman working on a poppy farm to have a vision of a ship was, by itself, hallucinatory; as Ghosh puts it, "Deeti knew that the vision was not materially present in front of her – as, for example, was the barge moored near the factory. She had never seen the sea, never left the district, never spoken any language but her native Bhojpuri, yet not for a moment did she doubt that the ship existed somewhere and was heading in her direction. The knowledge of this terrified her, for she had never set eyes on anything that remotely resembled this apparition, and had no idea what it might portend."

Delhi’s booklovers have circled their calendars for Wednesday, when Ghosh will release Flood of Fire, the third and concluding part of the Ibis trilogy. And although publishing hype can be devastatingly off the mark, there’s every reason to believe that this might be Ghosh’s finest yet. Set in the first half of the 19th century, the trilogy is about the opium trade between India and China, executed by the East India Company, as well as the indentured labourers shipped off from India to Mauritius. 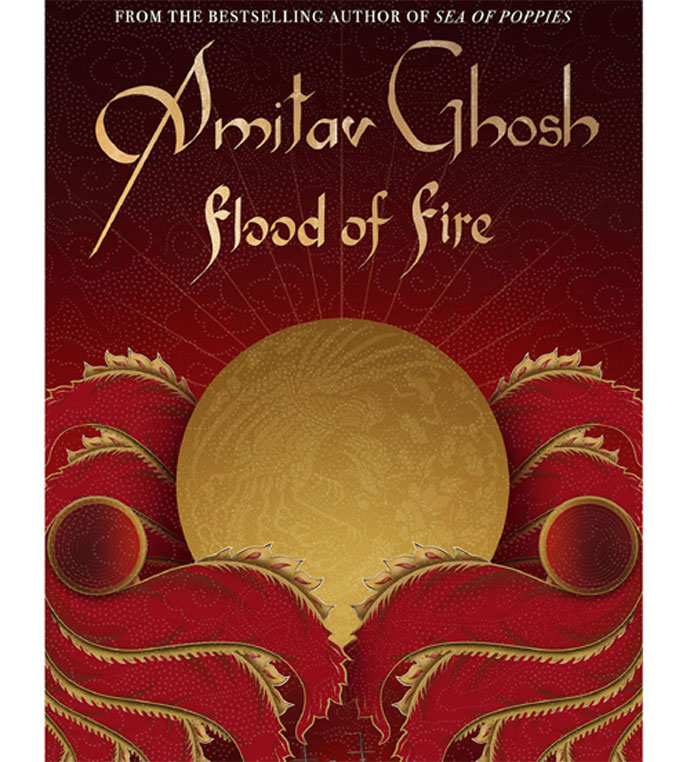 By now, most of Ghosh’s fans are aware of his penchant for hunting down rare and fascinating documents: traveller’s accounts, surveys, land records and so on, and crafting a riveting narrative around them. For his 1992 non-fiction classic, In an Antique Land, he gathered documents and historical accounts for more than a decade, even going to the extent of learning Judeo-Arabic for the same. This same bloody-mindedness has now brought about the Ibis trilogy, through the accounts of a 19th century Bengali zamindar called Neel (reimagined in Sea of Poppies as Neel Rattan Halder) and his son Raju.

Ghosh’s dogged resolve to ground his fiction in reality and to flesh out substantial backgrounds for his characters is an extension of his take on postcolonialism and postcolonial literature. Having placed a "supernatural vision" on the very first page of Sea of Poppies, he then proceeds to belt out thousand-plus pages without a shred of magical realism. His body of work is one of the strongest examples of the fact that subcontinental literature has moved out of Rushdie’s shadow. For Ghosh, the real "magic" is in being a "fly on the wall" when cultures and languages meet. How does a half-Chinese, half-Parsi sailor talk? When a Bhojpuri woman begins to pick up bits and pieces of English, what does she sound like? Was a modern-day Hindustani penile colloquialism nautical in its origins? (Tiny spoiler: Yes) The Ibis trilogy answers these questions and more.

Personally speaking, my favourite character from the two books so far is Bahram Modi, the Parsi merchant. Modi is certainly among the top three characters Ghosh has ever created, and that qualifier is only because of the imposing presence of Tridib from The Shadow Lines. He was the catalyst for much of the action in River of Smoke, the second part of the trilogy. The linguistic energy referred to in the preceding paragraph reaches fever pitch here: smatterings of Chinese, English, Parsi, Gujarati... nobody would blame you if you felt a little out of your depth while navigating his dialogue. It’s exhilarating stuff and it makes you realise the true extent of Ghosh’s ambition.

Ghosh, like Margaret Atwood, Michael Chabon, Jonathan Lethem, Helen Oyeyemi and others, is a member of that small, exclusive club of literary fiction authors who write with the verve and the energy typically associated with the very best of genre fiction (I read River of Smoke and Sea of Poppies in a frenzied fortnight). This is yet another reason why we ought to celebrate his works: because they show that a novelist’s pursuit of intellectual acuity and sociological details need not require a complete sacrifice of pace or plotting. Until Tuesday night, I may be on page zero, but on Wednesday night, I’ll be on page 100 for sure.

#Flood of Fire, #The Shadow Lines, #Sea of Poppies, #Amitav Ghosh
The views and opinions expressed in this article are those of the authors and do not necessarily reflect the official policy or position of DailyO.in or the India Today Group. The writers are solely responsible for any claims arising out of the contents of this article.