Avadhāni can compose poetry, while solving a mathematical puzzle, answering riddles and playing chess – all simultaneously.

A colleague once enlisted my help to get his daughter into a particular pre-school in Delhi, because if she didn’t go there, she wouldn’t get into Harvard. At the time I thought he was being facetious, seeing as the child was only two.

In retrospect, I realise he may have been onto something. Desi parents will leave no stone unturned to facilitate the academic and professional success of their children (mea culpa!) and it can’t start soon enough.

But are we doing it right? Are tuitions and coaching classes the way? Do our kids have to work 14 hours a day, and even if they do, are they working smart?

Study techniques like Vedic Maths and the Japanese teaching method have been hailed as facilitators. Truth be told, we haven’t even scratched the surface of what our ancient tradition can bring to our lives. And that too without the unbelievable stress of coaching classes and tuitions.

It has long been known that the human mind is capable of amazing feats, and to my mind, none are as amazing as the transmission, orally, without error, for thousands and thousands of years, of the Vedic corpus. How did they do it!?

Well, they had mnemonic devices and particular methods of scholarly play which enhanced the creative and retentive faculties of the mind. This gave rise at the turn of the millennium to Avadhāna, a technique which enabled budding scholars to possess simultaneous concentration on different fields like literature, music, astronomy, astrology and medical science to name a few.

Sadly, only a handful of people are any longer in the know.

Avadhāna, derives from the Sanskrit root ava√dhā (to place down, plunge into, apply or direct the mind). The practitioner, the avadhānī is capable (at the very least) of applying his/her mind to composing poetry under specifically challenging conditions while solving a mathematical puzzle interspersed with debating śāstric matters, answering riddles and playing chess – all simultaneously, and is able at the end of it to tell how many times a bell rang randomly while the proceedings were on.

Some of us might have seen concentration exercises in martial arts movies and been impressed, but Avadhāna is in a different league altogether. You can see a modern day Avadhāna in progress here:

The Vedic student was calledan "avadhānī". Many "games" were played by these avadhānīs. For instance one could be asked, "What is the 5th word of mantra no. 9 of the 15th sūkta of the 8th anuvāka of the 10th maṇḍala of the Ṛgveda?" And the avadhānī was expected to utter the correct word.

Or one avadhānī would chant a particular mantra and leave out a few words from it and the other avadhānī had to fill in the missing words. "With this tradition, perhaps several types of avadhāna or feats of concentration originated. Later these avadhānas were incorporated into the poetic tradition and Avadhāna developed as a literary activity or sport,” Mishra adds.

There are many types of Avadhānas, as well as various levels. If the student/practitioner is able to face eight scholars from different disciplines and simultaneously answer questions and complete tasks put forward, he/she is called an aṣṭāvadhānī.

If the panel of questioners (pṛcchakas) are a hundred, the practitioner is a śatāvadhānī (as is Dr Ganesh in the video quoted above). If one is capable of taking on a panel of a thousand scholars, one is a sahasrāvadhānī.

Were we to revive and popularise these techniques, who’s to say we won’t develop a generation of supermen and women?

The Mother of the Shri Aurobindo Ashram has extolled the capacity of concentrating attention and called it indispensable. "If you are able to gather together the rays of attention and consciousness on one point and can maintain this concentration with a persistent will, nothing can resist it," she says. 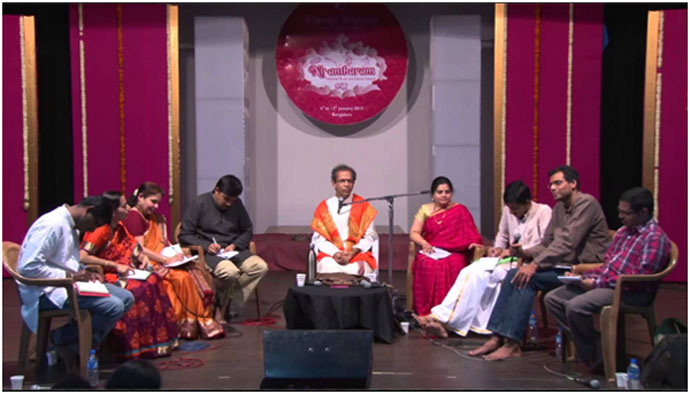 Whether it is the material or the spiritual field, "the power of concentration is the key which, when combined with a will and perseverance, can open all doors and lead to success in any endeavour," Mishra adds.

The discipline is not entirely forgotten, though it is in relative disuse. Bangalore-based software professional and Sanskrit aficionado @sudarshanhs tells me, "There is an Avadhāna, at least once a month in Bangalore, more if you count the rest of Karnataka. In the last one I attended, the avadhānī was 30 years old, and his pṛcchakas, who were doctors, engineers and scientists were even younger!"

In a forthcoming book, Sampadanand Mishra of the Aurobindo Ashram will unveil this ancient discipline. How is it imparted? How is it inculcated? How is it developed? And then the moot question - how best can we incorporate Avadhāna into our lives today? Can or should it be mainstreamed? Should it be imparted in optional "courses", or could it to be the substratum of our education system? Do we have to wait for outsiders to "discover" it before we appreciate its enormous potential or can we see the light on our own? Is it for children or can we benefit from it as adults? I, for one, can’t wait to find out the answers.

Mishra concludes, "Till one doesn’t experience an Avadhāna personally, it is difficult to believe that the human mind is capable of such mastery. One experiences not only the great potentiality of the human mind but also the amazing flexibility and richness of Sanskrit. Indeed there is so much beauty and value in ancient Indian heritage and in Sanskrit, which is hidden or lost. This needs to be rediscovered, given a new form and made part of education and life. It would be of great benefit not only to India but the whole world."

We are falling over ourselves to reclaim yoga. Yet Avadhāna languishes. Do I need to draw a picture?

#Mind, #Sanskrit, #Vedas, #Avadhāna
The views and opinions expressed in this article are those of the authors and do not necessarily reflect the official policy or position of DailyO.in or the India Today Group. The writers are solely responsible for any claims arising out of the contents of this article.