'Badla' Movie Review: Amitabh Bachchan, Taapsee Pannu and Amrita Singh keep you at the edge of your seat

'Badla' Movie Review: Sujoy Ghosh’s revenge drama will remind you of 'Kahaani'. I’m going with 3.5 stars out of 5.

If there’s one thing Sujoy Ghosh can do, with a film like Kahaani up his sleeve, is to deliver a thriller. Badla is no different. The Amitabh Bachchan, Taapsee Pannu and Amrita Singh starrer is as sleek and as gripping from the first scene as Kahaani was — and yes, it manages to keep you guessing.

Now, there are several things that have worked in favour of the film — first, of course, is Sujoy’s familiarity with the genre. Then, there is the crisp storyline — with a deliberately disjointed screenplay, reminiscent of Ittefaq (the older Rajesh Khanna and Sadhana starrer. Not the one with Sidharth Malhotra, Sonakshi Sinha and Akshaye Khanna) to show you several versions of the same sequence of events just to play with your mind. And boy, does it work!

But, for me, what remains Sujoy’s masterstroke is the casting.

Amitabh and Taapsee were last seen in Pink, a courtroom drama which was equally gripping, but with a lower suspense quotient. Reuniting them in another drama with the law in the middle was brilliant, simply because it gives the audience an instant connect.

Then there is Amrita Singh — an actor Bollywood has only recently rediscovered.

So, with three strong performers and a near-flawless script, it was already half the battle won for Sujoy. But as is the norm with every suspense/thriller/revenge drama, there’s always far too much willing suspension of disbelief required.

Plotting an act of revenge — a seamless one, without leaving any trace for the police to track you down or for the bad guy to turn around and pin you — requires skill. What makes ordinary people, living ordinary lives — with age lines to cover and deadlines to meet — turn into Sherlock Homes instantly is something I could never quite grasp. Badla will leave you asking the same question, briefly — before Sujoy casts his spell and makes you see only what he wants you to see.

Without giving out spoilers — Badla starts off with Naina (Taapsee) arrested and now on bail for the murder of a man, Arjun, in a hotel room. She is the prime — and only — suspect because there was literally no one else on the scene — no fingerprints, no footprints, no sign of forced entry into the room or exit. Naina pleads not guilty, which then must point to the existence of another person — a ghostlike entity who actually committed the murder. 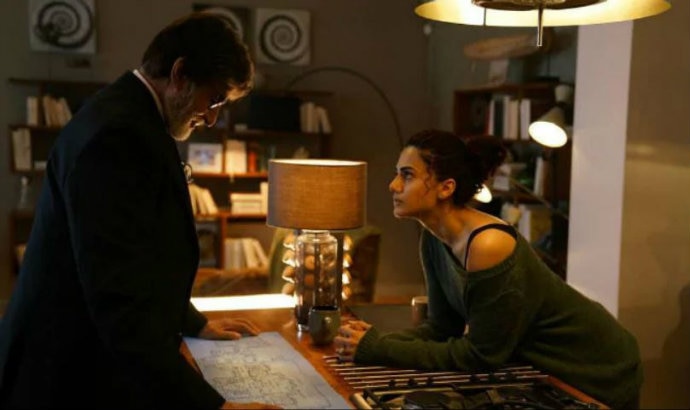 Sujoy got the casting of Badla right, and that was half the battle won. (Source: YouTube screengrab)

It is now up to Naina to prove her innocence, and Badal Gupta (Amitabh), her lawyer, to rinse out every detail from her to build a case, both sitting across each other in a room where the entire film takes place. Somewhere far away from this client-lawyer discussion is Rani (Amrita), a woman with a missing son, Sunny Singh, who is convinced that Arjun (the guy who now lies dead in the hotel room) and Naina have together murdered her son.

Several tiny strands connect these two murders — throw in an illicit affair, a blackmailer with information, and several lives and reputations interconnected, and you have enough gasoline to burn the house down.

Badla does that quite convincingly. Which is why I am willing to forgive things like even though the film is set in Scotland, the top cop interrogating Naina is Indian, as is a journalist whose identity Rani steals to meet Naina, and finally, and most importantly, the lawyer appointed to save Naina is also, quite conveniently and clearly for the sake of a Hindi film dialogue, an Indian, played by Amitabh Bachchan.

PS. A shout out to Bobby Deol fans — for Big B's name is borrowed from two of Bobby's films — Badal and Gupt. Badal Gupta, geddit?

Also read: Sushant Singh Rajput and Bhumi Pednekar’s 'Sonchiriya' is gory, gripping and grows on you

Post your comment
#Sujoy Ghosh, #Amrita singh, #Taapsee Pannu, #Amitabh Bachchan
The views and opinions expressed in this article are those of the authors and do not necessarily reflect the official policy or position of DailyO.in or the India Today Group. The writers are solely responsible for any claims arising out of the contents of this article.