What Baywatch and Wonder Woman reveal about objectification of women

It’s amazing how the female gaze makes a ton of a difference.

On Thursday night I saw, more like endured, Baywatch, a film that I now refer to as Bore Watch. The film, unsurprisingly, stuck to the popular TV series’ most iconic imagery – women running in slow-motion with the focus solely on their partially exposed breasts.

The makers make no apologies of the fact that they intend to objectify women and even draw laughs at the expense of their bodies. One character spends most of his time ogling at his colleague’s breasts.

In one scene, in which India’s most sanskaari man aka Pahlaj Nihalani has omitted all mention of the word breast, Zac Efron’s character stares at his love interest’s breasts constantly.

It may be sexual harassment at workplace in the real world, but on Emerald Bay things are different. Summer revels in the attention, even bouncing them before walking away.

Adult comedies know that cleavage as a trope works but in Baywatch pretty much nothing works, including The Rock and Efron’s super-toned abs. 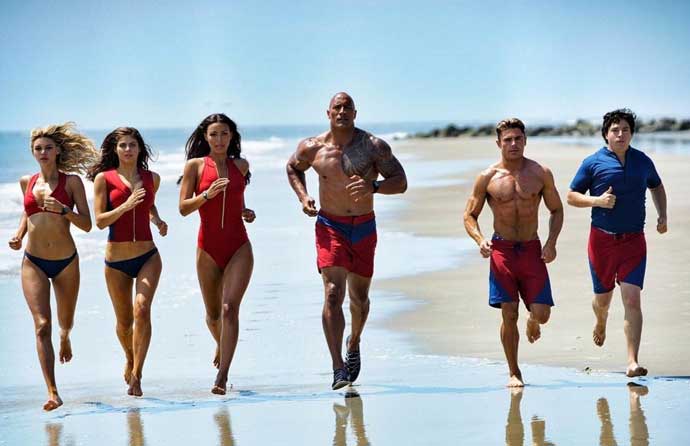 Before you accuse the filmmakers of reducing the female characters to just desirable bodies, let it be known that the lifeguards’ enemy number one is a female character.

Enter Victoria Leeds, played by our very own Priyanka Chopra, whose job description here is to strut about in heels and use her husky voice to mouth profanities and belittle men for their ineptitude. We’re guessing this is Seth Gordon and his writers’ idea of female empowerment.

But it’s a move equivalent to Kendall Jenner handing a can of Pepsi to a police officer to extend a message of peace.

Chopra has just about five scenes in the film, and never strikes as a formidable envy. “I’m not a Bond villain... yet,” says Chopra’s Victoria. You can never be if you are written as poorly as Victoria’s character is.

Cut to Saturday morning when I find myself in a theatre with three young girls who have come to watch Wonder Woman, an action flick with a superheroine calling the shots.

How daddy managed to get the trio into an adult-rated film is a different matter altogether, but we needn’t be worried for Uncle Nihalani was to the rescue again. Viewers were denied a view of Captain Steve Trevor’s (the dapper Chris Pine) big asset – instead we see a black oval moving about on screen.

Yes Baywatch and Wonder Woman are set in different universes and belong to different genres, but nonetheless one can’t help but note how different two films with women in revealing outfits can be. Wonder Woman’s got women dressed in armoured leotards, walking with swagger in thigh-high slits and flying about with most of their legs exposed. But never does it make for voyeuristic viewing, for at the helm is a female director in Patty Jenkins.

It’s amazing how the female gaze makes a ton of a difference when it comes to capturing a divine beauty wearing a teeny, sculpted outfit for most part of the film.

Based on William Moulton Marston’s creation for DC Comics, Wonder Woman starts off in Themyscira, a secret, idyllic island where only women reside. It’s all hunky-dory until an aircraft with a man (but, of course) crashes into the sea and the Amazon warrior princess Diana (Gal Gadot), child of Zeus, dives off a cliff to rescue him. (In Baywatch most underwater rescuing is left to the HEroes of the film, with women better off on boat demonstrating their concern.)

Soon Diana and Trevor depart for London to end World War I. But really he is just a spectator to the sheroics, for in her own words – “I’m the man who can”.

Jenkins is in a cheeky mood here, objectifying the male lead once and even making him the target of a few jokes. “...men are essential for procreation. But when it comes to bodily pleasure… unnecessary,” says Diana when Trevor asks her for some tips from Cleo's treatises on body and pleasure.

She also uses the period setting to highlight the gender disparity at play when a naive Diana asks right but tough questions as to why she can’t be in a roomful of men discussing politics and why she has to abide by a conservative dress code.

Like Baywatch, Wonder Woman too has plenty of slo-mo, but here it is to showcase kickass female characters performing flying twirls, back flips and leaps, shooting three arrows at one (move over Baahubali, Robin Wright’s Antiope is the new ace archer in town). Diana’s bullet-deflecting skills will give Rajinikanth a run for his money.

Wonder Woman makes no bones that it is a superhero flick, sticking to formula throughout but there is a generous balance of thrilling action sequences and nuanced moments.

Yes, you can predict who's the baddie long before it is actually revealed in the last act, but then you also have a heroine who is an idealist at heart, who believes in compassion, and is convinced love can trump war.

That’s a woman to root for.

Also read: Not even Priyanka Chopra can save Baywatch from sinking

Post your comment
#Wonder Woman, #Baywatch
The views and opinions expressed in this article are those of the authors and do not necessarily reflect the official policy or position of DailyO.in or the India Today Group. The writers are solely responsible for any claims arising out of the contents of this article.