Bigg Boss 9: Salman and SRK's reunion was a win for Dilwale

Along with Kajol's infectious energy, this was one of the most entertaining episodes on TV of the year 2015.

This time it wasn't a Baba Siddique iftar party but an episode of Bigg Boss that was enough to send the nation into a tizzy. Finally, the two Bollywood greats of our time came together on one platform after what seemed like decades. The Dilwale King Khan and Superstar Bhaijaan set the Bigg Boss stage on fire and gave us one of the most entertaining episodes on TV this year.

Though this season has been called "Double Trouble", hardly anything has happened this season that justified the title of the show. Except yesterday, when we actually saw the two stars, Shah Rukh and Salman getting together and dishing out old secrets of each other. Joining them in their mischief was Kajol whose infectious energy lit up the stage. 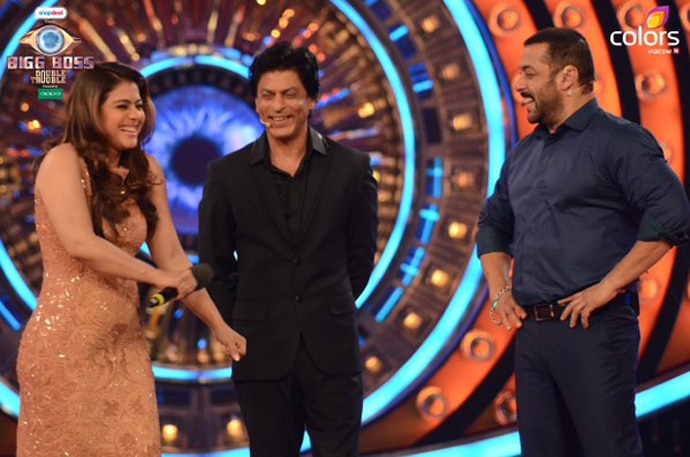 Fortunately for the contestants, there were no evictions. Salman turned Santa and Christmas came early for the lot today. And who would want to exit the house when Shah Rukh and Kajol were there?

No, today Rochelle's voice, Mandana's mood swings and Rishabh's senseless arguments weren't the highlight, but Kajol and Shah Rukh's brilliant chemistry mesmerised the housemates with their song "Gerua". And did they paint the house red with it!

As the two "Dilwale" entered the house, the girls, Nora, Mandana and Kishwer especially took a few moments to realise that the superstars were really standing in front of them.

Before entering the house, Salman warned Shah Rukh and Kajol to be wary of three things when inside: Mandana's anger, Priya's logic and Rochelle 's voice. With this piece of advice, the two entered the house and have a series of task lined up for the housemates which we will get to see tonight.

Also read - Bajirao Mastani or Dilwale: Which will win us over?

For now, we are happy that our Karan-Arjun back together and we finally see a possibility of the two in a film together.

Post your comment
#Salman Khan, #Shah Rukh Khan, #Dilwale, #Bigg Boss
The views and opinions expressed in this article are those of the authors and do not necessarily reflect the official policy or position of DailyO.in or the India Today Group. The writers are solely responsible for any claims arising out of the contents of this article.