Paresh Rawal to SRK, how Bollywood plays eunuchs and cross-dressers

Almost all actors, including Kishore Kumar, Shammi Kapoor, Dharmendra, Sanjay Dutt and Aamir Khan, have played with gender identities in their films.

Gender and identity are almost synonymous in the society we live in. Our primary identity is derived from the gender we are born into. Then come religion, class, caste and many other subdivisions.

That answers why eunuchs (narnban) and cross-dressers (zenanas) threaten our idea of identity to the extent that we sideline them to the periphery of our civilisation.

Now, that was not always the case. In the Mahabharata, Arjun as a eunuch-transvestite performs rituals during childbirth and weddings, something we can identify with present day "hijras". During the Pandava’s Agyatvaas, the one-year exile where they had to conceal their identity, Arjun cross dresses as Brihannala, a dance guru and escapes exposure.

It is only much later during the British Raj that authorities attempted to eradicate them labelling them as "criminal tribes". The representation of eunuchs and cross-dressers in Hindi films is as sensitive and tragic as entertaining.

In Mahesh Bhatt’s Tamanna (1997), Paresh Rawal as Tikku, a eunuch working as a hairdresser in the Hindi film industry, explores delicate feminine sentiments. Bollywood as an industry has been welcoming to the third gender.

Inseparable from his dead mother, Tikku adopts a cast-away girl child to heal his sorrow. In a society which functions around profits and losses, a eunuch living a cursed life proves more tender than most others. Rawal as the fragile yet robust Tikku portrays the character of a single father who is characteristically more mother-like.

In a scene where he explains his distress as the guardian of his incorrigible and undisciplined child Tamanna to the heroine he works for, the actor is phenomenal in his encapsulation of Tikku’s anima.

As a eunuch, his trials make him sensitive rather than frightening. Much like any lone woman he is one against many at multiple occasions.

It is important to notice that Bollywood as an industry is more welcoming to the third gender since many like Tikku make their livelihood based on their occupational identity.

In a film where a matriarch, Zohra Sehgal, declares female foeticide as an ascending order in the society, a "deficient" hijra makes for progressive headlines.

Gulzar’s "Chupdi chupdi chachi" marks the entry of the extraordinary Kamal Haasan, as Jai Prakash Paswan in the guise of the stupendous Lakshmi Godbole. Chachi is the centre of admiration of not just Amrish Puri as Durgaprasd Bharadwaj and Paresh Rawal as Hari Bhai but his audience who can’t stop gushing at her grace, poise, humour, presence of mind and heroism. Chachi, played by Kamal Haasan, struggles to ward off male attention in Chachi 420.

Despite being aware of the cross-dressing, we believe, accept in fact, Chachi as the perfect balance in an imperfect world. She is our superhero in her traditional garb with the best of male and female attributes rolled into one. Michael Westmore, an American make up artist, transforms Haasan into Chachi taking us on a trip of rib-tickling repartee.

As a country we have fancied cross-dressing as an art. That accompanied with the actor’s impeccable rendition of a female character makes Chachi 420 a celebration of love, traditions and feminism.

Role reversal happens as Jai takes up the role of the mother instead of the father that he originally is. That calls for disrupting gender stereotypes and making the father-mother equation with the child flexible.

Chachi 420 has been often lauded as a performance-oriented film while its latent address towards breaking norms within the family is a dense addition to the wholesome broth.

Despite being married and a “badi pavitra naari” she struggles to ward off unadulterated attention from men everywhere. It is interesting to see a man experience the ordeals faced by a woman in her everyday existence.

It is difficult to decide whether to feel distaste towards Maharani’s sadism in Mahesh Bhatt’s Sadak or pity him when he assures the heroine that he is harmless since he has neither "roop" nor "rang". Maharani with her characteristic earthiness goes on to expound “uparwaale ne kaisa anyay kiya hai mere saath”.

Sometimes feminine, otherwise ruthless, Sadashiv Amrapurkar is a vision of terror and plight. Plucking the society of its righteous feathers, Maharani exposes the racket of trafficking women into prostitution in the 1990s with its roots way back in the past.

“Mardon ki seva karti hoon aur auraton ka dhanda” classifies the character as callous but definitively probes the wants of the patriarchal way of life. A society stigmatised towards eunuchs, despite the predicament of suffering not of their own doing, makes Maharani an aggressive persona.

“Randiyon our bharwon ko insaan samjha kisne?” she argues, explaining her destiny of being born to facilitate the flesh trade and not for any respectable position in society.

Nirmal Pandey, another hugely undervalued actor, received the Valenti Award for best actress in France along with Sonali Kulkarni for his role as a transvestite in Amol Palekar’s critically acclaimed Daayara. 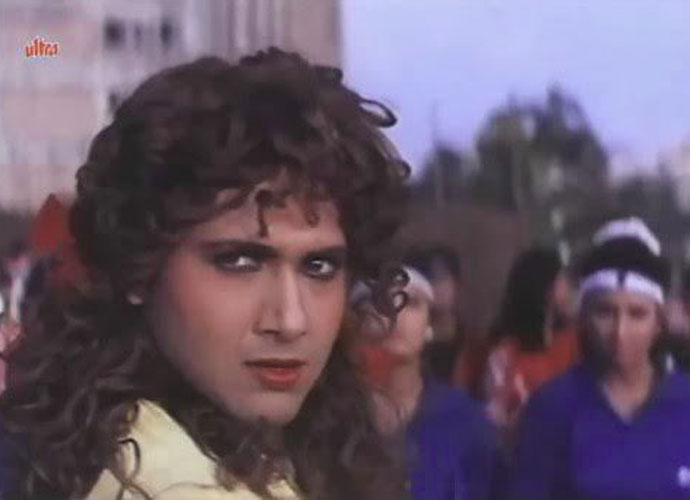 Ashutosh Rana in the crime thriller Sangharsh (1999) sends chills down our spine as the saree-clad Lajja Shankar Pandey.

Cross-dressing in Bollywood films has been a source of comic relief with delightful actors outlining nuances of the other gender.

Govinda and his gang of giggling girls straight out of the era’s American television in Shola Aur Shabnam and his pelvic thrusts to “chhayi ho banke khumaari ke aayi ab aunty ki baari” in Aunty No. 1 was met with peals of laughter in cinema halls in the 1990s.

When it comes to cross-dressing, the duo of Rishi Kapoor and Paintal as Dev and Salim in Rafoo Chakkar (1975), Narender Bedi’s hit film, was among the first to elaborate on same sex love. 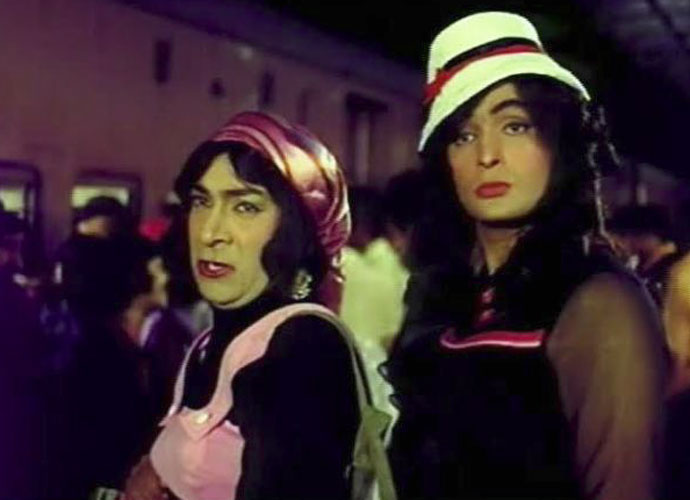 Rishi Kapoor and Paintal in Rafoo Chakkar were among the first to elaborate on same sex love.

Kapoor definitely brings his game in place in his urge to woo Neetu Singh. This time however in a mini skirt!

In Hong Kong (1971), Johar Mehmood’s seductive prowess in a saree and false hair is collaborated with him lip syncing to the legendary Shamshad Begum.

Also read: What Hinduism thinks of gay sex through the ages

Also read: To fully embrace the LGBT community, we need to come out of the closet

Post your comment
#LGBTQ, #Eunuch, #Bollywood films
The views and opinions expressed in this article are those of the authors and do not necessarily reflect the official policy or position of DailyO.in or the India Today Group. The writers are solely responsible for any claims arising out of the contents of this article.