Surgeon explains how Hindi movies have made medicine into a farce

Bollywood betrays a gross illiteracy and it's not funny.

In 1979, when I was an intern, I was counseling three sons about donating blood for their mother who had suffered a massive bleed. They looked towards each other, rolled up their sleeves and lay on a vacant bed next to their mother's and said, "Go ahead, doctor and take as much blood from our bodies and give it to our mother. But pray, save her life." No doubt, they had watched Amitabh Bachchan, Vinod Khanna and Rishi Kapoor donating blood which was directly transfused to Nirupa Roy in Amar Akbar Anthony (1977), albeit without any consideration for checking the blood groups.

This is just one, but one of the most glaring, example of how our movies handle medical issues - that's "filmy medicine" for you. 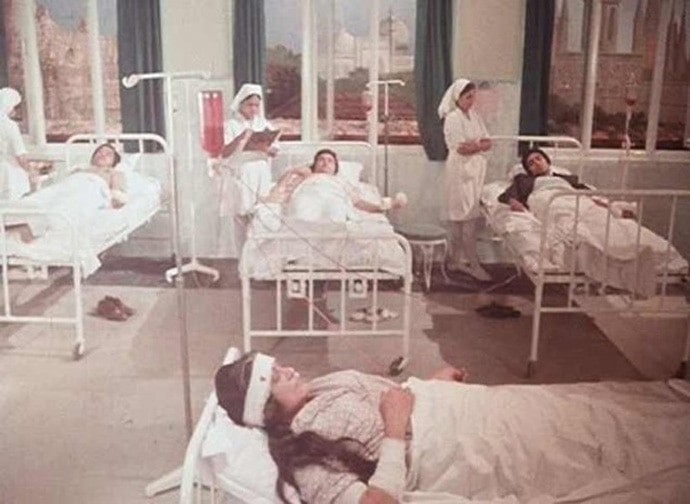 No doubt, some good "medical" movies have highlighted the social issues related to various diseases: for example, Khamoshi, 1969 (mania), Koshish, 1972 (deaf-mutism), My Brother Nikhil, 2005 (HIV/ AIDS), 15 Park Avenue, 2005 (schizophrenia), Taare Zamin Par, 2007 (dyslexia), U Me and Hum, 2008 (Alzheimer in young ones), Black, 2009 (blindness), Paa, 2009 (progeria), Guzaarish, 2010 (euthanasia or mercy killing), Once Upon a Time in Mumbai, 2010 (congenital heart disease) and Barfi, 2012 (autism). The tele-delivery conducted in 3 Idiots (2009) beautifully illustrated the excellent use of telemedicine for healthcare in remote and inaccessible areas or in difficult circumstances. Personal and professional lives of doctors have been addressed in movies such as Dr Kotnis Ki Amar Kahani, (1946), Anuradha (1980) and Tere Mere Sapne (1971). Dil Ek Mandir (1963) very successfully pictured the moral and ethical dilemma faced by Rajendra Kumar, playing the role of a doctor, who has to treat the husband of his former lover.

Bollywood movies are usually a potpourri of romance, action, emotion, melodrama, comedy and tragedy. What can be more tragic than death? Most patients who die in the hospital have a predicted downhill course; they are, therefore, on intensive monitoring and treatment and slip into death over hours or days. "Bas thodi sansein hi baki hain" is not an uncommon declaration by our filmy doctors. In Jannat 2 (2008), Emran Hashmi is declared to be critically ill by the doctor who asks the attendants to call his family members for the last adieu but, lo and behold, he delivers a few dialogues and then, and only then, dies. In Arpan (1983), the doctor performs even better; he declares that there is no hope for the unconscious patient but he will regain his senses for few moments (apparently to deliver a few emotional dialogues to the heroine before he dies). Rajesh Khanna's character has lymphosarcoma of the intestine in Anand.

Directors are not well aware of the medical education system either. In Tere Mere Sapne (1977), Dev Anand goes on to do MD after studying at home only; I wish I could also do my MS without spending five years away from home. In Yun Hota to Kya Hota (2006), the actor gets admission to the MS course in an American university after completing MBBS in India - while MS (Master of Surgery) is a surgical postgraduate degree in India, MS (Master of Science) is an engineering postgraduate degree in USA. In Ghajini (2008), dealing with amnesia, the neurologist is shown to be an MD whereas the superspecialty qualification is DM. In Jab Tak Hai Jaan (2012), Sarika, a neurologist (not neurosurgeon), operates upon Shah Rukh Khan, who has suffered a head injury.

Operations are a big favorite of movie makers - the bellow blowing in and out, blood dripping drop by drop in the transfusion chamber, instruments changing hands between the surgeon and the nurse. I am, however, yet to see a red bulb outside the operation theatre (OT) which glows while the operation is on and goes off just before the surgeon walks out of the OT or an OT with a glass door for relatives to view the ongoing operation. It is not infrequent to see the filmy surgeon operating with only gloves on (no gown, no cap, no mask). In Yeshwant (1997), as Nana Patekar is being operated, his wife walks into the OT even while the operation is on.

Most heroines are young; pregnancy, therefore, features in majority of our films. The heroine experiences a chakkar and collapses; the brother helps her to the bed as the anxious and worried parents crouch beside. In walks the filmy doctor, who feels the pulse and declares, "Badhai ho, yeh maa banne wali hai". If all the doctors get this simple diagnostic skill, what will companies marketing pregnancy kits do? In Astitva (2000), however, Sachin Khedekar does a very accurate calculation of the expected date of delivery (EDD) from his wife's last menstrual period (LMP) and proves her infidelity by guessing the possible date of conception which falls during a period when he was away from home. Rape in films very frequently used to result in an unwanted pregnancy, thus bringing ignominy to the heroine (or the hero's sister) but that was the time when post-coital pills were not available - no longer now!

Filmy treatments are very novel yet very successful. In Clerk (1989), Ashok Kumar, confined to bed after a heart attack, marches out after a "desh bhakti ka geet" plays on the transistor radio. In Rowdy Rathore (2012), pouring water on an injured head is proclaimed to prevent brain hemorrhage. The Indian Council of Medical Research (ICMR) must conduct an evaluation of the efficacy of such filmy treatments.

Violence is an essential ingredient of the filmy recipe and bullets fascinate the movie makers as well as the audiences. "Bollywoodically" speaking, extraction of the bullet lodged in the body is absolutely essential (though we doctors know that repair of the injury caused by the bullet is more important than just removal of the bullet itself). And the removed bullet must be dropped by the surgeon into the kidney tray making a metallic sound; then, and only then, can the hero survive and recover. It is also strange that while cronies of the villain and the poor policemen succumb instantly to just one bullet, the hero not only survives a barrage of bullets in chest and abdomen but also walks a distance or delivers a couple of dialogues before dying. In Dashavtar (2008), a bullet goes even further - it takes away the cancer from the voice box while leaving the voice intact. Pernicious anaemia was shown to be fatal in Mili.

Cancer, because of the imminent death, makes a good recipe for creating the scenario of gloom descending upon the family. The positive attitude of Rajesh Khanna, suffering from lymphosarcoma of the intestine, in Anand (1971) and Ranjita, with blood cancer, in Ankhiyon Ke Jharokhe Se (1978) were an inspiration to hundreds and thousands of cancer patients. But even a seasoned director of the calibre of Hrishikesh Mukherjee committed a medical faux pas when he showed pernicious anemia (not a cancer) of Jaya Bachchan to be incurable in Mili (1975).

Transplant has also been touched by some movies. In fact, "jigar ka tukra" has been a favorite phrase in our dialogues and preempted the concept of liver transplant by decades. Anuraag (1973) very beautifully covered eye donation by Master Satyajeet to Moushumi Chatterjee after his death. In Suhaag (1979), however, the altruistic spirit is taken much further to unimaginative and unacceptable limits when a repentant Amzad Khan donates his both eyes to his son Shashi Kapoor; which ophthalmologist would dare to remove (even one) eye from a living donor? In Coolie (1983), it is decreed, albeit incorrectly, by the doctor that only a living renal transplant can help; why not from a cadaver? In Diya aur Toofan (1995) Suresh Oberoi transplants the brain of dead Mithun Chakraborty into the skull of Madhoo who has suffered brain death; a feat not achieved in medical science as yet.

Delivery scene in 3 Idiots, one of the rare believable treatments of medical science in Bollywood.

Most Indians, including even those who are educated, are medically illiterate. Movies have a wide reach and visual medium makes a deep impact on the viewers. They have taught Hindi to non-Hindi speaking Indians; lyrics of songs in the 50s and 60s taught Urdu to one generation; now (what with Hinglish songs and even mixed language titles such as Jab We Met 2003) they are teaching English to each and every Indian. They can be an effective medium of spreading health education and awareness amongst the masses - may be even more effective than some of our heavily funded national health programs.

Barring a few exceptions, most movies dealing with medical issues have, however, failed in this regard and lost a golden opportunity to educate the lay public. Correct depiction of medicine and health related issues in the movies is important so as not to further miseducate our already less educated masses. Review of every movie by a medical board may be a preemptive step but is not a practical solution; a medical advisor to the director would probably be an easier and more practical option.

#Indian culture, #Science and Technology, #Medicine, #Bollywood
The views and opinions expressed in this article are those of the authors and do not necessarily reflect the official policy or position of DailyO.in or the India Today Group. The writers are solely responsible for any claims arising out of the contents of this article.

The writer is a professor of surgical gastroenterology at Sanjay Gandhi Post-Graduate Institute of Medical Sciences, Lucknow.