The city of then and present day Mumbai are different in their differences, yet the similarities are striking.

Showman Raj Kapoor's Boot Polish was one of the first depictions of Bombay in Hindi cinema. Beautifully filmed scenes were shot in "town", local stations including CST, Koli beaches and crossings in real locations and on sets. Just like Belu, seven-year-old India was struggling with abject poverty, expanding population and a feudal super structure.

Bombay, being the financial capital, was directly influenced by the crumbling state of India's economy. The living conditions in slums portrayed in Boot Polish were a grave comment on governance of the time. The films takes us to the 1950s' Bombay with cattle, buildings, automobiles, horses, beggars and astrologers who are essentially beggars. Throughout the film, Bela and Bhola either beg or resort to "Boot-Polish" as their way of sustenance. That underlines the government's failure to educate the citizenry.

Director Prakash Arora's Bombay in the 1950s and our present day Mumbai is different in their differences. However, the similarities are striking. The cosmopolitan nature of the city in Boot Polish, with people speaking multiple dialects like Marathi, Hindi, Tamil, Gujarati and English remains till date and is the very soul of Bombay. In a very significant scene of the film, Bhola and Belu's aunt promptly asks them, "tum mere kya lagte ho?". Bombay has always been notorious for its no-nonsense, even harsh pace where everyone has to survive with their individual identity.

That separates the bustling city from the rest of the country.The famous "pav" which is the mainstay for lakhs of Mumbaikars today, had its place in the erstwhile Bombay as "pav-roti". It is readily available at most counters, grocers, eateries and railway stations unlike the rest of the country. Chitku bhaiyya warns the children about the competitive nature of Bombay, where there are already thousands on the road polishing shoes to earn their bread.

The "struggler" in Bombay is Boot Polish's Bhola who is dying to showcase his talent and earn some money. He polishes the shoe of a sleeping man on a train after roaming around the entire day with no takers for his craft. 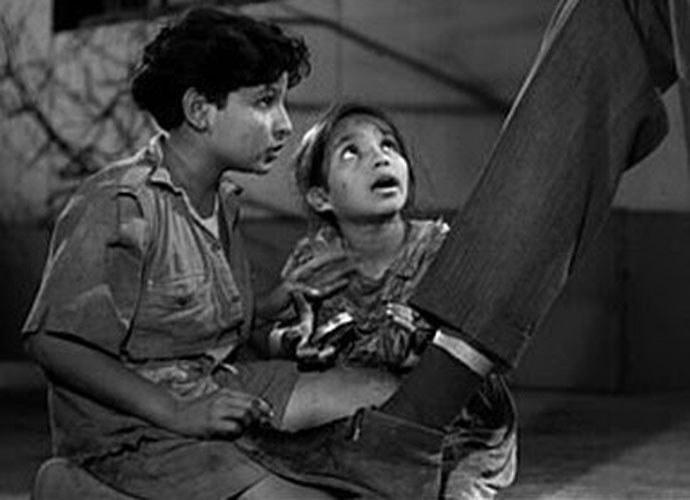 Towards the end, the rich and the poor meet and children from the streets get a home.

One scene in particular is as side-splitting and tragic where young Bhola is overjoyed to hear the astrologer forecast that he will polish boots all his life - "jootiyan ghisega jootiyan".

David Abraham aka John Chacha, a devout Christian in a tribute to Tansen, performs Raag Malhar with expertise. Possibly what was hindustani in him remained despite his religious conversion. Towards the end, the rich and the poor meet and children from the streets get a home.

It is no wonder that Bombay is called the city of dreams, isn't it? If you want to explore the look and feel of Mumbai when it was Bombay, we think this is the film for you.

Director Satyen Bose establishes Bombay in the very first scene, introducing his audience to "town" or old Bombay. The three brothers try to fix their beloved car while automobiles, double-decker BEST buses, trams, ambassadors and pedestrians outline the appearance of the city.

In the first song of the film, "Itni si baat na samjha zamana, Aadmi jo chalta rahe toh mil jaaye har khazana", lyricist Majrooh Sultanpuri exhibits Bombay's spirit. The show must go on. This is possibly the first lesson we learn about Bombay amid heartbreaks and broken dreams. With its galloping pace, the city rarely has the time to lament over losses. Of all metropolitan cities in India, Bombay is the city that never sleeps. The day and night garage in Chalti Ka Naam Gaadi adds details to that character.

In the dark of the night, Bombay has been known for sheltering criminals and imposters. The director takes us to that underbelly. The night that Manu runs from Renu's (Madhubala) house, he accidentally stumbles upon Prakashchand dropping off a famous businessman's corpse on the road.

The same crook proposes marriage to Renu. After fleeing the site, Manu lands in a sea of beggars sleeping on the pavement. Much like today, the homeless of the late 1950s' Bombay tainted the footpath with their sleeping bodies at night.

However smart as he is, he tricks Prakashchand with his hilarious antics and wins the annual car race. In Bombay, if style and cheating go hand in hand, it becomes art.

Most refreshing is the characterisation of women, especially the heroine portrayed by the ethereal Madhubala. Both she and her friend fancy Kishore Kumar and Anoop Kumar, men they have recently met, and ask them out on dates. Post 7 pm is curfew time for Manu but Renu doesn't seem to be bothered by the setting sun. The film shows how Bombay in and around 1958 was working towards steadying the position of women in society. Most refreshing is the characterisation of women, especially the heroine portrayed by the ethereal Madhubala.

In fact, Renu first meets Manu at 2 am at night when her car breaks down while it is pouring. She is comfortable in a translucent saree and is an artist who stays out late and drives back home herself. That kind of safety is an unvarying asset of Bombay.

Renu's father is adorable in the way he has brought up his independent daughter. As much as he wants her to get married into status and security, he is adamant on the condition that his daughter approve of it. Towards the climax of Chalti Ka Naam Gaadi, he yelps: "Beti ki marzi ke khilaaf kuch nahi hone dunga."

The film ends with all three couples seated and Madhubala at the wheel. That is a potent statement on women's liberation in the 1950s' financial capital of India.

For all feminists and others in general, the film is a treat for it's comic timing, performances, music and lyrics, but what subtly buttons up Chalti Ka Naam Gaadi is the admirable position of spirited independent woman in society. Watch it again, this time on a different set of wheels!

Every word by Majrooh Sultanpuri is a work of gold, as relatable today as it was in 1956 and OP Nayyar brings it all to life.

(Baaton Baaton Mein is Naireeta Dasgupta's maiden project with Gaurav Dwivedi, an FTII alumni. It is a series on yesteryear's Bollywood, trivia and music.)

Post your comment
#Bollywood, #Bombay
The views and opinions expressed in this article are those of the authors and do not necessarily reflect the official policy or position of DailyO.in or the India Today Group. The writers are solely responsible for any claims arising out of the contents of this article.