Screenwriters haven't got their due in Bollywood. But finally, things seem to be looking up

One evening, actor Aamir Khan was writing an email and his wife Kiran Rao was waiting for him to finish, so they could step out for dinner. In his study, she idly picked up a script from the huge pile on the table. She put it down and picked another. Then tossed it aside and picked a third one. After a few minutes, she started giggling, which turned into laughter and then got louder. Khan got curious and asked her what she was reading. As Rao explained, he left his work midway and joined her. Delhi Belly was made because Kiran Rao, while waiting for Aamir Khan one day, flipped through the scripts lying on his table. (Photo: Screengrab)

Within minutes they were in stitches, curling on the floor, gasping for air. They cancelled their dinner engagement to finish reading the script. That very night, Khan called up the phone number mentioned on the document, and introduced himself to the man at the other end, saying they had liked the script and would want to turn it into a movie. “Can you come meet me sometime soon?” Khan said.

A flustered voice at the other end declared he had spent the last two months in Mumbai with the sole purpose of meeting Khan, and it was just a few hours ago that he had finally landed in Los Angeles. “Ummm well, if it’s not too much trouble, would you mind coming back?” Khan replied.

Akshat Verma flew back from LA, and that is how Delhi Belly was made.

Should one be grateful that Khan kept his wife waiting, or aghast at the arbitrary nature of how scripts are selected? I’d say the latter.

Welcome to the inside world of the Hindi film industry.

The methodologies of the industry — which without doubt is the biggest influencer in India and the Indian community anywhere — are unduly capricious. And we are not breathing fire about nepotism or casting couch here. This is about simple things — importance of story, script, and writers in film-making. Mind you, the writer is not the same as the director. The director is the narrator of the story, often confused with, but not necessarily, the writer.

Script and screenplay writer is the person (can be more than one) who conceptualises the story; visualises the scenes, develops the characters and is often completely disconnected from the director. A director stitches all these elements together with music, actors, cinematography etc., with multiple teams and agencies for the visual medium. He is the anchor for the execution.

One would say a good film is the manifestation of a good story. But for the film producer, the writer is way down the pecking order — be it title credits, financial remuneration, copyrights or while making massive alterations in the script.

In fact, the first document a scriptwriter has to sign is to give away all copyrights of the story to the production house/studio. Essentially, after all the creative work and research, the writer has no say in how his story will finally reach the audience. If there is a re-production of the story, say in another language or in another format (film turning to web-series or vice versa), the writer gets a negligible single-digit royalty percentage, no matter how well the film does.

Bad as it sounds, this is not even the worst thing for the writer. It is the complete takeover of moral rights of the story that hits him in the gut. The studio may make a woman character suffering with a debilitating ailment in the original script perform a skimpy item number in the film, or turn the anti-hero into a noble character towards the climax, and legally, the writer cannot raise even a feeble voice of protest.

Some perspective comes from a few industry veterans, who are quite happy these days. They claim the industry has made epic progress now that the director and actors can actually read a written script before they start shooting. “Back in the day, the script was decided on the sets, and often never written. So now, come on, a few digressions here and there are the producer’s prerogative,” an old-timer says.

But the past cannot be a justification for what is essentially not right. At long last, times may be actually changing in this glamour and box-office driven industry. 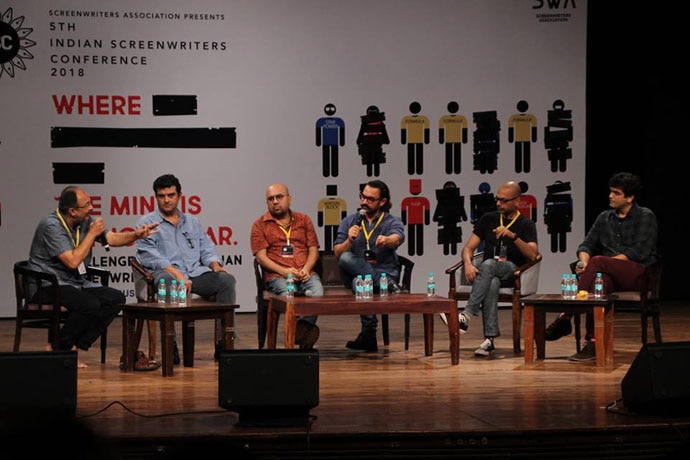 Aamir Khan with screenwriters and producers at the fifth Indian Screenwriters Conference, which began on August 1.  (Photo: Facebook/Screenwriters Association)

At the fifth Indian Screenwriters Conference , held in Mumbai from August 1 to August 3, veteran screenwriter Anjum Rajabali, joined by Aamir Khan, Amit Masurkar (Newton’s director) and Delhi Belly’s Verma on stage, and scores of writers in the audience, prevailed upon Siddharth Roy Kapur, president of the Film and Television Producers’ Guild of India, to work with the Screenwriters Association on basic guidelines to safeguard legal and intellectual property rights of writers.

Kapur agreed to get the powerful grid to favourably consider the demands, which is being seen as a major stride forward.

A small clause in a contract document will mean a big leap in the quality of films Hindi cinema produces, even though it will be a few years before the real impact of this will trickle down.

Not only for the thousands of existing and aspiring writers, but to each one of us, the billions out there who watch films, TV soaps and web-series — churned out by this rather self-absorbed industry, anchored in Mumbai. Writers from all over the country bring their original stories for rendering in this popular medium, but when the “formula” takes over, mindlessly titillating shows are dumped upon the audience.

While web-series have opened up space for more independent content, but in terms of mass impact, they are still not a patch on the 70-mm or prime time general entertainment channels (GEC).

Khan at the ISC said that when he started his career, he chose films simply on the basis of the story. “I thought if the story is good, everything will work out. I was wrong. Just a good script wasn’t enough. For a good story to be heard as it should be, it has to be rendered well. The director, the production house, co-actors, every element is important,” he said.

Responsible rendition in popular media matters. Not just for the creative satisfaction of “jholawala” writers, but because it shapes societal mindsets, because Indians have a right to know the real stories of India, because they contribute to a robust democracy, because this rendition is a documentation of history, because we are so diverse, and the only thing that unites us is cricket and Bollywood. Because cinema is a powerful medium, and “with great power comes great responsibility”.

Also read: This is my Mulk — what I liked, and differed with, in this remarkable film

Post your comment
#Writers, #Producers, #Bollywood, #Fifth indian screenwriters conference
The views and opinions expressed in this article are those of the authors and do not necessarily reflect the official policy or position of DailyO.in or the India Today Group. The writers are solely responsible for any claims arising out of the contents of this article.