To eat like a glittering royal: A mansion in Vadodara now serves authentic regal Maratha delicacies

The historic Vadodara mansion showcases both the luxuries of royal life, as well as the richness of its taste reflected in some extraordinary cooking.

The royals of India have always intrigued people and their lifestyle, fashion and food have always fascinated.

When one thinks of the royals of India, one thinks of style, luxury and show, palaces — and great food. Earlier, these things could only be imagined, but interestingly, now with a number of heritage hotels and home-stays, one can also experience the life of the kings of yesteryears. In Vadodara, the first royal heritage home-stay of Gaekwads has opened up at Madhav Bagh recently. Located in the heart of the city, this is a royal mansion built in the Indo-Saracenic style by Shrimant Madhav Roa Gaekwad in 1892.

This property is named after Madhavrao Gaekwad, the first cousin of Mahrajah Sayajirao of Baroda, who was one of the three premier princes to be accorded a 21 gun salute. When Madhavrao built this place, he imported a fountain from London which still adorns the front lawns of this property — and is still operational. 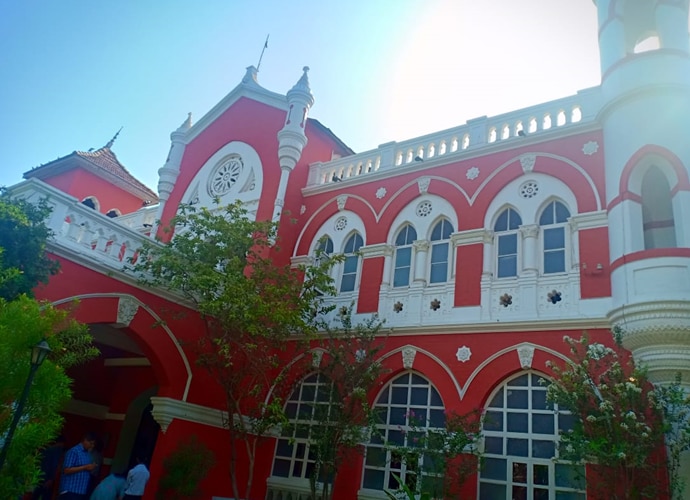 The Maratha rule over Vadodara started with Peshwa Bajirao I who granted Baroda state as a fiefdom to Pilaji Rao Gaekwad. Pilaji Gaekwad led the conquest against Mughal rule in this part of Gujarat and won in 1721. Later, the Gaekwads became independent rulers of Baroda Princely state. Sayajirao and Madhavrao belonged to the Kavlana branch of the family, brought to Vadodara from Malegaon in Nashik district.

Now, for the first time, the place has opened up also for royal Maratha food made in-house under the watchful eyes of Indrayani Shivraj Singh Gaekwad who, with her husband Shivraj Singh Gaekwad, lives on the first floor of Madhav Baug. Shivraj Singh Gaekwad explained, “Earlier, the Archeological Survey of India had its office on the ground floor. We got the property back in 2002, so then, I decided to renovate the place and do it up — I wanted that people have an opportunity to enjoy royal stay and royal cuisine. Also, traditionally, we have always been excellent hosts.” Mr Gaekwad had worked at the Taj Group of Hotels and is therefore familiar with the hospitality business. 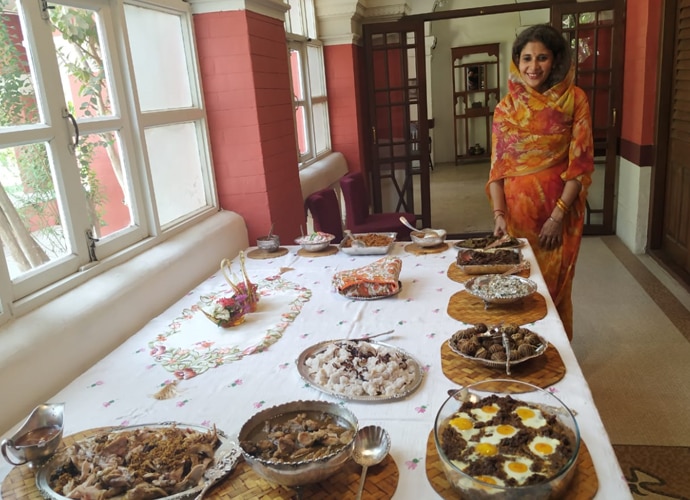 Indrayani Gaekwad, his wife, is from Kolhapur. She belongs to the Ghatge family of Kagal (Kagal was the home of Shahu Maharaj of Kolhapur princely state), and is related to the Phalke and Mahadik families of Gwalior, the Ghorpade ruling family from Sandur princely state and the Thanjavur Marathas. Importantly, Indrayani is an awesome cook whose food is not just pure royal Maratha cuisine, but also has influences of Konkan and Thanjavur regions.

The history behind such cuisine is immense. Maharaja Gaekwad of Baroda state was one of the three princely states to be awarded a 21 gun salute during the Coronation Durbar held in December 1911 in Delhi to commemorate the coronation of King George V. The other two states were the Nizam of Hyderabad and the Maharaja of Mysore. Later, Maharaja Scindia of Gwalior and the Maharaja of Jammu and Kashmir were upgraded to a 21 gun salute status.

You might think with a history of this magnitude, the lifestyles of such rulers would remain forever closed-off. The opposite is now true. Madhav Baug is the first such royal heritage house in Vadodara to offer heritage home-stay in this large two-storey structure with sprawling lawns. 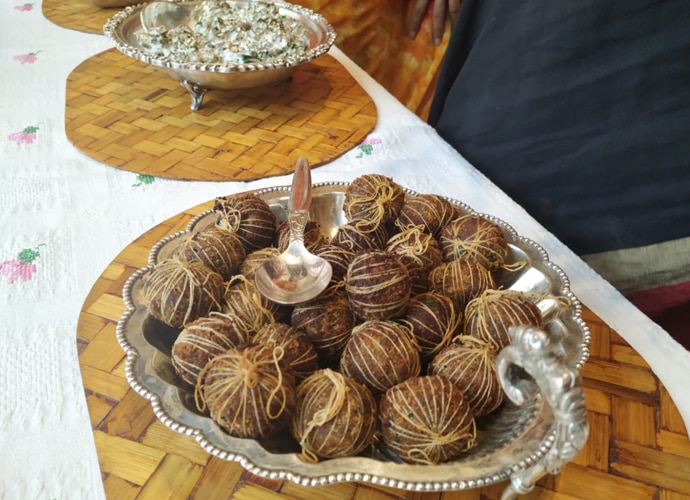 A Most Unusual Feast: Dining like a royal, you come across both luxurious and very surprising dishes. (Photo: Satyen Gadhvi)

The food can be similarly democratically accessed. A person can book in advance for a meal, lunch or dinner and get it custom-made according to one’s food preference. Both vegetarian and non-vegetarian meals are available. One can also choose the protein from chicken, fish, mutton and prawns and enjoy a tasty and unique meal in royal splendor with antique furniture, royal pictures and paintings adorning the walls, pure silverware sparkling before you. Eating in the dining room, one really gets a special feeling of luxury from yesteryears, but with modern comfort.

All the food definitely has a very different flavour — one that most people haven’t had the opportunity to taste, so eating here is a unique experience. 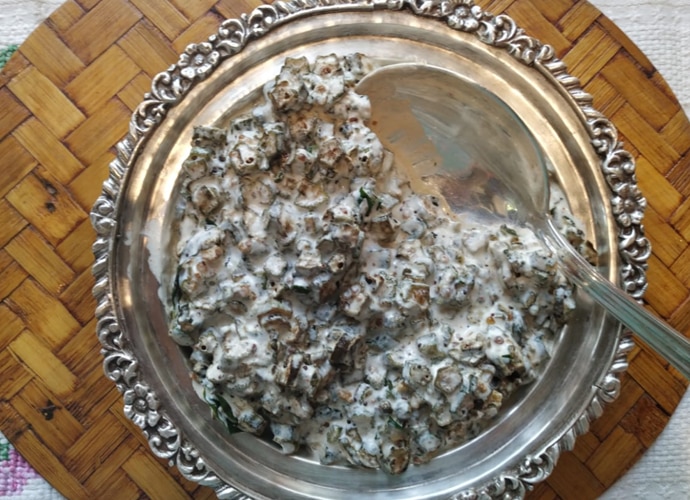 A pinch of Hing (Asafoetida)

Cut the Okra into fine round pieces. Add a bit of salt in it and deep fry them till crisp. Remove on a kitchen towel to cool.

Beat thick yogurt and add salt and red chilli powder in it. If the yogurt is too thin, drain the water out of it. Keep the yogurt mixture aside.

For the tempering, take 1.5 tablespoons oil in a small thick kadhai and heat it. Add curry leaves which have been washed and dried, hing and mustard seeds in it. When the whole mixture starts crackling, add it to the yogurt mixture and beat it well.

Just before serving this dish, add the fried Okra to the yogurt mixture and serve it.

This can be eaten with rotis, parantha — or even as an accompaniment with rice and dal. This dish can be kept without refrigeration for two days — so it’s excellent to take along while traveling.

Wash all the meat and put it in a pressure cooker. Add the turmeric powder, ginger garlic paste, salt and whole spices and half a cup of water and cook it till it’s tender but not overcooked. (If you are not sure how long to cook the meat-Keep the cooker on high flame till the first whistle and then reduce the flame and cook for 5-7 minutes. Release steam and open the cooker).

Dry roast the grated or desiccated coconut. Cool, and then add chilli powder, garam masala powder and a little salt and mix well. Keep aside.

Deep fry the mutton pieces in oil, then add it to the coconut mixture.

For the tempering, add a little oil (1 tablespoon) in a kadhai or wok and heat.

Once the oil starts crackling, mix this tempering to the mutton and coconut mixture and stir well.

When it cools down just a bit, add lemon juice and serve.

Also Read: The way we feel depends on what we eat and it’s high time we accepted it

#Delicious food, #Royal maratha palace, #Maratha cuisine
The views and opinions expressed in this article are those of the authors and do not necessarily reflect the official policy or position of DailyO.in or the India Today Group. The writers are solely responsible for any claims arising out of the contents of this article.