The night is dark, and full of spoilers.

The more things change, the more they remain the same.

That seems to be the moral of “Stormborn”, the latest episode of Game of Thrones. Seven years in the land of Westeros have taught us some things: politics here is a dirty, violent game, only slightly worse than the world we live in; people who hold fast to ideals and dreams end up enjoying brutal deaths; every invitation, whether to a wedding, or a simple request for fealty, is laced with liberal amounts of poison.

But with characters like Daenerys and Jon Snow, the more “conventional” fantasy heroes in this land of terribles, ascending to important, powerful positions, we might have been forgiven for thinking the horrors of Westerosi family feuds would abate, and they’d pull together to build a better future, hopefully defeating the White Walkers along the way. Indeed, when “Dragonstone” ended, it almost looked as though Dany had nothing stopping her from just sauntering into a severely weakened Cersei’s ‘domain’ and simply taking it for her own. Boy, did this episode prove us wrong.

To summarise the “big” politically relevant events of “Stormborn”: Dany, secure in her birthplace Dragonstone, builds a battle plan that, she hopes, will help her gain the Iron Throne without unleashing too much bloodshed. She does not want to be "queen of the ashes". Olenna Tyrell, a very welcome sight for most viewers, seems to think she is being overly optimistic, and as it turns out, she may be right.

The over-easy plan, of letting the Dornish lay siege to King’s Landing with the help of Yara Greyjoy’s fleet, gets burnt to a crisp, literally, by the sudden, brutal arrival of Euron Greyjoy, who not only defeats his niece’s armada, but also kills off two hissing Sand Snakes, scares Theon away in a burst of PTSD, and takes Yara, Ellaria and Tyene hostage. Dany now has no navy, and possibly, no siege-friendly soldiers.

Up in the north, Jon has received a missive from Tyrion Lannister, asking him to come and swear fealty to the Mother of Dragons. Jon decides to go, and in a truly glorious move, leaves Sansa, the only “Stark in Winterfell”, in charge of the North. Sansa looks both shocked and pleased by this move, and Littlefinger, still cherishing hopes of being with her, seems quite smugly thrilled. Sansa now has ample opportunity to practice the skills she’s learned from her many political mentors, an illustrious list that includes names like Littlefinger, Tyrion, the Tyrell women, and, perhaps most worryingly, Cersei Lannister.

Back in King’s Landing, Cersei is dabbling with dragon killing devices, while Jaime marshals supporters for his army. He seeks to appoint Randyll Tarly, father of Samwell, as his general, thereby asking him, not so nicely, to turn his back on his oath of fealty to the Tyrells. “You also swore an oath to the crown,” Jaime reminds him, when Tarly tries to protest. It’s not often that we see Jaime making use of his political weight and savvy to convince people that they really want to follow his advice/orders, since he is, primarily, a martial, supporting figure for the more obvious game players.

Perhaps its because he shows this side of himself so rarely that it is all the more impactful; Jaime, usually a wise-cracking, seemingly genial character, reveals that he too is a Lannister, and unafraid of using the political wiles he has learned (perhaps unconsciously) from a father with whom, he believes, he has nothing in common.

Here we come to the theme: no matter how far characters run away from it, and disavow all connection with it, the past always comes again. Though the council that sits around Aegon the Conquerer’s map in Dragonstone is made up of a number of powerful women, a contrast to Robert Baratheon’s Small Council in Season 1, the worries are the same: how best to rule, how best to remove an inconvenient female from the throne (in Robert’s case, it was how to kill a pregnant Dany, an issue which raises its head in the opening salvos of “Stormborn”), how to gain and retain loyalty.

The ghosts of Dany’s family haunt her; every threat she makes, every flare of anger she masks with cold words, carries shades of the Mad King, and rouses fears in her listeners, shaking, at times, their belief and trust in her. Cersei uses this fear to her advantage, reminding the remaining courtiers in King’s Landing of the last Targaryen ruler, and the woes he brought to Westeros. Sansa brings it up as well, in her conversation with Jon, speaking of their grandfather and uncle, who lost their lives at the whims of Aerys, the Mad King.

In Westeros, the past cuts as deep as Valyrian steel, even when it seems to offer the illusion of comfort. Arya, on a journey back to Winterfell, literally meets her roots in the form of Nymeria, the direwolf she drove away in season one. When Nymeria turns her back on her, Arya’s face falls, the tentative seeds of happiness and surety she’s started to gain sliding off her with incredible swiftness. 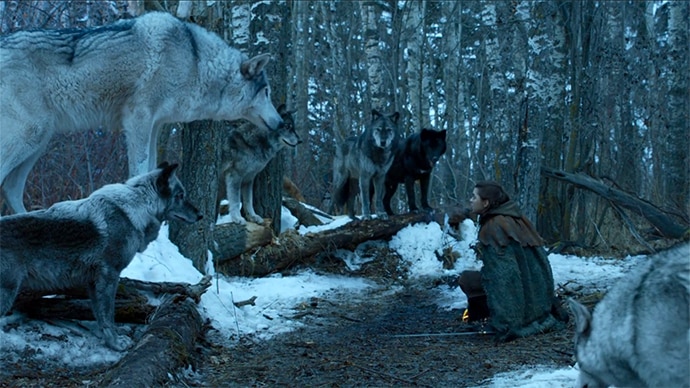 The progress she’s made over the past two seasons, the slow reclamation of herself as Arya Stark, vengeful daughter of the north, disappears as she says “It wasn’t her,” a statement that could apply as much to Nymeria as it could to herself, a girl who tried, for a long time, to be “no one.”

The past and its brutal events similarly unmans Theon Greyjoy, who stands paralyzed before his taunting uncle, unable to move forward and save his sister. Rather than face failure, Theon dives off the side of the ship, and weeps in the water as he stares at the carnage around him. All the progress he’s made, the slow reclamation of his self, disappears in one moment, leaving him as hobbled as he was as Reek, barely human slave to Ramsay Bolton. 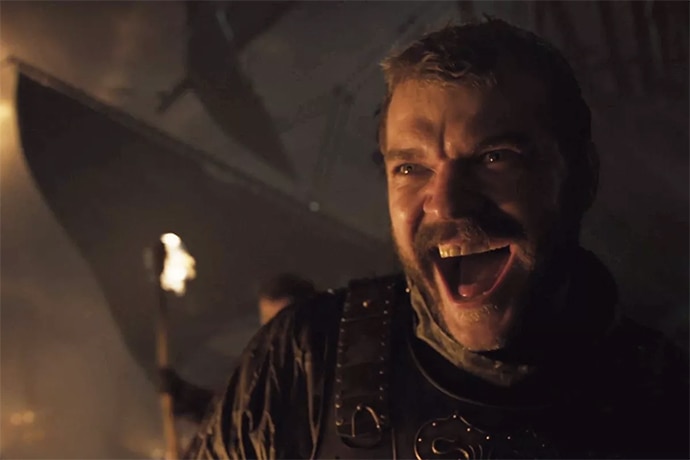 The only person, at this point, who seems to take comfort in history is fittingly Samwell Tarly, who is using theories and legends to heal people, as well as to find a solution to the coming of the Long Night. Sam’s always been a boy who found comfort in books over people, the least lord-like of the major lords, and it will be the greatest irony (as well as the greatest fantasy cliché) if it’s his knowledge and sheer dedication to his beliefs that saves this world.

If this were Middle Earth, it might be a safe bet to say he’d win through and end up tossing the Night’s King into a pit of dragonfire. But since it’s Westeros, we have to pray that he lives long enough to make it happen.

Post your comment
#Arya Stark, #Daenerys Targaryen, #Stormborn, #Game of Thrones
The views and opinions expressed in this article are those of the authors and do not necessarily reflect the official policy or position of DailyO.in or the India Today Group. The writers are solely responsible for any claims arising out of the contents of this article.