20 years of Harry Potter: The greatest spell the boy wizard pulled was to change us

Perhaps the books’ greatest triumph is that it got a generation of children and adults to read more.

Unlike the rest of the world, I won’t be raising a glass of Firewhisky and celebrating 20 years of Harry Potter. For me, it’s been 17 years.

I came to the wizarding world late – perhaps my Hogwarts letter got mixed up in Owl Post or Hagrid got distracted by a more interesting creature and forgot to knock down my door and invite me to school. Which is why I only met The Boy Who Lived at the turn of the millennium, when I got fed up of seeing the newspapers buzzing about these strange purpley-yellowey-books with lightning-shaped fonts on the cover.

I toddled off to my second-hand bookstore, tucked away in Mumbai’s own Diagon Alley (Yes, yes, I know, Crawford Market is also Diagon Alley, okay), the extremely busy Vile Parle West market and asked for the Harry Potter book. The lanky bookseller, with one long fingernail, was well-acquainted with my book tastes and so was quite puzzled, but passed me a copy of Harry Potter and the Prisoner of Azkaban with a shrug. “Badha bau le che,” he said in Gujarati (everyone’s buying this one a lot).

JK Rowling had me at “Harry Potter was a highly unusual boy in many ways”. I knew I had stumbled onto a highly unusual story. A protagonist who wasn’t spectacular – he was nerdy with really terrible vision, middling grades, and with friends who were funnier and cleverer than him. But as Professor Dumbledore pointed out, “It matters not what someone is born, but what they grow to be.”

Perhaps the books’ greatest triumph is that they got a generation of children and adults to read more. In 2000, The New York Times Book Review announced that they planned to print a separate best-seller list for children’s books. “The change is largely in response to the expected demand for the fourth in the Harry Potter series of children’s books,” editors at the Book Review said. As the Salon put it, “It takes a wizard to change the course of the Times.” Today there’s a thriving children’s book publishing industry, in India and across the world, keeping the bestseller list populated.

Clever marketing keeps the books alive, with newer editions lining bookstore shelves again and again. But honestly, these books don’t need any sort of publicity stunts. They are classics. They have changed the way we read, what we read, and at the same time got (well, at least some) us to duel prejudices. A 2014 study, The Greatest Magic of Harry Potter: Reducing Prejudice showed that children who read the books were more open minded towards immigrants and homosexuals, for instance. And of course, Rowling’s Twitter handle keeps fighting the good fight.

The books have not only inspired a generation to read, but also stoked our imagination. Muggles dress up as witches and wizards, throw Potter-themed parties, play actual Quidditch matches. Our vocabulary is richer with words like Riddikulus and Dementors, all of which perfectly describe everyday scenarios.

More recently, researchers Rajashree Khalap, Javed Ahmed, and wildlife photographer Sumukha Javagal discovered a new spider species in the sacred groves of the Kans forest of Karnataka. The unusual spider has been named Eriovixia gryffindori, because it looks like the Sorting Hat. For muggles, the hat belonged to Godric Gryffindor, one of the Hogwarts founders. 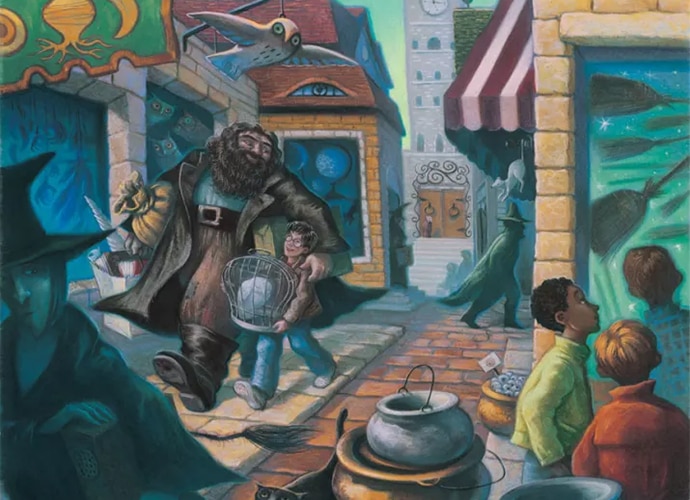 That’s what the books did – they reinstated our faith in the fact that words are “our most inexhaustible source of magic.”

As I turn the Time Turner on the books, it’s like a slideshow of memories: being mercilessly teased for being a postgraduate student who read children’s books, pretending that the books were part of my reading list for the creative writing class, my friend hugging me and crying because Cedric Diggory died (oh really, if you don’t know this already, then too bad) and us offering to put the Goblet of Fire in the freezer.

Sitting in the local train and sorting ourselves into Harry Potter characters’ way before Buzzfeed came up with quizzes that told us “What Harry Potter Character Are You?”. Buying Harry Potter and the Deathly Hallows and holing up in my house and refusing to read the news or talk to anyone.

Crying over Dobby, Sirius, Dumbledore, Hedwig, an endless list. Laughing at Ron’s jokes and nodding fervently at Hermoine’s books and cleverness. Throwing up my hands in exasperation while watching Harry Potter and the Half-Blood Prince (why did Ginny bend down to tie Harry’s shoelaces?) and watching the press show of the last film before the rest of the world got to see it. Watching my friend’s confounded face as I bought an extremely expensive figurine and telling him, “No, no, it’s not for my nephew, it’s for me.”

Marketing hoopla aside, what keeps the Potter books special for me is their ability to be my patronus when dementors surrounded me. Rowling’s words are like a swig of warm, comforting Butterbeer on days that are cold and bleak. When I suffered from a personal setback, and sunk into depression, it was the phrase – “It does not do to dwell on dreams and forget to live” – that reminded me that it’s okay if not everything went as planned.

With new books came new stories, new loves, new sadness, and new dreams. And now these memories are curled up in my pensieve, allowing me to examine them at leisure.

Happy Anniversary, The Boy Who Lived.

#JK Rowling, #Children's Books, #Harry Potter
The views and opinions expressed in this article are those of the authors and do not necessarily reflect the official policy or position of DailyO.in or the India Today Group. The writers are solely responsible for any claims arising out of the contents of this article.