The whys and whos of extramarital affairs in Bollywood

Indian cinema's tryst with adultery through the ages.

Guru Dutt aka Bhootnath, is a servant who falls in love with his mistress, the enigmatic Choti Bahu portrayed alluringly by Meena Kumari. She is the wife of the youngest son in the house who spends most of his time drinking at whore houses as she battles loneliness.

That makes for the plot of the film which moves towards the climax ultimately bringing about the the ruin of the household. Disloyalty towards your wife in the Zamindari India was treated with as lack of caution as by Chhote Sarkar in Sahib Bibi Aur Ghulam. 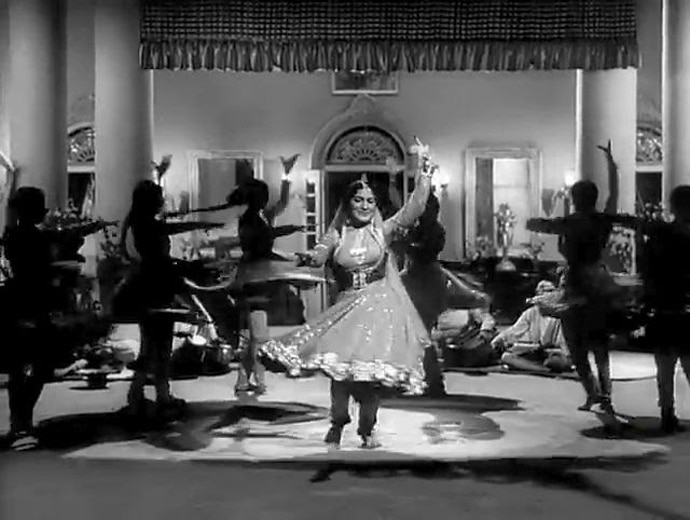 When Guru Dutt's Sahib Bibi Aur Ghulam was submitted for the Oscars, the Academy had written a letter to Guru Dutt saying a woman who was portrayed as an alcoholic was not a permissible scenario in their culture. Why do we keep calling ourselves intolerant again?

Guide (1965): The dysfunctional marriage of Marco and Rosie

Waheeda Rehman's "Aaj phir jeene ki tamanna hai" posed a serious challenge to her dilapidated marriage with Marco. For all Marco haters, this must be said that the poor guy's only fault was he was paapdi chat served on a rice plate.His marriage not only was crippled because he was much older and haughty but because he just did not belong with Rosie. Miss Nalini belonged with Raju Guide. 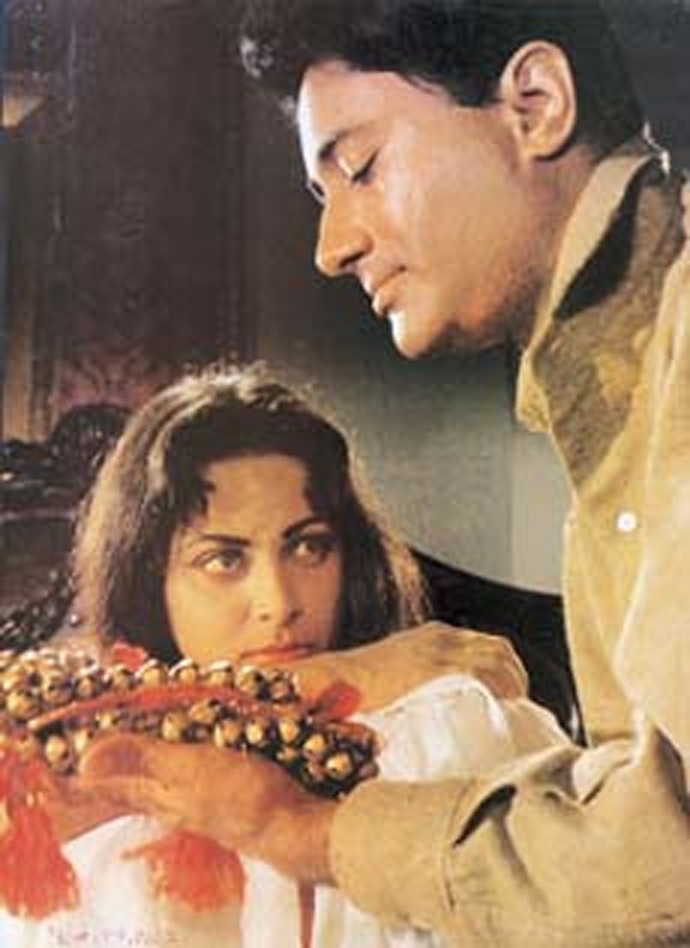 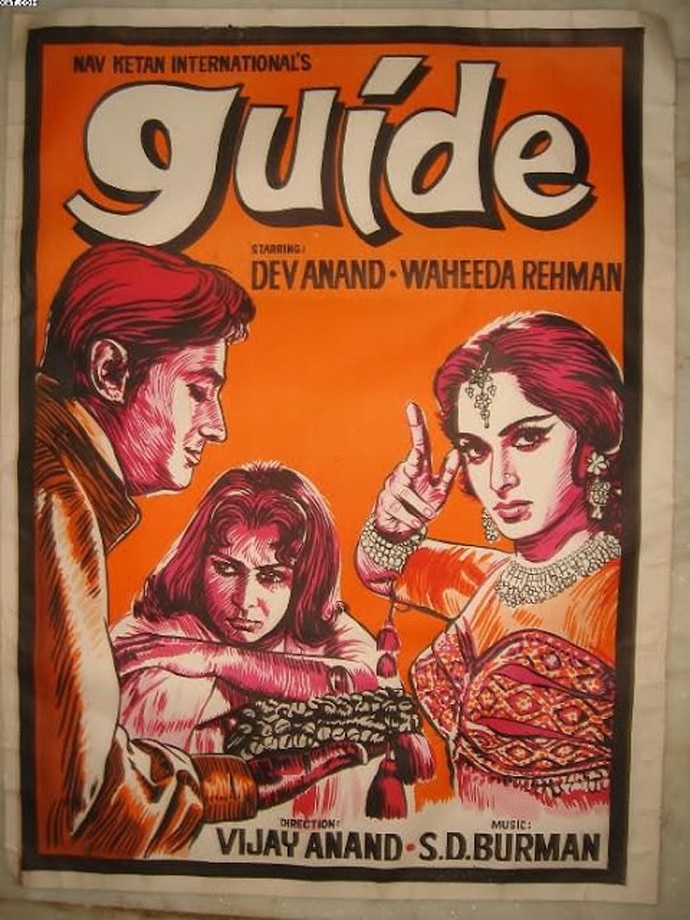 Within transitions we conveniently forget her husband and open up to the possibilities of an extramarital affair with Dev Anand. However, as realistic as things can get, our Rosie and Raju Guide fall apart as their characters evolve in the story.

It is said that director Vijay Anand was horrified when he first read the script. He refused twice to direct a film that would ruin the image of the country abroad. It was only upon the third attempt by Dev Anand that he agreed.

If there is a film devoted to the tragic flaw cursed on every man on earth, it is Pati Patni Aur Woh. Blood rushes to only one organ in the case of an emergency. Life is as beautiful as was for Adam and Eve until the apple arrives. 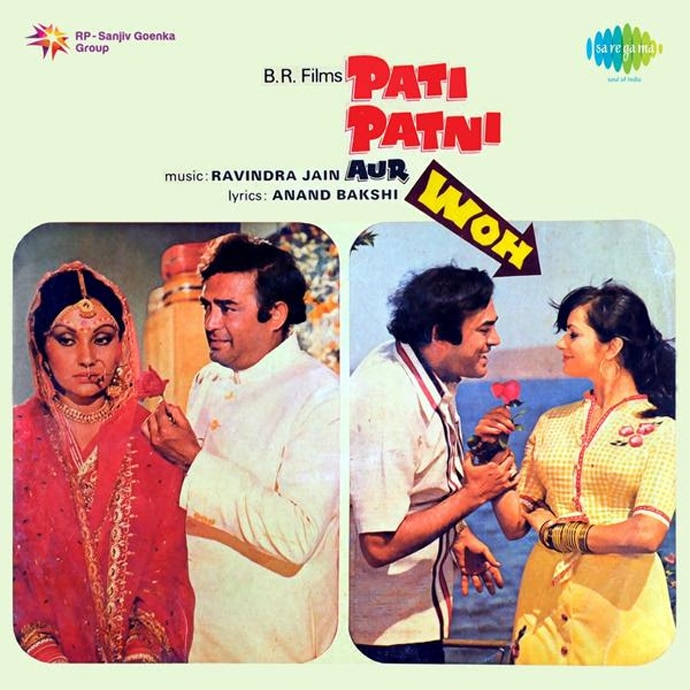 Director BR Chopra does not enter in a dysfunctional marriage and introduce Nirmala. Rather, she is having an affair with her boss Ranjit unaware of his picture perfect-marriage with Sharda. What Ranjit's antics don't give away, his green diary does. Towards the climax, we come a full circle as Chopra entertains us with a comedy in a tragedy. Incidentally, this was the only comedy he ever made.

Griha Pravesh (1979): When the husband preferred tea over coffee

A couple bonded by an arranged marriage live their lives supported by the dream of their future. A future that has a better house, better prospects. Their rented life makes them cut back even on their honeymoon among other things. “Boliye Surili Boliyaan”, a duet by Bhupender Singh and Sulakshana Pandit, captures the essence of the young couple’s admiration for each other. A decade passes by while a son has been consummated. However, the beautiful typist Sapna from office breezes in, increasing the hero's zest for her and his life considerably. 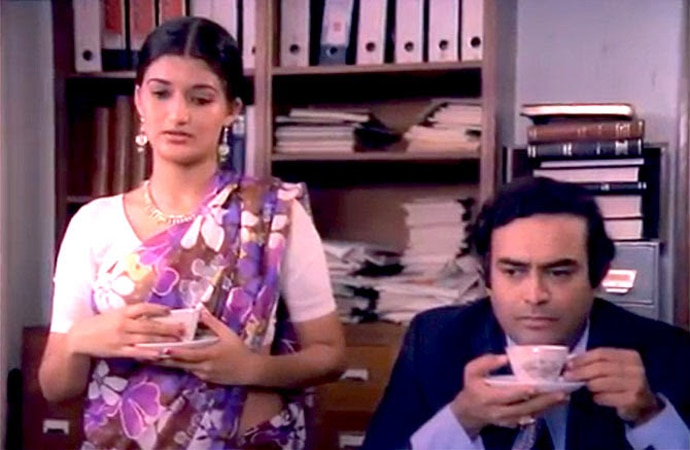 Tea takes over coffee as Sapna (dream) takes over Manasi (human-like). Intricacies of both the relationships are filmed with detail, emotion and urge. The sacred institution of marriage is protected in the end, when destiny takes its course and a wedding procession separating the married couple from the "other woman" clarifies director Basu Bhattacharya's point of view.

Basu Battacharya's introspective film on marital discord in an urban setting Griha Pravesh (1979) was a part of a trilogy, which included Anubhav (1971) and Avishkaar (1973).

One of the most controversial extramarital affairs of the '70s Bollywood was plated by director Yash Chopra with the same set of actors involved. Rekha and Amitabh Bachchan did not work together thereafter. It is safe for us to evaluate the reasons. A roaring affair between Amit and Chandni is stirred in ethereal poetry and music.

Jaya Bachchan's poise and sensitive performance questions trust over love in a compact scene between the lover and the wife. Silsila is a journey of characters baked and semi-baked. It looms over marriage, trust, lust, impulse and the shadow of a bygone affair. Priya, Chandni and Amit make for a triangle infused with passion and solidity of will. Sanjeev Kumar initially unsure of portraying the good natured doctor and husband of Rekha is won over by Yash Ji making for a stellar yet contained performance. "Rang Barse" is the perfect amalgamation of aphrodisiac and less-expressed emotions in a marriage. The director wisely builds on the extramarital affair by pitting all four leading characters against each other in the song.

Inder and Pooja's suburban marital bliss hits an iceberg as Inder becomes increasingly besotted with Kavita, who saves his life in ways more than one. Pooja is an orphan who had been missing the security of a home since her childhood. Her only folly was that she thought a home and husband were synonymous.

Pooja leaves not Inder but their home, which was funded by Kavita's generosity. In the letter that "Bai" carries to Inder, Pooja promises that she will be there, whenever he would come looking for her. Inder does come, only after being cast aside by Kavita. 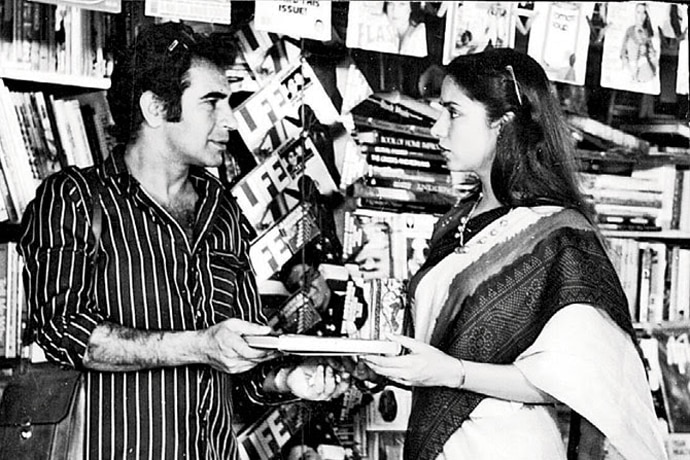 He pleads with Pooja to take him back. She quickly puts him through a question-and-answer round and leaves Ranjit to himself, moving on with her life. Shabana Azmi said in an interview later that her discovery of arth in the film hollered "Anarth" to the distributers.

They wanted the film's climax to be changed. It was unlikely for a wife to turn away a husband who has come back with a running nose and a face lined with anxiety and despair! To support their judgement, in most Hindi cinema plots, extramarital affairs were tucked away gracefully as the wife would lift up the fallen. Not here. Most probably because Arth was a semi-autobiographical film on director Mahesh Bhatt and Parveen Babi's extramarital affair and he wanted to keep it real. However, what we realise in all fairness is, some marriages need not spin through seven lifetimes altogether.

When you can't give the villain a face, you're watching Masoom. An extramarital affair condenses into a one-night stand when DK meets his Bhavna. The conjugal harmony of the Malhotra household takes a twisted turn into the helpless eyes of nine-year-old Rahul.

Rahul is the face of the one-night-stand: helpless, innocent and languishing in its own identity. Indu breaks down listening to her husband's account as she recounts she was pregnant with their eldest daughter when DK had met Bhavna in Nainital. Director Shekhar Kapur ensures that we don't take sides and delicately balances the doldrums of a family at the sight of an untimely, unwelcome incident. Gulzar's music and writing opens every emotional pore and ultimately makes you surrender to the ethos of the story.

How Indu deals with DK's infidelity is the plot of the film infused with the abounding grief of the defaulter. Jugal Hansraj becomes the crease between the separate sides of a bed Shabana Azmi and Naseeruddin Shah share.

Rang Birangi (1983): An extramarital affair with a repeat value

Deven Varma aka Ravi Kapoor inspired by BR Chopra's Pati Patni our Woh sets out to bring back the spark in the lives of Ajay and Nirmala married for seven years.

Well in line with the 1980s husband making the best of both worlds, the filmmaker forms the epicentre of this hilarious comedy.

With beautiful trophy wives decorating their households and social image they would look for opportunities to sneak an affair or two. In case they weren't looking, a playful friend like Deven Verma could tweak up their spirit diverting their attention to young, delicate looking secretaries. Deepti Naval is amusing as Amol Palekar's doe-eyed, witty colleague who enjoys an occasional "chai" with her boss.

The sutradhaar entangles the plot with ample help from the characters' idiocy with Inspector Dhurandhar Bhatawdekar channeling it towards an ultimate chaos. Towards the climax, all is well as it ends well. Hrishikesh Mukherji picks up from where BR Chopra had left the baton and competently handles writer Kamaleshwar's script within a script.

In the past eight films, we analysed all kinds of extramarital affairs with the common denominator of a man as the culprit. In RK Nayyar's Qatl, Sarika as Rohini takes upon herself to change the pattern. A struggling theatre-actor saved from an accident by her director-husband, she volunteers to stall her career and take care of the now-blind Rakesh (Sanjeev Kumar). During one of her fiery interactions with her lover Ranjeet, she clarifies that she would never leave the man who married her, made her a heroine and lost eyesight to save her. Instead, she would continue with her sexual escapades guised in theatre rehearsals. 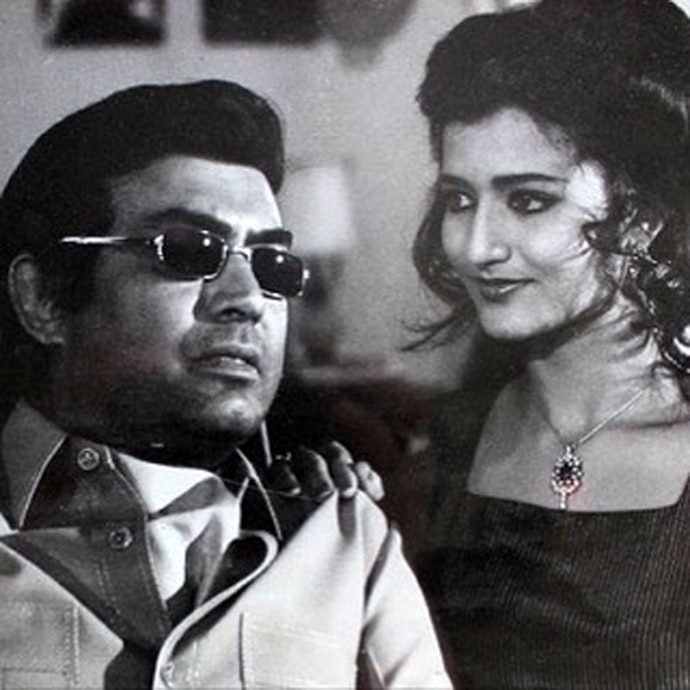 Qatl was a highly-commercial Bollywood film with stalk background score, theatrical performances and saturated frames. It has a whiff of the Surendra Mohan Pathak and Ved Prakash Sharma school of thrillers replete with jealousy, lust and romance.

An extramarital affair is a very small term configured to understand loyalty. While we - as a society - have figured an index for physical fidelity, we miss out on the emotional compatibility between a married couple. For a woman to be stark in emotion, urge, need is a palatable trait as long as it is not openly addressed and resolved.

Shrikant Pandit fails to understand the loneliness, desperation and wrench in his wife's heart. It reminds us of Charulata, our favourite lonely wife. 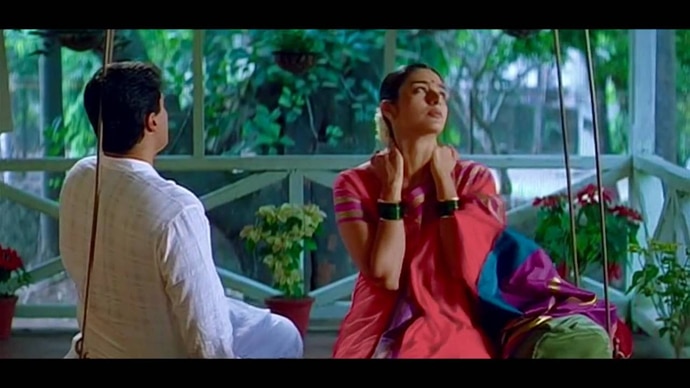 Taking a step beyond the sanctity of a marriage is a fallacy, but for the man and the woman alike. More so, Aditi is plagued by the guilt of dishonesty from the very beginning coupled with her concern, for director Mahesh Manjrekar rips apart the very social fabric that sifts a married woman's character.

As much as Aditi is a docile, adjusting, even submissive character, when rationale hits her, recovery picks up speed. She can now probe her almost sightless commitment towards her husband and family and emerges out realising her Astitva. Writers Mahesh Manjrekar and Imtiaz Hussain bore a drill into the socially-handicapped concept of marriage in an urban setting of the year 2000.

(Baaton Baaton Mein is Naireeta Dasgupta's maiden project with Gaurav Dwivedi, an FTII alumni. It is a series on yesteryear's Bollywood, trivia and music.)

#Guru Dutt, #Guide, #Bollywood, #Extramarital affairs
The views and opinions expressed in this article are those of the authors and do not necessarily reflect the official policy or position of DailyO.in or the India Today Group. The writers are solely responsible for any claims arising out of the contents of this article.