The Bronze Lining: Does Hrithik Roshan's make-up in Super 30 stand out because of our inability to see him in non-glamorous roles?

Apart from the makers’ ambitious plans to make a 5’ 11” Greek God look like a 5’6” common Indian man, we, the audience can obviously only picture Hrithik as a suave, stylish man.

At the onset, let me just lay it out here that Pankaj Tripathi would have been a far better choice for the role of Anand Kumar, in Hrithik Roshan’s recently released, Super 30. And this not because Tripathi looks the part, it is because he could act the part. Something, I felt, Roshan failed at.

Cinema is nothing on its own, if not with the support of various other elements, coming together. Imagine what a film would be like if it didn’t have a good script — all right, Hindi films are notorious for unceremoniously overlooking this aspect, but you know what it does in essence, right? Music is another such element. As are cinematography, photography and editing.

Each forms an integral cog in the wheel, for the film to ultimately work.

Where does that leave aesthetics or make-up design and hairstyling? 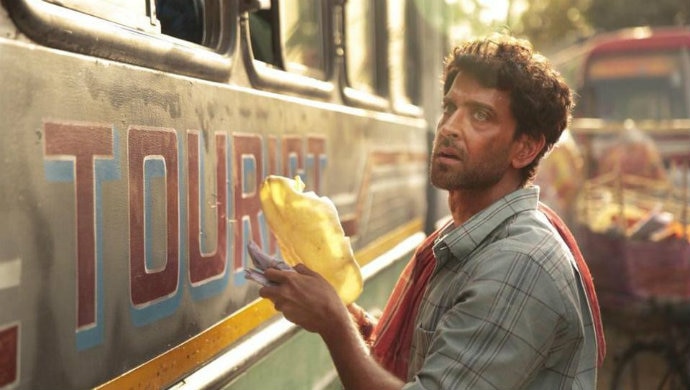 If looks could kill: Are we, as an audience, unable to separate Hrithik the actor from his gorgeous looks? (Photo: YouTube screengrab)

The biggest criticism Roshan’s Super 30 had to brave was over his unusually browned skin, which, for some was a classic example of poverty appropriation. A similar argument was made against Ranveer Singh’s Gully Boy, calling Zoya Akhtar out on her supposed elitism. Why are fair-skinned actors made to wear bronzer in order to look, say ‘poor’ or economically and socially backward? What I fail to understand is how is this even coming up in the context of cinema?

I could remind you of how supposedly dark-skinned women have been made to look fairer to fit warped beauty standards in Bollywood. Kajol and the more recent, Bipasha Basu or Deepika Padukone have had to cake up to look like quintessential Hindi film heroines. But the truth is, it wasn’t okay to make Kajol or Bipasha or Deepika look fairer than they are as a direct proportion to beauty, unless and until the role demands it. Looking the part: it all ultimately comes down to the role, and nothing else matters. (Photo: YouTube screengrab)

Like in the case of Ben Kinsley’s portrayal of Mahatma Gandhi. Technicians and artistes worked on his skin colour, as much as they did on his body language and accent to make him look the part — the part here is of utmost importance. Everything else has to work in sync and fall in line to make that part shine through. Add to that flawless acting that the man put in himself and you have a final product like Gandhi.

Apparently, 'we now know better' and therefore, we shouldn't repeat the mistakes we made in the past. The casting of an actor like Dev Patel in films like Slumdog Millionaire or Lion, apparently is proof of the West's self-awareness, something that Bollywood still lacks. And we do, in fact, have dark-skinned actors at our disposal — Vicky Kaushal, Nawazuddin Siddique, Rajkummar Rao, so why Hrithik Roshan?

Because boxing actors on the basis of their skin colour, and not on their acting ability, as long as your intentions are good, is not inappropriate, right? Right. Black and White: Let's not forget an actor's only credential is their acting ability, irrespective of their skin tone. (Photo: IndiaToday.in)

Now, back to where it all started: Super 30. To be honest, the only thing that worked against Roshan and the film — apart from the makers’ ambitious plans to make a 5’ 11” Greek God look like a 5’6” common Indian man — was the audiences’ inability to accept this light-eyed embodiment of gorgeousness in any role that’s not stylish.

We're stuck thinking of Hrithik Roshan, the Greek God, as the man with rubber-like muscles, abs that could cut steel and a jawline that makes you go weak in the knees. With such perfect looks, he ought to be a Raichand, like in Kabhi Khushi Kabhie Gham or a superhero, like in Krrish. Even as a thief, he's suave, stylish and gorgeous, like in Dhoom 2. Or better still, he's just a Mughal Emperor like in Jodha Akbar.

No, the make-up was not what went wrong in Super 30. For if that were true, Pankaj Tripathi's unibrow was as redundant and out of place as Roshan's bronzer.

Ironically, Roshan did wear a ton of bronzer in Dhoom 2 too — remember the Dhoom Again song?

Post your comment
#Elitism, #Racist, #Nawazuddin Siddiqui, #Anand Kumar
The views and opinions expressed in this article are those of the authors and do not necessarily reflect the official policy or position of DailyO.in or the India Today Group. The writers are solely responsible for any claims arising out of the contents of this article.