It discusses how India whittled down the Pakistani military, but could not destroy it.

On the usual weekend visit to the farm, I am reading, or rather re-reading late Lt Gen Harbakhsh Singh's War Despatches, his brilliantly detailed, honest and autobiographical history of the 1965 war.

Since both sides are commemorating their "victory" on the 50th anniversary of what I call the "War of Mutual Incompetence", this book is instructive.

As Western Army Commander - there was no Northern or South Western Command then, Gen Harbakhsh commanded almost the entire war from the Indian side.

Sadly today, if he wrote this book, he will be called anti-national or unpatriotic. But he is among the finest generals India has produced.

I am posting two passages to show his brutal honesty: Jacket of the book published by Lancer; not easily available at bookshops now. 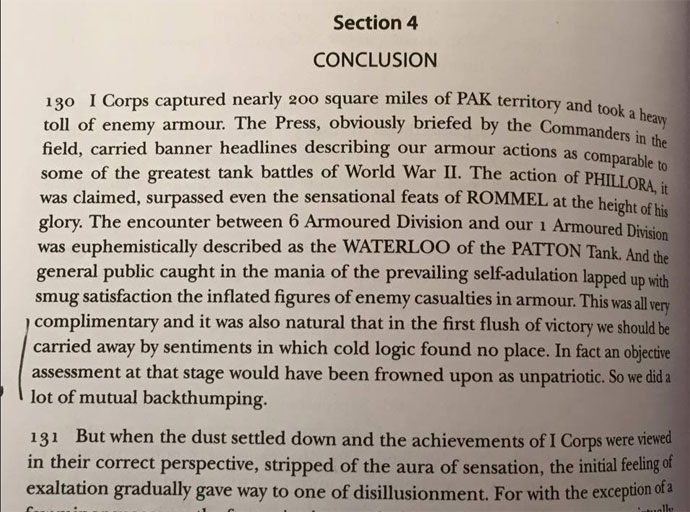 Harbakhsh's honest conclusion (in image above) on the 1 Corps, which was India's main strike force spearheaded by the 1 Armoured Division in Sialkot sector. And the Battle of Phillora, which was compared with El Alamein.

Read his line on the exaggerations of war and the convenient, mutual back-thumping. He thinks any honest assessment at that stage would have been frowned upon as unpatriotic. He goes so far as to say that an objective assessment would have replaced euphoria with disillusionment.

And remember, he is the man who had led the war. But he was a soldier, not a propagandist: a tough, fighting general; no backroom Goebbles. A page (in image above) from his "balance sheet". It discusses how India whittled down the Pakistani military, but could not destroy it, how the famous Pakistani tank forces were mauled, but not crippled, and how we suffered such a high proportion of casualties among young officers, who carried the day for India in that war. However, an "enormous void was created in junior leadership".

Find the book and read it given that propagandists have decided to rewrite history to claim a victory retrospectively. Read his account of the "near-thing" with Pakistan's audacious "thrust to Beas" through Khem Karan, and the brilliant defence by 4 Mountain Division and its hastily assembled tank and artillery force in the Battle of Assal Uttar.

Fifty years after an indecisive 22-day war, we can afford to take an honest look at it.

#War despatches, #1965 war, #India-Pakistan war
The views and opinions expressed in this article are those of the authors and do not necessarily reflect the official policy or position of DailyO.in or the India Today Group. The writers are solely responsible for any claims arising out of the contents of this article.