[Book extract] 'The Ocean of Churn' is a journey along the busy maritime trading route, its geopolitics, genetic churns and great discoveries.

A small group of modern humans made it out of Africa about 65,000 years ago and around 45,000 years ago they reached Australia, on the other side of the Indian Ocean. A substantial population remained in the Persian Gulf–north India continuum and one by one other groups migrated out.

Some 40,000 years ago, another group made its way across India to South East Asia. We cannot be sure but 42,000-year-old stone tools found recently in Purulia, in the Indian state of West Bengal, may be the remains of this migration.

When these people finally arrived in South East Asia, they would have found a terrain quite different from what we see today. As already mentioned, the sea level was a lot lower and the coastlines much further out. Islands like Sumatra, Java and Borneo were joined to the Asian mainland as part of a land mass called Sundaland. The new group, however, seems to have taken a more northward route than the Melanesians and settled in what is now Laos, Thailand, Vietnam, parts of southern China and probably extended out to adjoining areas that are now under water.

A recent study by a consortium of geneticists argues that this group of hunter–gatherers, usually associated with Y-chromosome haplogroup O-M175, became the ancestors of most people who today live in East and South East Asia including the Chinese, Japanese, Vietnamese, Thai, Tibetan, Burmese, Malay, Filipino and most Indonesians. The Polynesians scattered across the Pacific are also derived from this group, as are a number of tribes who live in eastern India. At this stage, however, we are still dealing with small bands of closely related people. We will later see how subgroups descended from this migration would colonise the eastern Indian Ocean rim and even make their way to Madagascar.

Meanwhile, new groups continued to be pumped out by the Persian Gulf–north India area. Some headed into Europe, some decided to brave the freezing Siberian cold and a few even headed back to Africa. One specific group headed out around 30–35,000 years ago and settled in southern India. Not only was the coastline further out but Sri Lanka was then attached to India and there was a large area of dry land off the coast of present-day Tamil Nadu.

In fact, as the planet drifted into a new Ice Age, the new migrants would have witnessed a further expansion of land area as sea levels kept falling. This group would evolve into what geneticists call "Ancestral South Indians", which is one of the two main founder populations from which most Indians derive their ancestry. Another group would make its way to the Andaman and Nicobar Islands (the ancestors of the Onge).

One should not be under the impression that the population ranging from the Middle East to northwestern India was static except for the occasional outward migration. This population too was undergoing constant mutations and churn. Just as an illustration, take the male lineage known by geneticists as R1. This lineage emerged somewhere in the Persian Gulf–north India continuum, possibly Iran, before the last Ice Age.

At some point, around 25,000 years ago, it gave rise to a western branch, R1b, and an eastern branch, R1a. The former would eventually find its way to Western Europe where R1b is today the most common lineage. In contrast, R1a (particularly a subgroup, R1a1a) would later become an important component of the genetic cocktail that scientists call the "Ancestral North Indians" who are the second of the two major founder populations from whom most Indians have descended.

The Indian reader may be tempted here to think of the Ancestral South Indians (ASI) as the Dravidians and the Ancestral North Indians (ANI) as the Aryans. While I have nothing against the words themselves, one should be cautious about using the terms as they are often used in the context of bogus nineteenth-century racial theories. The ANI and ASI are just different genetic cocktails and not ‘pure’ races. Moreover, we are dealing here with Stone Age bands and not horse-drawn chariots, cities and iron weapons that were said to be part of the Aryan–Dravidian rivalry.

This is a very simplified and stylised account of how the Indian Ocean rim was populated by modern humans. In reality, there would have been back-and-forth movements, dead ends and near extinctions. Also note that the genetic and archaeological evidence is still flowing in and the narrative is not set in stone, but the new information fits together much better than unreliable theories based on linguistics.

A further word of caution is warranted here. We are still dealing with tiny bands of Stone Age hunter–gatherers. A number of factors decided who died out and who survived and flourished — availability of food, changing climate, disease, tribal wars, the decisions of leaders and pure chance. A small difference in circumstances at this stage would show up as a big difference in the population distributions of later times. This is why anyone using the genetic data on early humans to support grand theories of racial and cultural superiority is missing the point. 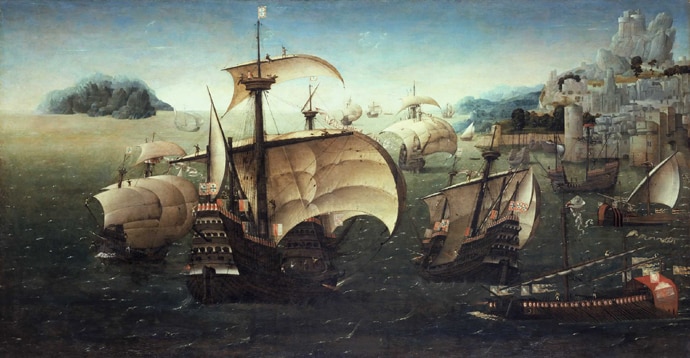 A Portuguese carrack, Santa Catarina do Monte Sinai, off a rocky coast on the Indian Ocean. [Source: Wikimedia]

The Age of Ice

Most traditional accounts about the emergence of civilization roughly run along the following script. Farming is "discovered" somewhere in the Middle East and then spreads quickly, often with the help of Neolithic migrants who awe the locals with this new technology. Overwhelmed by the awesomeness of agriculture, hunter–gatherers leave their traditional life in droves and take to cultivating wheat and barley. This switch to farming is seen to imply large improvements in the quality of life and consequently, steady increases in population. At some point, it gets crowded enough to allow the building of cities and the emergence of civilisation.

Wonderful story, but it is mostly untrue.

The last major Ice Age is key to understanding the sequence of events. The cycle of cooling started about 30,000 years ago and temperatures kept falling till the Ice Age peaked about 18-20,000 years ago. At the glacial maximum, one third of the Earth’s land surface was covered in ice (compared to less than an eighth today) and half of the oceanic surface. With so much water locked up in ice, sea levels dropped dramatically from 50 m below present-day levels 30,000 years ago to around 130 m below at the peak.

Falling sea levels, in turn, exposed large tracts of land. In South East Asia, Sundaland took over most of what is now the Gulf of Thailand and extended far into the South China Sea. The Ancestral South Indians would have witnessed very large tracts being opened up along the Indian coast, especially to the south-east. The Ancestral North Indians, who were newly coalescing into an identifiablegroup, would have been able to walk more than 150 kms out from today’s Gujarat coast.

The retreat of the sea, however, did not make life easier for our ancestors. Many places had become just too cold but, even in warmer latitudes, climate became a lot drier and many rivers and lakes dried up. Central Asia became a very cold, dry desert that could support few animals or humans. Further south, the monsoons were still active but much weaker than today.

The Himalayas were covered in glaciers and north-western areas of the Indian subcontinent may have been steppe-like temperate grasslands. We have evidence that even places like Bengal were relatively dry at the peak of the Ice Age. In Africa, the Sahara expanded by around 500 kms along its southern edge while Lake Victoria almost entirely dried up. At its peak, the sands of the Kalahari desert extended almost to the plains of the Zaire River in central Africa.

As one can imagine, the sharp increase in aridity caused a great deal of turmoil. In many places, people were forced to abandon old hunting grounds and move closer to the remaining rivers. The Sahara savannah had so far supported a significant population but desertification forced many to shift to the Nile. Note that the arid conditions meant that the Nile was not the broad river of earlier and later times but a modest tangle of braided channels that may not have even reached the Mediterranean.

Surrounded by desert, the people settling along the Nile "oasis" became increasingly sedentary. The "oasis" ran from Sudan to Cairo, around 800kms, but was no more than a few kilometres wide. We have evidence that human population steadily increased over time, probably through a combination of local births and further inward migration. This must have increased the pressures on the system and we even have the earliest evidence of a battle between two groups.

Given the growing pressure, around 15,000 years ago, we can see signs of organized food production in the Nile floodplain — not quite farms but the active management of a semi-wild ecosystem, distinct from being a nomadic hunter-gatherer. The evidence suggests that Nile people harvested catfish and tubers of wild nutgrass.

People in other parts of the world would have gone through a very similar experience and may have also attempted some form of farming. Researchers have recently uncovered the remains of a 23,000-year-old farming settlement near the Sea of Galilee in Israel.

It appears that farming is a lot older than the traditional view that it was a Neolithic invention. It is more than likely that the Indian Ocean rim also had such pre-Neolithic farming communities. One may be tempted to think that Egyptian civilisation evolved directly from the Nile oasis people, but the actual course of events is much more complicated. After the glacial peak 18,000 years ago, the world began to warm up again. Rising sea levels began to inundate the coastlines while increased rainfall revived previously arid areas. By 12,500 years ago, Lake Victoria was full and the Sahara was again an inhabitable savannah.

The combination of melting ice and increased rain also fed the rivers. On one hand, the return of a strongly flowing Nile may have washed away the carefully tended ecosystem of the "oasis" phase but, on the other hand, the Sahara beckoned. Thus, the world’s first "farmers" drifted back to being hunter–gatherers! This is why we find cave paintings of savannah animals in the middle of the Sahara at locations that would appear uninhabitable today.

The Indian Ocean rim also went through a similar shift. The coasts of Sundaland and India were flooded and seawater began to encroach into the Persian Gulf by 12,500 years ago. However, at the same time, previously arid areas became much wetter and more habitable. As with the Sahara, the desert zone that extends across Arabia into western India also became much more humid and capable of supporting hunter–gatherers. The northern latitudes also became much warmer as the glaciers retreated even as the monsoons became stronger in southern Asia. The combination of flooding coastlines and a warmer, wetter land mass led to a great deal of human migration into areas that had been previously uninhabitable. 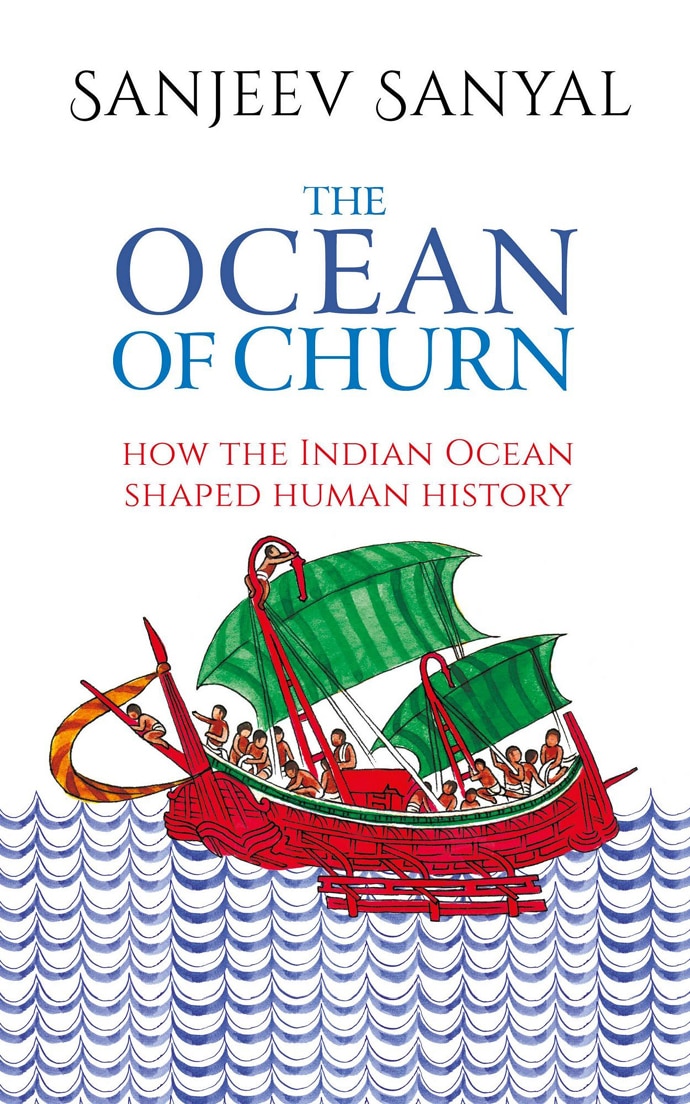 #Genetics, #Indus Valley Civilisation, #Indian History, #Indian Ocean
The views and opinions expressed in this article are those of the authors and do not necessarily reflect the official policy or position of DailyO.in or the India Today Group. The writers are solely responsible for any claims arising out of the contents of this article.

Sanjeev Sanyal is a best-selling writer, economist and urban theorist.