John Lang: The lawyer who defeated the East India Company

Lang, one can safely say was an anti-colonialist, with his constant lampoons directed against the East India Company.

Or lying in the cold,

Find their own time,

Little did I know when I started my research about John Lang seven years ago, that he will re-enter language the way he did in the mid-19th century, when he was a well-known writer and public figure. If I am allowed a pun, the ghost of Lang has found its Lang-u-age, with none other than Prime Minister Modi endorsing him as the first cultural ambassador of Australia to India. For readers who may have missed the context, our PM gifted his Australian counterpart Mr Tony Abbott with documents pertaining to John Lang at Melbourne, and tweeted about it too.

I was on some other hunt, the hunt for Alice Richman, a South Australian who lies buried in Pune University lawns. Her grave is intriguing, and it led me to look at what other Australians were doing in India in the 19th century, when I stumbled upon John Lang, and knew that it was my calling. For the next seven years, Lang would become both passion and obsession with me. In 2007, when I began this search, Lang was almost entirely forgotten to history with only a few Australian enthusiasts trying to look at him, though largely from an Australian perspective.

An illustration by John Lang.

John Lang (1816-64) was a writer, lawyer and journalist who lived most of his adult life in India, which is 1842 till his death in 1864. Arguably the first Australian-born novelist, Lang was born in Sydney where he excelled in Latin in his school days. He went to study law in England at Middle Temple, broke his leg there, married a friend's sister Elizabeth at whose place he was convalescing, and went back to Sydney. Lang was what Australians call "larrikin"- a term difficult to translate into English itself - which has connotations of outlandish and comical behaviour. He also was used to, what Mr Victor Crittenden, an octogenarian Lang enthusiast, calls "Botany Bay tricks". Botany Bay is where Captain Cook landed in 1770, and where the First Fleet that would establish the Australian colony, landed in 1788. Owing to his Botany Bay tricks, Lang had once been expelled from his law school; and owing to the same, his law practice in Sydney was not going great. He was advised to go to India where his brother-in-law Mr Peterson was an established lawyer at Calcutta. So Lang arrived aboard the ship Nabob in Calcutta, in 1842 with his wife and two children. The rest, as the cliché goes, is history. An illustration by John Lang of himself with Nana Sahib.

Calcutta somehow did not suit the taste buds of Lang, and he moved up North to "Umballa", Meerut and Agra. At Meerut, Lang would start a newspaper called "The Mofussilite." Mofussilite, or small towner, was not just the name of the newspaper, but Lang's identity as well. He would often use "Mofussilite" as his pseudonym, and self-fashioned himself a small-towner, building things for himself rather than aligning with powers of the East India Company. In fact, Lang, one can safely say was an anti-colonialist, with his constant lampoons, sometimes even harpoons directed against the East India Company. 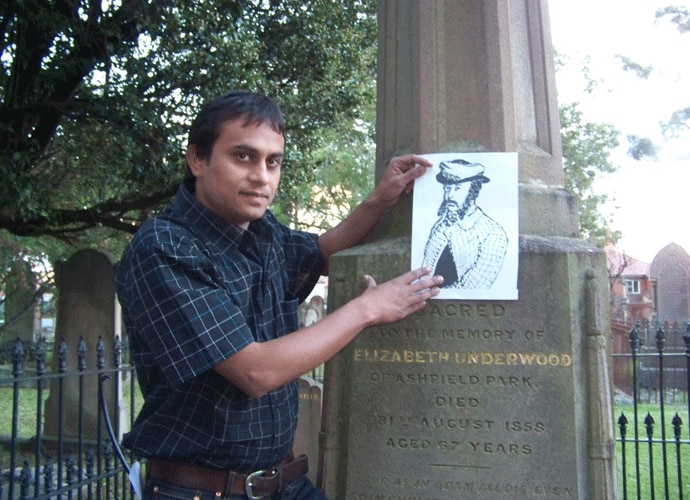 Lang was known to Indian historians till mid-20th century for his role as the lawyer of Rani of Jhansi, and only for that. They knew him as British rather than Australian, and generally quoted from the few pages that he had written about the Rani, because that's the only first-person account by a white writer about the Rani. Lang bagged this coveted project with Rani Lakshmibai, because he had fought the case of one Lala Jotee Persaud, who had supplied provisions to the John Company, as East India Company was known then, in the Anglo-Sikh Wars. The Company, instead of paying him up, trumped up charges of forgery against him, and it is then that the contractor employed Lang for his case. Lang may or not have come from England to fight his case, as the claims stand, but he did fight the case and won it for his client in 1851. He earned around fifty lakh for his client and a handsome sum for himself.  He became the lawyer who had defeated the mighty Company, and a hero with the Indians. The Rani summoned him, which was a mistake on her part, and this fact has gone unacknowledged by all historians. The British had already jailed him by suing him for libel in the same Jotee Persaud case, and were determined to humiliate him. So his petition on the behalf of the great queen was quickly dismissed.

Lang's newspaper ran very smoothly for 20 years till he lived, and went into a decline after that. He wrote twenty five odd novels, many of them set in India, a lot of poetry, and some plays.

He is buried at Camel's Back Cemetery in Mussoorie. And Lang, as the title suggests, is back from Camel's Back.

Post your comment
#Modi in Australia, #Tony Abbott, #Narendra Modi, #John Lang
The views and opinions expressed in this article are those of the authors and do not necessarily reflect the official policy or position of DailyO.in or the India Today Group. The writers are solely responsible for any claims arising out of the contents of this article.

Dr Amit Ranjan has a PhD from JNU about John Lang. His book about Lang is going to be published soon