Kahaani 2: In praise of the single woman

Vidya Balan's Durga Rani Singh is a welcome addition to the increasingly visible pantheon of women who just won’t stay quiet in Bollywood.

A woman sits behind a counter in a school, accepting fees, giving calendars, observing students and teachers walking up and down the corridor to the principal’s office. She goes home, examines an empty fridge, and hastily makes her dinner — two slices of bread and a cheese slice. She walks home every day with her publisher friend but never invites him home.

Unremarkable in every way, she is lit by a fire as it were when she sees what is a clear injustice being done to a little girl in school. She makes it her mission to save her, going to any lengths to protect her. It is no accident that her name is Durga. Durga Rani Singh.

Bollywood rarely contemplates the solitary woman. Of late though an effort is being made to see the single woman not as the happy-sad spinster of Dilwale Dulhaniya Le Jayenge or Delhi 6 but as one capable of working, living and enjoying herself without a mother/father or husband/boyfriend to give her identity and agency.

Hence Dear Zindagi, where a young woman finds herself — the men she dates in the process of arriving at that point are incidental not primary to the plot. So also Pink, where for the first time perhaps in recent movies we saw the solidarity of single working women on full display. Three women, all from different cities, live and work in Delhi, eat dinner together, occasionally party together and finally stand together. 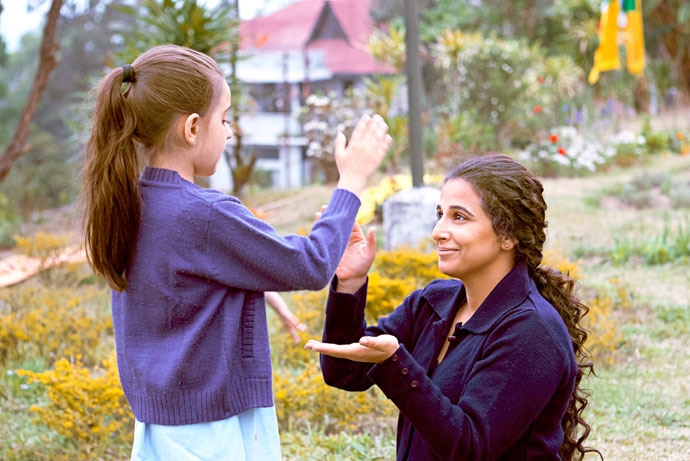 Vidya Balan and Naisha Khanna in a still from Kahaani 2. (Photo credit: Google)

So it is particularly delightful to watch Vidya Balan at work in Kahaani 2 as Durga Rani Singh. As a single woman in small town Kalimpong and then a harried mother to a paralysed 14-year-old girl in even smaller town Chandan Nagar (the size of a football field says one police officer dismissively), Balan is in fine form. Completely without vanity and devoid of the self-consciousness that strikes most female actors in Bollywood, she goes about the film determinedly.

Her life revolves around her paralysed daughter and in ensuring she gets the best medical care. And then one day, her phone packs up on her, the alarm doesn’t ring, she is late to work, the carer comes late, and well when she returns home to Chandan Nagar (with a packet of mishti along the way), well things start to go wrong.

Sujoy Ghosh has the wonderful ability to bring both strong women and Kolkata/Bengal to life. The batik kaftan, the dressing table drawer with her undergarments and the packet of sanitary napkins, the daughter’s expensive smartphone contrasting with the mother’s battered old Nokia, the harried phone calls, the useful numbers pinned on the board, the helpful old neighbour she gives a key to.

The film is studded with characters — the grandmother, the policewoman, the small town policeman with a young family (Arjun Rampal, who seems a little too posh for the role) and the sweet-faced uncle (Jugal Hansraj).

But the film belongs to the kahaani and to Durga Rani Singh, a welcome addition to the increasingly visible pantheon of women who just won’t stay quiet in Bollywood. Who demand that their stories be heard. Who insist they are shown for what they are. And thank God — er Goddess - for that.

Post your comment
#Bollywood, #Single women, #Vidya Balan, #Kahaani 2
The views and opinions expressed in this article are those of the authors and do not necessarily reflect the official policy or position of DailyO.in or the India Today Group. The writers are solely responsible for any claims arising out of the contents of this article.