If Kangana is a witch, so are all strong and fearless women

Shekhar Suman once said he hoped to stay under my spell, but I do wish he would talk to his son.

If Kangana is a witch, and deserves to be burnt at the stakes as some ignorant twit has said, then some magic must also be working for her. Is it through me? Or is it black magic?

I go back to the year 2001. Winter I think it was. At that time, there was a popular television show called Movers and Shakers, hosted by the very charming Shekhar Suman, Adhyayan’s father. He was very keen that I, Ipsita Roy Chakraverti, India’s first witch, should be in exclusive conversation with him. And so I was. On parting, he wanted to have a picture taken and wrote some very prophetic lines:

“Dear Ipsita, I hope to stay under your spell forever. Thanks for coming. Love, Shekhar.” 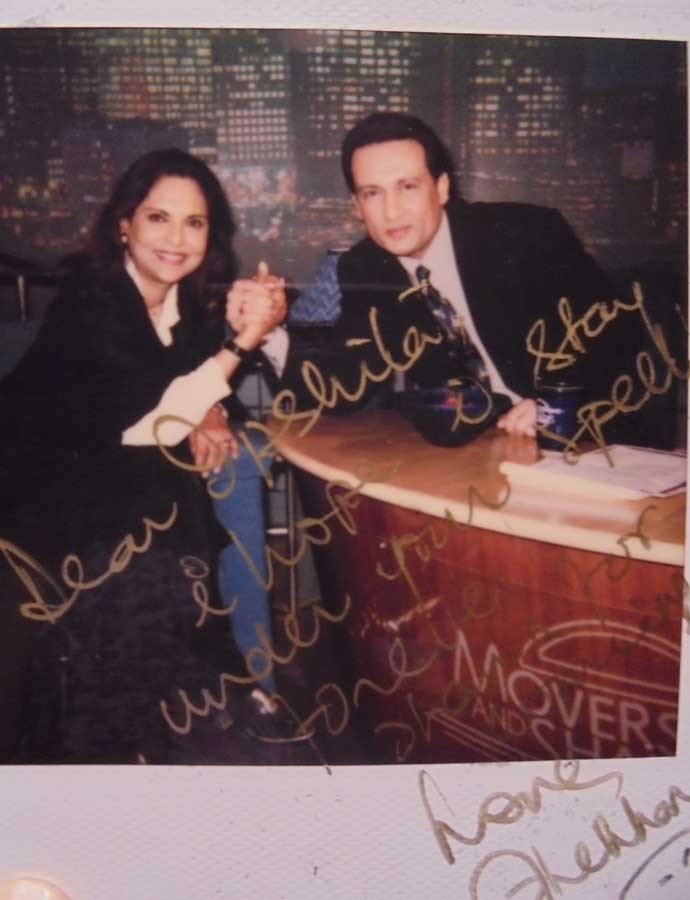 Shekhar Suman with the author.

Now, if I wanted to at this point of time, I could have said like father, like son. But I’m a Wiccan and dignity means a lot to me. I do not squabble in the marketplace. And quite frankly, I found Shekhar to be a very decent gentleman at that time.

It shocks me to read of what he, his wife and son are saying at the moment about a woman who does not deserve to be maligned. Of course as far as I’m concerned, being called a daayan or a witch is a compliment.

It shows that you are not part of a herd of cattle or sheep. You have a mind of your own. You are strong and you are fearless. I think Kangana is proving herself to be all of this.

At one time, Wicca was a worldwide phenomenon embracing our old world cultures of Egypt, Britain, France, Romania, Greece and India. In fact, it is believed that the word daayan was imported to India from Greece, whose people worshipped the witch goddess Diana. Something so positive and beautiful turned into a negative meaning in our country.

It does not speak well of our patriarchal society.

Between the eleventh and seventeenth centuries in Europe itself, about 8 million women were burnt at the stake for being witches. It was a gender issue and organised religion coming down on a strong woman.

Whenever anything went wrong in society, be it a war lost, or a disease like the plague which swept the country as in Britain, somebody had to be made a scapegoat. And at that time it was the “witch”.

In today’s India, we worship the goddess but we abuse the woman because we need something or somebody to trample on and to take out our own individual frustrations on. In the home it is the meek wife or daughter in law. A woman in this case may tolerate it all because marriage is so “compulsory” in our society. An unmarried daughter is still considered to be a burden. A mama’s boy is more welcome. In the office, a woman subordinate often faces the brunt of the boss’s ire - or his advances. And she has to keep silent. In the village it might be a woman alone whose property is targeted by the village goons. If she does not hand over what they want, she is a daayan and stripped and killed. Many are such cases which I have seen with shock and dismay. Mere reporting to the police is not enough.

And often unfortunately a woman falls prey to a boyfriend who is unsuccessful in his own career, jealous of her, and pampered and encouraged by parents who are a bit too fond.

I do wish Suman would talk to his son and try to bring him to his senses. But then, first of all, our society must grow up.

In the meantime, Kangana can always go to the chairperson of the National Women’s Commission for redress. After all, that is where I appealed and got things settled when Ekta Kapoor tried to make money by projecting women as bizarre daayans. She hates me for this to this day because the Commission called her to Delhi and she had to make cuts and snips which ruined the film and made it even more ridiculous than it was.

#Bollywood, #Witchcraft, #Adhyayan Suman, #Kangana Ranaut
The views and opinions expressed in this article are those of the authors and do not necessarily reflect the official policy or position of DailyO.in or the India Today Group. The writers are solely responsible for any claims arising out of the contents of this article.

Wiccan priestess and a writer.