What is it about the Indian Army that it produces musical gems for the Mumbai film industry such as Madan Mohan and Anand Bakshi - both weaving their musical and lyrical magic in heaven now? And Khayyam, who turned 90 last Saturday, February 18.

Khayyam joined the Army during World War II and worked there for three years. He was a member of the army cultural troupe (headed by Fail Ahmad Faiz) performing plays and songs to persuade people to join the force. But that’s not his claim to fame!

I first heard of Khayyam not because of his musical genius but because of his wife Jagjit Kaur, a singer of memorable masterpieces. She along with her wealthy zamindar family used to be a neighbour of my grandfather’s in Civil Lines, Hoshiarpur.

Both families knew each other well. During our vacations to Hoshiarpur every summer in the 60s, her family’s name would invariably turn up in conversations. By that time, Jagjit had already married Khayyam. Khayyam, born Mohammed Zahur "Khayyam" Hashmi, a Muslim, was from the nearby town of Rahon.

He was from a humble background. Khayyam had attended a music concert where he spotted Jagjit Kaur singing and approached her for Shola Aur Shabnam (1961). She sang solos for the movie, including a duet with Rafi.

I have been fascinated by Khayyam’s music for the past 50 years, and completely bowled over by Jagjit Kaur’s renditions - her ability to switch from a rustic voice to render folk tunes, such as Ladi Re Ladi from Shola Aur Shabnam to a soft and melodious voice as in Tum Apna Ranj-o-Gham from Shagoon.

I finally met them in their apartment in a Juhu housing colony some years back. The flat was modestly appointed. Jagjit Kaur met me very warmly and enquired about my larger family. Khayyam was initially reserved but opened up gradually. While discussing his music, he got emotional, his fingers painting figures in the air and his feet prancing about. It was a fabulous afternoon. 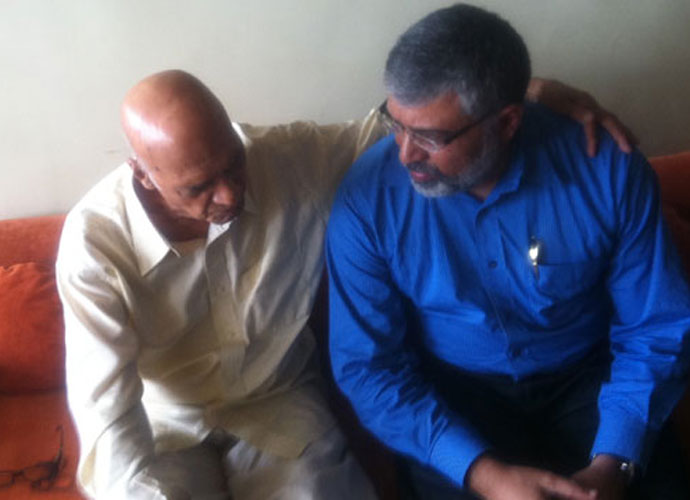 The writer with Khayyam.

Who would have ever thought that Fyodor Dostoevsky’s Crime and Punishment would provide the impetus to Khayyam’s career? Although Khayyam’s Sham-e-Gham Ki Kasam, sung by Talat Mehmood for Footpath (1953), gained immense popularity, it was only with Phir Subah Hogi (1958) that Khayyam’s genius was recognised.

Director Ramesh Saigal offered Sahir Ludhianvi the opportunity to write the lyrics for Phir Subah Hogi, which was based on Crime and Punishment. Since Raj Kapoor was the hero of the film it was natural that Shankar-Jaikishan would give the music, but Sahir suggested that he wanted someone who had read and understood the book. And that was Khayyam. Such are the twists and turns of fate with which our film industry is replete!

Khayyam had read Sahir’s anthology of poetry, Talkhiyaan, and had composed songs for the poems. Sahir by this time was an accomplished songwriter in films. He was very impressed when he heard one such composition. This is how the two developed a mutual admiration for each other. Their association is an abiding milestone in the Hindi film industry.

It was Khayyam’s dream to become a singer-actor like KL Saigal whose movies he used to watch very often. Because of his family’s opposition, he went to his uncle in Delhi. There he learnt music from Pandit Amarnath. Then he went to Lahore and became an assistant to then top music composer Baba Chisti. The Army followed.

After the war, Khayyam returned to his first love, films. Having learnt from Pandit Amarnath it was natural for him to meet his brothers in the industry - Husnlal and Bhagatram. They helped him make his debut as Sharmaji of the Sharmaji-Varmaji composer duo. Heer Ranjha (1948) was the first movie he gave music in. After his partner, Rahman Varma, moved away post-Partition, he began working solo. The film Pakeezah owes its completion to Khayyam and Jagjit Kaur.

Khayyam emphasised to me that he never compromised on perfection. For the song Jaane Kya Dhoondti Rehti Hain, Rafi had to give 21 takes before Khayyam approved it.

I asked him the secret of Asha Bhosle sounding so different in Umrao Jaan. That’s because I made her sing in a lower octave than her usual scale, he explained.  She asked for a week to prepare. On the day of the recording, she got cold feet and asked if she could sing in her own scale. They agreed that they would record in both scales and she could then select.

For Kamal Amrohi’s Razia Sultan, Khayyam went through the research made by the filmmaker for eight months before starting music composition, of which Ae Dil-e-Nadaan sung by Lata Mangeshkar captured the mood and feel of the character beautifully. Khayyam decided to give this track more than one pause, each running over five seconds, to dramatise the lyrics. This song, unknown to Khayyam, was to change his life once again.

Till this time, shockingly, he was out of the film world for a long period. From Kabhi Kabhie he staged a miraculous comeback. Khayyam narrated an interesting incident. A day after the recording of Ae Dil-e-Nadaan, when Khayyam was asleep at home the bell rang at two in the morning. Khayyam was shocked to see Jaya Bachchan and filmmaker Sultan Ahmed at the door.

Apologising for coming so late, Jaya requested for the tape of the song, saying that Amitabh Bachchan had sent her to fetch it. It wasn’t with Khayyam and Kamal Amrohi had it dropped to her house the next day. Then Yash Chopra and Sahir Ludhianvi came to Khayyam’s home and offered him Kabhi Kabhie.

Khayyam said he always preferred to work with the poets rather the regular film lyricists. That is the reason one finds poetry playing an equal role in Khayyam's compositions as the music. His music brings to life the poetry and does not overpower it. He had very high regard for Kaifi Azmi, Ali Sardar Jafri, Majrooh Sultanpuri, Sahir Ludhianvi, Naqsh Lyalpuri, Nida Fazli, Jaan Nisaar Akhtar and Ahmed Wasi. 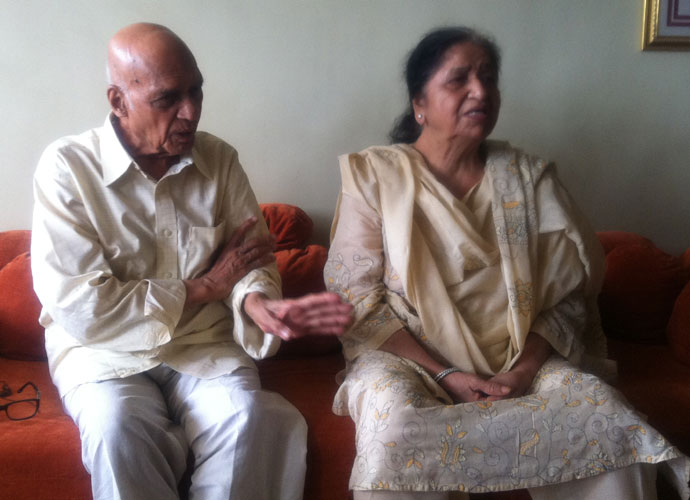 Pakeezah also owes its completion to Khayyam and Jagjit Kaur. Khayyam told me that when he was working on Shankar Hussain, he asked Kamal Amrohi to screen what he'd shot for Pakeezah. At the screening, Jagjit Kaur insisted the film was a classic which should be completed. Amrohi regretfully declined stating that Meena Kumari would not agree. It was Jagjit Kaur who persuaded the actress to agree, and Pakeezah took off.

During his inexplicably long pauses, Khayyam also provided music for ghazals, devotional songs, Sufi songs and bhajans. The most notable among this is actress Meena Kumari’s poems I write, I recite, for which Khayyam gave music and the nazms were recited by the poetess herself.

With Rafi, he recoded Shauq Har Rang. He collaborated with Asha as well. He even composed for Begum Akhtar. That speaks volumes about his range as a composer. He has also composed a few patriotic songs and 45 songs for TV shows. He got his wife to render ghazals by Meer. In all, he composed 194 non-film ghazals and songs.

In 70 years, he has composed only 327 songs for 54 films. That’s such a shame! Music directors who are not a patch on him have done much more. He did receive recognition though - three Filmfare Awards for best music in 1977 for Kabhi Kabhie and 1982 for Umrao Jaan and a Lifetime Achievement Award in 2010. He was awarded the National Film Award for best music director for Umrao Jaan in 1982 and the Sangeet Natak Akademi Award in creative music in 2008. He was awarded the third-highest civilian honour, Padma Bhushan, by the government of India in 2011.

Such classy music directors will never fade away. The discerning music lovers shall always cherish the contribution of this couple. This pyaar ka bandhan, janam ka bandhan, kabhi nahin toote ga! May God give them a long and healthy life.

#Bollywood Music, #Khayyam
The views and opinions expressed in this article are those of the authors and do not necessarily reflect the official policy or position of DailyO.in or the India Today Group. The writers are solely responsible for any claims arising out of the contents of this article.