A tribute to the king of yodeling and humorous musical battles, Kishore Kumar, on his birth anniversary

A screenwriter, lyricist, actor, producer and director wrapped into one, Kishore Kumar will go down in history as the best musical and acting talent to have ever existed.

Kishore Kumar was like nobody else — enigmatic, eccentric, matchlessly versatile, he owned one of the best voices music listeners had ever heard. When he sang, his sonorous spontaneity held everybody captive. It still does.

Also, a complete natural as an actor, Kumar, who was born Abhas Kumar Ganguly on August 4, 1929, was gifted with an amazing comic timing. Besides, he was a screenwriter, music director, lyricist, producer and a director. The man born in Khandwa in Madhya Pradesh was, in short, a multi-faceted entertainer of the kind Bollywood hadn’t seen before him.

Most of Kumar’s work can be divided into two categories: singing and acting. As a young singer, he used to idolise Kundan Lal Saigal and even emulated his style, which can be heard in his renditions of his earlier songs. Sachin Dev Burman, who is credited with the discovery of Kumar, had apparently told him that he should stop copying Saigal and find his style. Kumar drew inspiration from his idol, Kundan Lal Saigal and even tried to emulate his style. (Photo: Wikipedia)

Much of Kumar’s work happened in the golden era of film music that began in the 1950s. Among his accomplished singing counterparts was Mohammed Rafi, who was comparably versatile and well-versed in classical music. Mukesh could evoke the feeling of melancholy in lilting melodies better than anybody else. Manna Dey and Talat Mehmood were also immensely talented, whose presence helped the films of that period. 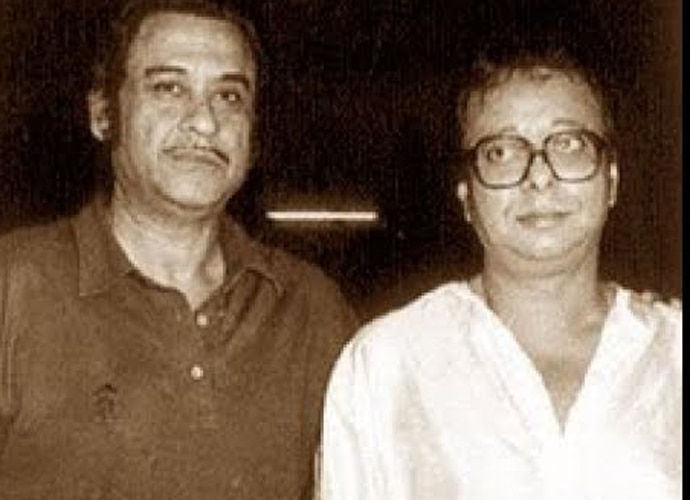 A gold mine of collaborations: From 'Ek Ladki Bheegi Bhaagi Si', to 'Chod Do Anchal', collaborations between Kumar and Burman gave us evergreen hits. (Photo: YouTube/ Anirban Paul)

Kumar’s voice was used for all kinds of songs, which is a testimony to his phenomenal range as a vocalist. If he could entice the listener with his lively rendition of 'Main Hoon Jhumroo' from Jhumroo (1961), a film he acted in, sang, wrote the story and composed music for, he was equally good while singing romantic numbers like this writer’s favourite, 'Kora Kagaz Tha Yeh Man Mera' (Aradhana, (1969), which SD Burman gave the music for).

SD Burman’s equally gifted son, composer RD Burman also enjoyed a special association with Kumar. Both the father and the son used the talent of the ‘formally untrained singer’ remarkably, and many songs thus created were destined to be enjoyed for years to come. Burman Junior recorded extensively with him, and their numerous collaborations included delightfully mellifluous songs like 'Kuch To Log Kahenge' in Amar Prem (1972) and 'O Maajhi Re' in Khushboo (1975).

'Kuch to log kahenge': The people spoke and how! Both senior and junior Burman created magic when they collaborated with Kishore Kumar. (Photo: YouTube/ Bollywood Classics)

He was the favourite voice of several music directors until he decided to retire on September 1987. His list of great songs reads like an encyclopedia of unforgettable memories. Fortunately, for us, we can revisit these songs by reaching out for recordings which have preserved them for eternity.

Kumar sang in many languages, and among his songs, were many non-film ones which he sang in his mother tongue, Bangla, which are considered to be classics. However, he is better remembered across India as an immensely talented actor in Hindi cinema, who featured in several spectacular films but was great to watch when at his best.

In Chalti Ka Naam Gaadi (1958), his home production attributed to his secretary Anoop Sharma, his character co-owns a garage belonging to three brothers, the other two played by his real-life brothers ‘Dadamoni’ Ashok Kumar and Anoop Kumar. His performance in the film was loved by the viewers, who made the film a success at the box-office. Is there anything that Kishore Kumar couldn’t do? The man was a singer, actor, producer, director, screenwriter and a lyricist. (Photo: India Today)

In Half Ticket (1962), he played a good-for-nothing son who doesn’t have adequate money for a train ticket. So, what does he do? He decides to pass off as a child to be able to travel with a half ticket! His performance in the film showed his instinctive ability to entertain the audience.

In the gut-busting comedy Padosan (1968), he is superb as a paan-chewing dramatist and musician. The film’s highlight is the comic musical battle featuring Sunil Dutt, Mehmood and Kumar in the song 'Ek Chatur Naar', which can be watched a million times just to have a great laugh. 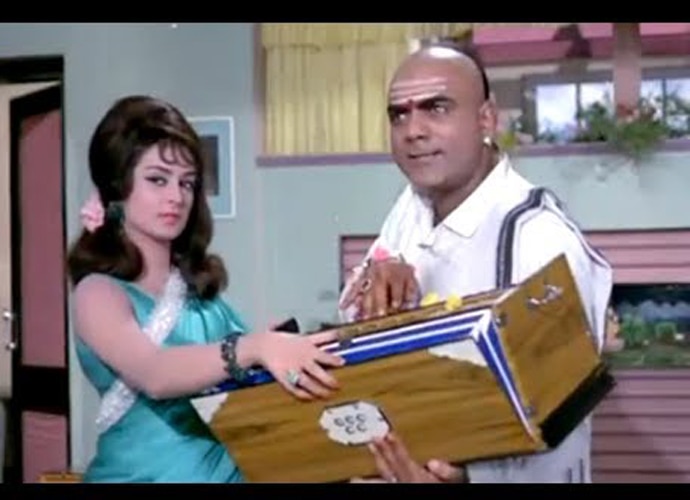 Kumar was famously moody. Stories about him suggest that he had a knack for doing the unexpected to spring surprises on unsuspecting people.

During his college days, he reportedly played the tabla on the classroom bench while classes were on. It is said he had a name for each of the trees in his garden. A signboard on the door of his Mumbai flat in Warden Road once read ‘Beware of Kishore’, while another one he is known to have put up outside his Madhya Pradesh bungalow read ‘Mental Hospital’!

Eccentricities were synonymous with Kishore Kumar. The reason why we remember him, however, is his phenomenal body of work that reveals the man’s genius.

His best films as an actor, particularly those with their share of ‘ha-ha’ moments, are thoroughly enjoyable. His songs have spawned imitators who have manufactured their careers out of mimicking his style. Artists like Kumar Sanu, Abhijeet Bhattacharya and Babul Supriyo idolised his voice and singing techniques — including yodeling — to become successful singers. Who says only country music artists can yodel? Kishore Kumar is and will always be the undisputed king of yodeling. (Photo: YouTube/ Old is Gold)

Kumar passed away on 13th October 1987. More than three decades after his death, he continues to be a widely popular singer whose songs are heard in their original and remixed versions by the modern-day music lover.

The Internet will remember Kishore Kumar on his 90th birthday today. Meanwhile, one thing is for sure. Someone, somewhere, is emulating his style to become a singer someday.

Also Read: Happy Birthday, Mumtaz! From starlet to superstar, the incredible journey of Mumu aka Mumtaz