'Dance is such a beautiful way of telling the story of people falling in love.'

Of the many wonderful aspects of Damien Chazelle’s delightful musical La La Land are its song-and-dance routines which are seamlessly woven into the narrative. Each number is gorgeous with the costume, set, camera, dance and music departments all in step with the performers themselves.  Audiences will walk away with a favourite from the many numbers but Someone In the Crowd, Another Day of Sun and A Lovely Night are likely to have an edge for they involve choreographer Mandy Moore, a two-time Emmy Award winner, pushing the dancers and two actors – Ryan Gosling and Emma Stone - put their best foot forward. What makes it more daunting, and fascinating for viewers, is that they are often required to do so in one long take.

Moore’s biggest accomplishment is that how she enhances Justin Hurwitz’s lovely score with the right accompaniment of movements. If you are blown away by the sheer daredevilry of the opening number Traffic set to the track Another Day of Sun, which is set on an LA freeway and has a massive chorus line dancing on top of cars and in the middle of the road, then Someone in the Crowd has the infectious hook that makes you want to dance in the aisle.

Beginning in an apartment where Mia’s roommates try to convince her to come to a party and ultimately moving to the said party set in a swanky house with a pool no less, it is the foot-tapping track of the film featuring dazzling jazz choreography. Linus Sandgren’s camerawork deftly captures the smooth choreographed chaos of Moore’s work in these numbers. The moment when the camera dives into the pool and just swerves around, is sheer movie magic. Needless to say the rush of movements and Sandgren’s rich visual palette is best experienced on the big screen. 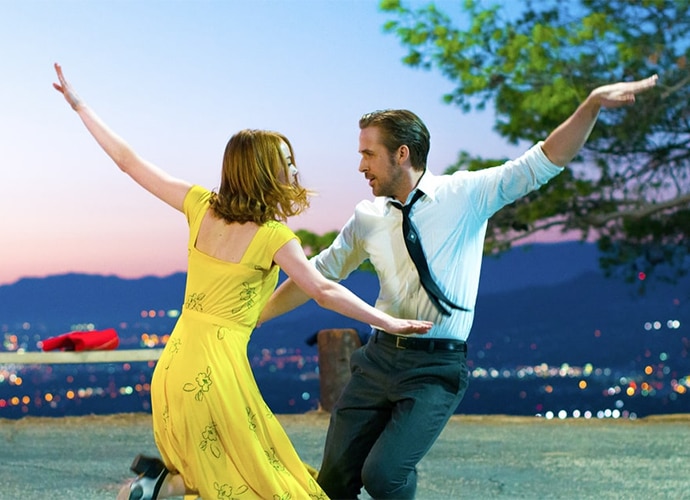 Of the many wonderful aspects of La La Land are its song-and-dance routines which are seamlessly woven into the narrative. [Photo: Screenshot/YouTube]

A Lovely Night is the number whose spontaneity and humour transports you to the era of Fred Astaire and Ginger Rogers duets. “I’m a musical theatre/MGM-style/dance-on-film nerd,” Moore says in a film note shared with the media. Yes, La La Land will make viewers refer to many terpsichorean references from cinema – from Singing in the Rain and An American in Paris to West Side Story – but the beauty of Moore’s work is that it is never short on vision, originality and most importantly emotion. “My initial conversations with Damien [Chazelle] were about how we wanted the audience to feel really emotionally invested and immersed in our numbers,” she says.

The dynamism of the movement in the first half makes way for more stillness – as evident in the waltzing on wires in the planetarium – as Mia and Sebastian gradually fall in love. “We wanted the feeling that Sebastian and Mia are real people who, just for a moment, transcend the confines of everyday life.” For Chazelle, there is no better way to express the emotions of joy and love than through song and dance.

“Dance is such a beautiful way of telling the story of people falling in love – of expressing the emotions and frisson of when you first meet someone who knocks you out,” says the 31-year-old writer-director. No wonder then dance is often the tool that enables the lovers to get lost, however briefly, in the picturesque world. The film’s emotional finale, Epilogue, is best demonstrative of that. That this world is so far away from the harsh reality and is so idyllic is why you don’t want these numbers to end and also why you will play them on loop.

Such is the lyrical beauty of La La Land that one forgets that Ryan Gosling and Emma Stone are not professionally trained dancers; even though Gosling has proven he knows how to shake a leg if you go by the cute video of 12-year-old Gosling dancing to Touch Me in silver pants. “We were creating the movements as they trained and those movements became organic to their characters,” says Moore who spent three to four months training the two leads.  Mia, an aspiring actress, and Sebastian, a devout jazz musician, are not outstanding dancers like let’s say Gene Kelley and Debbie Reynolds or Rita Moreno and George Chakiris were. That they aren’t even aspiring to be is what makes La La Land more memorable.

#Emma Stone, #Ryan Gosling, #Mandy Moore, #La La Land
The views and opinions expressed in this article are those of the authors and do not necessarily reflect the official policy or position of DailyO.in or the India Today Group. The writers are solely responsible for any claims arising out of the contents of this article.