Mohan Deora and Rachana Shah narrate the frenzy the singer generated on an international concert tour.

Mukeshji would often tell Lataji that one day he would take her to Guyana and the Caribbean islands. "Wahan ke log aapki pooja karte hain aur aapko sunne ke liye taras rahe hain." (People there worship you and long to hear you sing.)

Lataji decided to honour Mukeshji's wish. And so I got working. I made several trips to the West Indies and finally managed to schedule a concert tour in 1980. This time Nitin Mukesh would accompany Lataji.

All the arrangements were made for our arrival. We were to fly from Toronto to Trinidad. We checked in and got busy duty-free shopping. The boarding had begun and some of our team had boarded the flight, but many, including Lataji and I, failed to hear the final call and the worst happened: we missed the flight.

There was a group of us and by now we were absolutely frantic. Our bags had been checked-in and we had no clothes or personal belongings. We were stranded in Toronto. Somehow we made our way to a nearby motel where we stayed the night.

To add to our woes, the next flight to Trinidad was via New York, and as luck would have it, Lataji's American visa had expired. So, she needed a transit visa.

We made our way to the US consulate in Toronto, hoping we could persuade them to give us a visa, which was not usually an easy task. We filled out the visa application and when we were called in for the personal interview, something amazing happened. 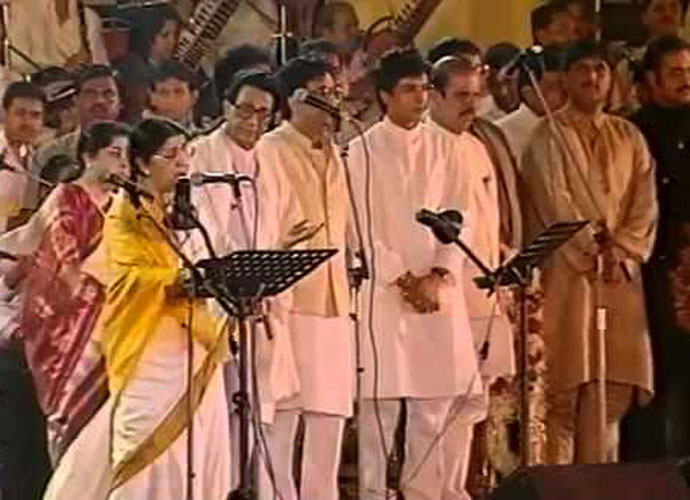 The American Consul General welcomed us into her office and greeted us with a "namaste". I have no words to describe what went through my mind. She then continued addressing me in impeccable Hindi: "Yeh Lata Mangeshkarji hain, na?" (This is LataMangeshkar, isn't she?)

I blurted out a "Yes". "Inke gaane sun kar maine Hindi sikhi hai, kya mujhe inka autograph mil sakta hai?" (I have learned Hindi by listening to her songs. Do you think she might give me an autograph?) Our next stop was Georgetown in Guyana.

The word had spread. Lata Mangeshkar was coming! The day of her arrival, 1 October, 1980, was declared a public holiday. The whole town seemed to have gathered at Georgetown's Timehri International Airport (renamed CheddiJagan International Airport). The crowds chanted, "Lataji, welcome!" She was escorted by a motorcade and news of her arrival was broadcast live over the radio.

Thousands and thousands of people lined both sides of the road. They were not only Indians, but people of all races. As her car passed, many threw flowers in her direction. People waved their hands furiously while others ran alongside the motorcade. Her fans were so eager to catch a glimpse of her that some even climbed on to tree branches to get a better view.

In an interview in the local press, Lataji said: "I have never experienced such crowds outside India. I am deeply touched by everyone who has come here to see me."

When we reached the centre of Georgetown and stopped at the St George's Cathedral, Lataji got out of the car, and the crowd surged forward to catch a glimpse of her.

An old dream was being fulfilled. The mayor of Georgetown presented her with the key to the city. In the background, a band was playing the melody, "Gumnaam hai koi".

I was not sure it was an appropriate song for the occasion, but as we went towards the car, Lataji turned to me and said: "Did you hear the band? It seems that I will have to sing that too."

(Excerpted from Mohan Deora’s and Rachana Shah’s forthcoming book on Lata Mangeshkar’s international concert tours over a period of 25 years, On Stage With Lata, edited by Nasreen Munni Kabir, to be published by HarperCollins Publishers India in January 2017.)