With Duckbill's "Talking of Muskaan", Indian young adult books step firmly out of the closet.

On the surface, Muskaan, the protagonist of Himanjali Sankar’s Talking of Muskaan, is a regular 15-year-old. The green-eyed teenager is a great swimmer and class topper. She has loads of friends and lives in a beautiful house with a garden and a tree house. Prateek, the resident stud, has a crush on her. But gradually, the reader discovers, Muskaan is different – she doesn’t want to be forced to do “what girls do” and is ragged mercilessly for this, even being dubbed "macho musko" by her own friends. When Muskaan kisses her best friend Aaliya on the lips, life, as the teenagers know it, isn’t quite the same again. Things go downhill and as is revealed at the beginning of the book, the troubled teenager, in an act of desperation, tries to commit suicide.

Published by Duckbill, Talking of Muskaan is a sensitive and brave portrayal of being a teenager in today’s confused times. It deals with sexual orientation, identity, urban angst and growing up surrounded by hyper-consumerism. But most importantly with this story, Indian YA (young adult) books have firmly stepped out of the closet, by taking on a subject that’s usually-taboo-for-the-young-ones.

Muskaan and her friends are growing up in a homogenous world, grappling with banal and ginormous issues that young readers will be familiar with – the dizzying feeling that comes with that first crush, the vacuum that’s left behind with your best friend’s silence, the horrid realisation that you don’t have enough money to buy an expensive birthday gift for a classmate, the nasty bullying in the school bus. Being a teenager is tough, and being lesbian, is even more so. Teens who are dismissed callously, bullied relentlessly and treated cruelly because they are attracted to people of the same-sex can have a tough time at school.

When Muskaan confesses to bestie Aaliya that she likes girls, she finds herself alienated. Subhojoy, who is from a different socio-economic background and is often marginalised for it, is the only one who understands. At one point, he look at Muskaan and thinks, “She talks about the world as if she is a bystander, not like she belongs to it. I also do that. Perhaps that is what makes us friends”. 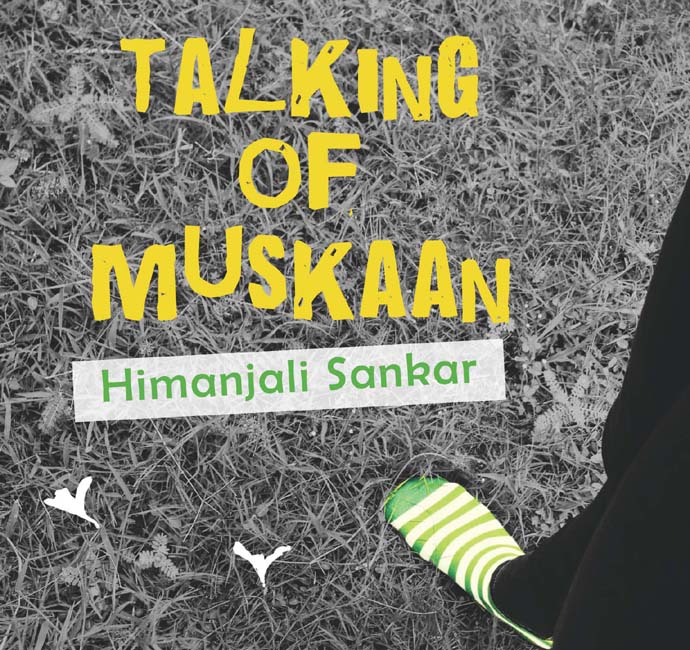 When you are 15, perception is everything and Muskaan is defined by her classmates’ opinion. Her sexual orientation eclipses everything else, almost as if she as an individual doesn’t matter. Even her story unfurls from the viewpoint of three classmates – her one time best friend Aaliya, her ally Subhojoy, and Prateek – who tell us Muskaan’s story. Prateek, for one, is full of vitriol – “Muskaan is not only homo, she’s also rude. Maybe homos are like that only”. His classmates mirror his thoughts, they speak of homosexuality in hushed tones, speculating in the school corridors, in whispers laced with ridicule and contempt. Aaliya wonders at the immaturity of her friends, while being unable to accept her own callousness towards Muskaan at the same time. She thinks, “They’d been skirting around the issue like dainty Victorian ladies, not using the word homosexual but delicately hinting at it. Which century are we living in?”

India has its share of adult LGBT writing and Talking of Muskaan now puts YA books on that literary map. Duckbill previously published Facebook Phantom, by 17-year-old Suzanne Sangi. The book was a paranormal romance, but it introduced a gay character who later on becomes straight. For Sangi, it was a way of exploring alternative sexuality and the confusion that comes with having crushes on a person of the same-sex. In contrast, Muskaan is very definitive about not being attracted to boys.

Since only a handful of Indian YA books have LGBT themes or characters, teenagers usually turn to international books to read about this topic. The internet is buzzing with listicles of the best LGBT books for younger readers. For instance, John Green and David Levithan’s Will Grayson, Will Grayson tells the story of two American boys with the same name, one straight and gay. Both authors paint the gay and straight characters deftly – they are funny, dark, confused, and quirky. Essentially, they are normal adolescents, whatever orientation they maybe. Levithan’s Two Boys Kissing is poignantly different – a group of dead gay men who succumbed to AIDS narrate the story of two boys and their attempt to create a world record for the longest 32-hour kiss. It lays bare the complexities of parental approval, peer pressure and the relief that comes when friends and families extend unconditional support.

Post your comment
#Young Adult Fiction
The views and opinions expressed in this article are those of the authors and do not necessarily reflect the official policy or position of DailyO.in or the India Today Group. The writers are solely responsible for any claims arising out of the contents of this article.