How Siva evolved over the years

In truth the divine is unknowable, and to try and find his origins is a reckless task.

In part 1 of this series on Siva we touched upon the presence and development of Rudra as he appears in texts before the beginning of the common era. In this article, I'd like to walk you through what might have been the process by which Rudra became Siva in the millennia that followed. Scholars like Nilima Chitgopekar and Benjamin Fleming have written extensively on this complex journey. Others like Stella Kramrisch have presented an ahistorical portrayal which makes it difficult to analyse the process.

Indologists agree broadly that the by the 4th century CE the epics were in the form as we know them today. In the epics Siva, though respected, was not yet a major deity. Many of the legends associated with his classic Puranic form are not fully formed. For instance, having combed references in the Mahabharata, Dr Lynn Thomas suggests that his "destroyer" aspect is yet to take exclusive hold. References to destruction, death and the end of creation are diffused and Yama continues to hold a larger share of the antaka (ender, destroyer) aspect. Other stories associated with Siva where they do appear are brief and not anywhere as developed as in the Puranas. Phyllis Granoff points to the destruction of the sacrifice of Daksa, the decapitation of Brahma and the decimation of Tripura (three cities) as scant or absent in the epics. Yet, Kalidasa who is supposed to have lived around the same time, had no trouble at all penning the mahakavya "Kumarasambhava" in which Siva appears in full Puranic glory, even though explanatory myths are not elaborated (see KS 5.65-81). Why this disconnect? Well, three basic elements underlie the transformation of Rudra to Siva, in which absolutely central is the role of theologian-redactors who decided when and in what form a deity would be placed in the brahminical texts. Other factors include the absorption of the belief systems of autochthonous groups into the Vedic fold and the inclusion of regional gods, each of whom added their features to the developing deity. This led to the re-casting of references that appear in stem form in early Vedic texts.

Some new aspects that were added to Rudra came naturally to him. For instance asceticism. Rudra/Sarva, the hunter, lived in the forest, rejected the Vedic sacrifice and way of life. He is the god mentioned in the Kesi-sukta (RV 10.136) which enunciates the earliest expression of heterodox, mendicant ways. The transformation to the Mahayogi in the wake of the systemisation of yoga (circa 6th-4th cen BCE) is then easy to comprehend. But what about other features? Here Nilima Chitgopekar's scholarship shows the way. She feels certain characteristics were grafted deliberately onto Rudra in what is now known as the Puranic Process. As the footprint of Aryavarta expanded, the Vedic religion came directly into contact (hegemonically) with other cultures, which had their own gods. These gods were not discarded or rejected, but integrated into the brahminical pantheon with their features.

As the modern states of Maharastra, Madhya Pradesh, Odisha, Andhra Pradesh and Karnataka came into the fold, local folk deities were tagged onto Rudra and their personalities coalesced into the deity we know as Siva today. Khandoba, Mailara and Mallana are examples. Mahakala was a local deity of Ujjain before he became one with Siva. Chitgopekar applies Darwin's theory to gods, saying those who were most adaptable, most able to respond to contemporary concerns (like Siva) survived while others faded into obscurity. Siva grew in popularity when he was "consortified" and given two sons. However, the synthesis of the old with the new cultures was not always smooth as can be read in the tension between Siva and Parvati over the place and acceptance of Ganesa.

The erstwhile director of the National Museum C Sivaramamurti, not following this line of thought, focuses on the theoretical space created by early Vedic descriptions. For him the Satarudriya is the vibhuti (power, magnificence) of Siva's forms, and he sees orthogenetic linkages between Rudra and Siva. For instance, Kapardi (having braided or knotted hair) is not just retained, but is the source of Jatadhara (possessing matted locks). Ausadhi-pati (lord of herbs) and bhisak (physician) lead in a direct line to Vaidyanatha (lord of physicians). The epithet Urmi (present in, characterised by waves), Phenya (existing in foam) and Avasvanya (present in the flow of the stream/roaring) envision the later Gangadhara. Urvara, (corn crop), and Ksetra-pati (lord of the fields) develop effortlessly into Kedaranatha.

Archaeologist TA Gopinath Rao, who is credited for "discovering" the Gudimallamlinga has a very practical and scientific approach. Following Sayana, he reads Surya/Rudra, as the (sun) god of the Kesi-sukta as and visa (which means both poison and water) referring in its earliest expression to the sun absorbing water from the earth. Later this leads to the myths of the drinking of poison, Vedic epithets like Nilagriva and Visapaharana and eventually to the Puranic myth of kalakuta (poison arising from the churning of the ocean) and the form Nilakantha. While accepting the rich philosophical explanations around it, he is also outspoken in his acceptance of linga as a phallus, saying it is the source of all creation and he cannot understand the squeamishness around worshipping it as such. 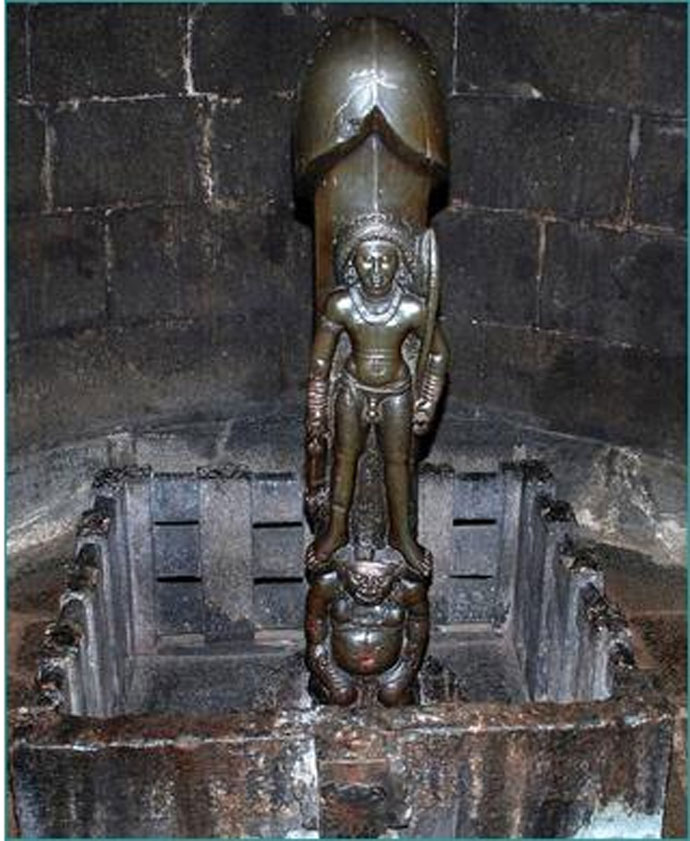 Chitgopekar suggests not only are all myths multi-layered but should be read as representing social fusion and tension when two cultures meet. Take for instance the incident in the Pine Forest (Daruvana). The distraught Siva (in his Bhiksatana form) is roaming naked and the wives of the sages are enamoured by his "beauty". When the sages are angered, he rips his phallus and throws it on the ground, causing chaos, and the linga has to be worshipped to restore peace and order. (In other versions it falls off because of the curse of the sages). Given the utter distaste of the Vedic establishment for worshippers of sisna (phallus) this could well represent the tension of having to include phallic worship and the eventual inclusion of the linga into brahminical worship.

The Daruvana episode also gives an explanation for other iconographical attributes of Siva - for instance the tiger skin on which he sits, his elephant hide dripping with blood and the snake(s) that adorns him. Of course it could well be that the snake comes about because he is extolled in Satarudriya as ahims ca sarvanjambhayan (controlling all snakes). Similarly, the lingodbhava-murti of Siva is believed by some scholars to derive from the Skambha-sukta of the Atharvaveda (AV 10.7 and 8)

I would not consider this preliminary exploration as even having scratched the surface when it comes to understanding Siva. In truth the divine is unknowable, and to try and find his origins is a reckless task. For he is Aja (the unborn) and Anadi (without beginning). But as Chitgopekar asserts, we can certainly work on the etiology of his traits. And as we have begun to see, this is an unbelievably complex process. The interaction between different cultures and belief systems over millennia have produced mythic and divine traits that are not at all easy to isolate.

My own reading is that despite being on the fringe of the Vedic society (just three suktas in the Rg Veda), from being the leader of the vratyas (one of the Vedic "others" like the dasyus, pulindas, nisadas, kiratas and sabaras), he has forever been a force to reckon with. Dangerous, incredibly powerful and uncontrollable. Just read AV 11.2 to get a sense of how terrified they were of him. Over the millennia and particularly with the Puranic process, the custodians of the brahminical texts have managed to pacify him, make him Sankara (he who pacifies) and Siva (the auspicious). They have bound him with a household, given him two sons and an equally powerful wife, probably as a counter balance.

Despite all that, his anger simmers just below the surface as Kamadeva found out the hard way. He has always been and continues to be too powerful to ignore. And too hot to handle. Probably why Kalidasa could write about him in the Gupta period, but the authors/redactors of the epics were not ready to give him his due. That recognition comes centuries later, in the Puranas. Next in this series we'll explore the creation of a sacred geography to mainstream Siva- with the creation of the jyotirlinga matrix. Meanwhile, if you wish to read further on today's topic, I recommend:

3. Encountering Sivaism: The Deity, the Milieu, the Entourage; by Nilima Chitgopekar

4. The Presence of Siva (Mythos: The Princeton/Bollingen Series in World Mythology); by S. Kramrisch

#Rudra, #Vedas, #Lord Siva
The views and opinions expressed in this article are those of the authors and do not necessarily reflect the official policy or position of DailyO.in or the India Today Group. The writers are solely responsible for any claims arising out of the contents of this article.