Living on the edge: Marginalia in Sanskrit manuscripts

A SOAS Sanskrit Reading Room offering, rich with information and a sense of history and gravity.

The SOAS Sanskrit Reading Room session with Camillo Formigatti, John Clay Sanskrit librarian, at the Bodleian, Oxford was a very informative one. I travelled from London along with other Sanskrit enthusiasts to see an ancient manuscript; learn about how it was deciphered; how scores of manuscripts of the same text with verse and commentarial variations were understood in light of each other.

The biggest learning for me was how much scholarly effort and work is involved in transmission – from the original authorial autograph (granthakāra-svākṣara), to the first scribes, to the printed book one buys off Amazon centuries later. MR Kale in this case. 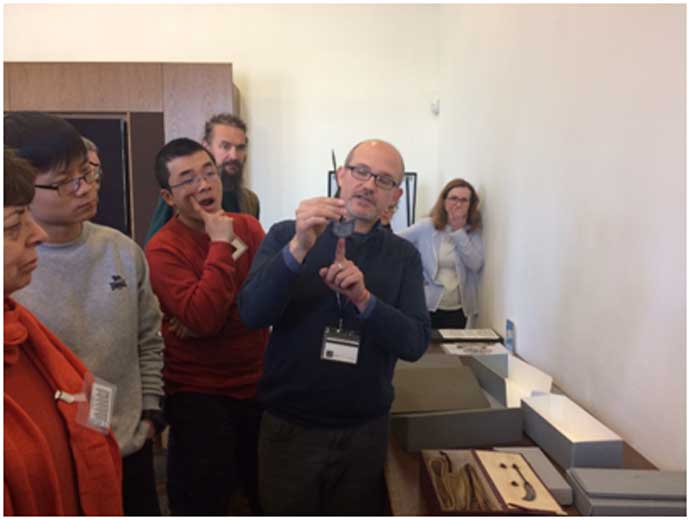 For the first ten minutes, I felt like a fresher attending my first lecture… words like hypomnema, scholia and lemnata left me clueless but I nodded wisely, mercifully screened from the eyes of the speaker by the jaṭābhāra of my guru, Dr James Mallison (senior lecturer in Sanskrit and Classical Indian Studies, SOAS).

A furtive phone search told me that Codicology was the study of manuscripts and their interrelationships. Sigh of relief. The next slide onward I was on familiar Sanskrit territory.

On the margins of manuscripts, Camillo told us, we could expect to find, courtesy a scribe or a commentator - padaccheda (word division), anvayokti (explanation of syntax), padārthabodha – a gloss or a quotation, laukika and alaukikavigraha (ordinary language and technical grammatical explanations) and tātparya – an authorial explanation, a gist. In addition we might find decoration, corrections and an invocation.

Camillo explained how a folium (pattra, leaf) of a manuscript works. The text is run on, with no punctuation other than the occasional vertical line (daṇḍa) and no word breaks. Every now and then graphic markers might appear – three dots, fine vertical lines, an oblique line, or an arrow / called kākapāda (crow’s foot).

Śrīnātha’s commentary in centre, verses in the margin.

These are duplicated in the closest margin to explain a word, a correction, or to detail missed or deleted words. Commentary and glosses are written away from the text – if on the top margin, the closest line to the text is read first, then moving upward. Conversely on the bottom margin.

The left and right margin are used too, often to indicate the chapter number and name of the text. Camillo also showed us a 17th century Newari manuscript of Raghuvaṃśa in which the commentary of  Śrīnātha was in the centre and the verses were in the margin!

He then took us through some verses from Chapter 1 of Raghuvaṃśa from a 17th century Nepālākṣara manuscript with an anonymous commentary in the margins. Each verse was additionally supported for our understanding by the commentaries of the big boys of the medieval Sanskrit world – Mallinātha, Vallabhadeva, Aruṇagirinātha and Jinasamudra.

Not only did we see that different manuscripts used different words in certain verses, but also that they changed the order of verses and sometime inserted or deleted them. For instance, dākṣiṇyayuktena rather than dākṣiṇyarūḍhena (1.31), in explaining the name of Dilīpa’s wife. A verse concordance explained how the verses compared in the different versions, and an example of a variant was identified for our benefit. (1.34-35)

Interestingly the Raghupañcikā of Vallabhadeva includes three verse (IV.31, IV.43, and IV.69) which are missing from the more commonly used text of the Raghuvaṃśa with the Sanjīvanī of Mallinātha.

Lidia Wojtczak, (senior lector in Sanskrit, SOAS) says it best… “When we pick up an edited text, we are usually only reading one of its versions without realising the abundance of other 'versions' which existed in other scholarly traditions. In the case of the Meghadūta, for instance, the discrepancies between verse numbers and placement is really quite significant - different commentarial traditions present us with between 110 (Kerala) and 127 (Jain poets of Western India) verses. So when we pick up a printed book called Meghadūta, we're not really reading the Meghadūta, but a Meghadūta.” 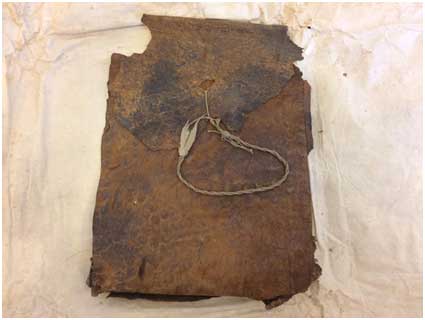 During the session, we saw and understood that Sanskrit works might be preserved in a variety of scripts. Śāradā from Kashmir, Bengali or Newari (Nepālākṣara) from the east of India, Telugu from the Andhra region, Grantha from Tamil Nadu, Malayalam from Kerala to name but a few.

I understand from subsequent study that Sanskrit manuscripts are available in about 40 different scripts in South and South East Asia. Other than the script, in Codicology the scholar must be conscious of the hand or hands: is the scribe one or many?

S(he) must be conscious of the distribution of space on the page, the location of annotations, differentiating between the main text, annotations and additions, content and layout of annotations as well as their treatment in relation to the available space.

The real treat Camillo saved for the last. All the theoretical information he shared with us came alive when we finally got to see the manuscripts. To begin with, the 17th century Raghuvaṃśa manuscript.

Individual pattras (leaves, folia) were interleaved with bespoke Japanese paper. Anything thicker would stress the delicate pattra, he explained. So fine were they, that I was scared to breathe on them as I took pictures. They reminded me of vark (edible silver leaf). No wonder then that they were originally secured in a leather pouch. 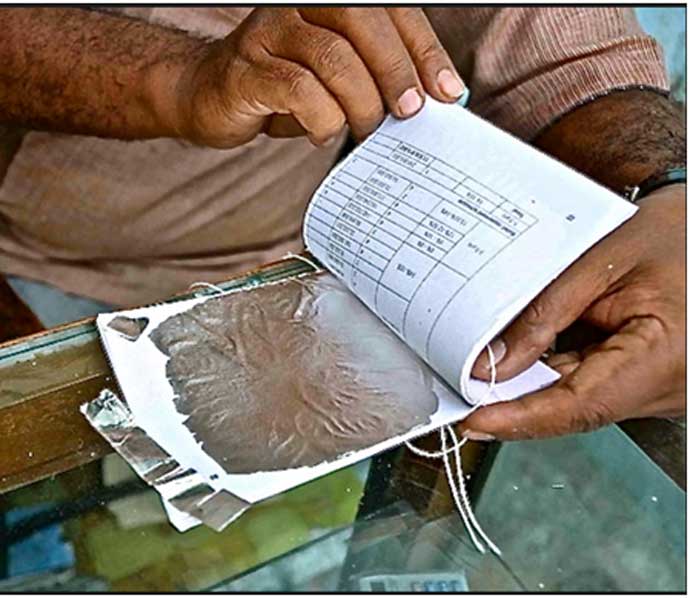 Manuscripts were written mostly on folia made of birch bark (bhūrjapattra) or treated palm leaf (tāḷapattra). They were bound through central holes toward, but not in the left and right margins. Very often they had a hole in the centre through which all the folia were threaded – hence grantha, strung together, composed (√grath, 9P, to tie or fasten together).

In Jaina manuscripts, it was traditional to make a decoration around the aperture – a different one for each page. 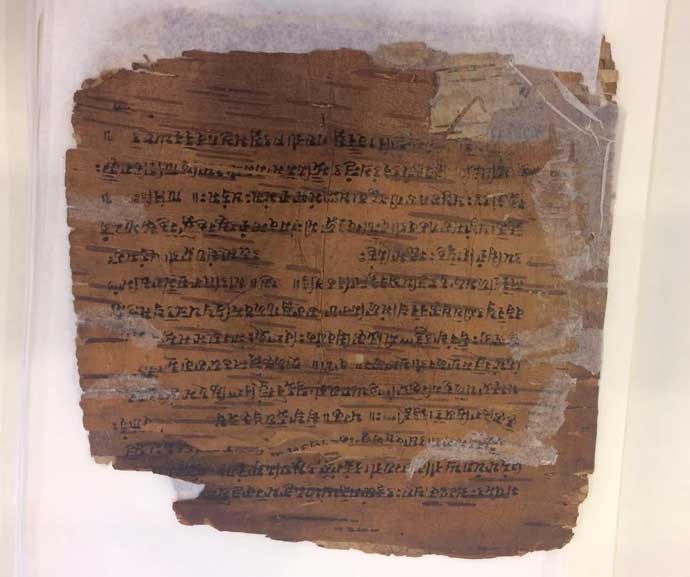 The prepared folia were inscribed with a special fine tipped stylus (nārāca) made of iron, silver or brass and then inked and dusted. The back end of the stylus has a flat blade for scraping out mistakes and rewriting.

A participant shared a wonderful story of how laddish students would sneak in in the middle of the night and mess up a manuscript their guru had worked on during the day with snarky comments. The tradition takes itself so seriously that we rarely if ever hear of such incidents. It’s good to know that boys will be boys!

All in all, the session was a real treat. A SOAS Sanskrit Reading Room offering, rich with information and a sense of history and gravity (We were required to leave everything potentially damaging to the manuscripts outside the chamber, including drinking water…).

The respect shown to the manuscripts was awe inspiring. I hope not to lose the thread of learning that began with this session.

Also read: Why are women not allowed to chant or study the Vedas?

#Sanskrit literature, #Sanskrit
The views and opinions expressed in this article are those of the authors and do not necessarily reflect the official policy or position of DailyO.in or the India Today Group. The writers are solely responsible for any claims arising out of the contents of this article.