I've been very patient with India's "indie music scene". Encouraging, even. Because I can't play any instrument myself, and I don't have the nerve to perform anything in front of a crowd, I realise it isn't fair to boo anyone off the literal or figurative stage - at least they're trying. However, I am often in the audience, where I hold you, the performer, responsible for how much I have to drink on a Saturday night; and I am always on the internet, where you ask for my attention. And so sometimes, your business becomes my business. Especially when you also ask for my money.

This week, my Facebook timeline has been a wondrous cacophony in equal parts of rainbow-coloured pride photos and a raucous debate that I have watched and followed closely with morbid fascination like one would with a video of an alligator biting off someone's arm or of childbirth; or both back to back, if you're trying to work out which might be more painful.

The fundraising campaign for the 'high art' project.

There are plenty of artists on my Facebook timeline, some are friends, others I'm connected to for no obvious reason - the boys are usually having a #top, #uber, #epic or #mega party with their #BrothersFromOtherMothers, full of self-praise and a Peter Pan complex. The women are trying hard to be deep and meaningful about things like #cupcakes (sorry, #macarons; macarons are the new cupcakes), #unicorns, and going #ToTheMoon (where some of them should just stay put, frankly), but also about #loving, and #living, and that awful strain of passing, trendy feminist nonsense, aka #sisterhood. Because both these groups are hurtling at warp speed towards their 40th birthdays, it is no longer cute nor acceptable, in my opinion. But I have learnt to shut my mouth for the greater good (world peace), barring the occasional screenshot of something exceptionally ridiculous that I might share on a WhatsApp group of my closest friends, otherwise reserved for exchanging idiotic memes of dogs with flower pots on their heads. 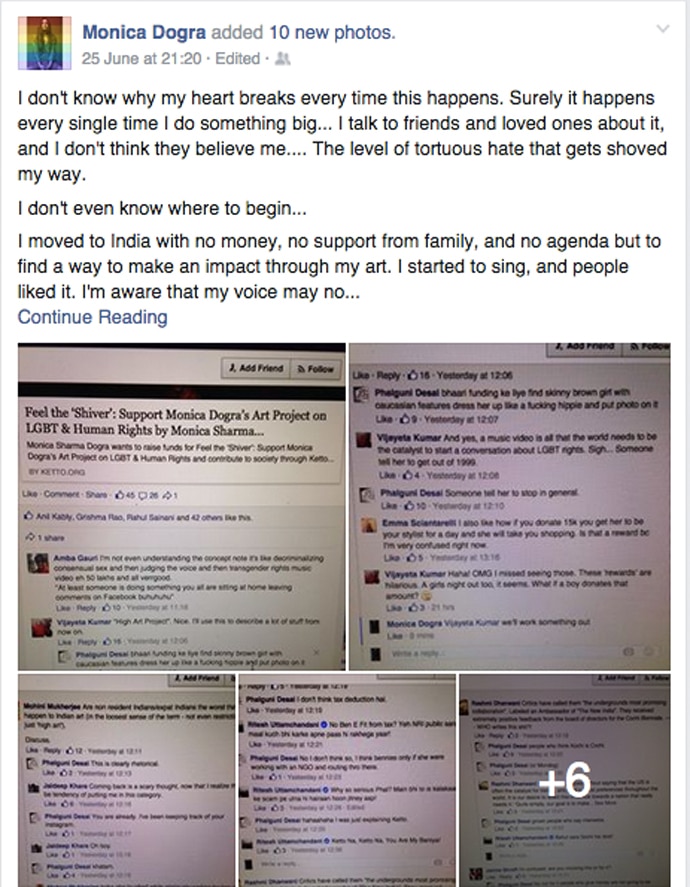 A post on the 'Shiver' project, by Monica Dogra.

But then Monica Dogra announced her "high art" project and, well, annoyed a whole bunch of people. She's been on the "scene" a few years now, with her la-la-la poetry and #OneLove #SoulSister shtick, and I've let it pass because if I don't like it, that's my problem; there are plenty of people who do. As one half of electro-rock band Shaa'ir + Func, with guitar hero Randolf Correia, she sticks bindis all over her body, talks staccato into the mic with an American accent, and makes her bare midriff writhe and shift like she's been possessed by multiple non-alcoholic spirits on stage as she "surrenders to the music". I might think she needs an urgent smack on the head with a broom - exorcism, not violence, how dare you? - but I'm not the one with a growing fan base. She'll also share unnecessary details about colon cleanses on Facebook, give TEDx talks in which she gives herself props for being both beautiful and intelligent, and in interviews talk about wanting to squat into the ground while on her brightest-red period because #MotherNature or #HippieFeels or some such. If that's helping her connect with fans in deeper, personal, more meaningful ways, then that's great; good for her.

The wild irritation with Dogra has grown on social media this past week because her "Feel the Shiver" campaign asks friends and fans to give her money so she can make a music video with some very big international names. I think that if she had simply said: "You guys, I have a shot at making this cool video with Ryan Heffington (he choreographed Sia's Elastic Heart and Chandelier) but I need cash moneys - HELP!" she might've received plenty of high-fives and support (monetary and otherwise) from her friends and fans as usual, and everyone else would continue to mind their own sweet business. Instead, she put a bunch of complicated sentences together and pretended they meant something important, inviting both genuine questions and unbridled amusement from those who recognised a lack of understanding, an exploitation even, of what is a very real issue for the communities (LGBT) she's claiming her support for.

“Shiver” is a high art project, through the medium of music video meant to be a catalyst for dialogue within communities that are usually exclusive in their tastes and reach. Film, television, fine art, fashion, music and theatre are all powerful, altruistic, and progressive communities, that stand alone as islands at a very critical time. This is an opportunity to stand at the leading edge of the social justice movement, if these communities come together to become that tsunami of change. The question has remained though... how? How do we bring these communities together?"

"LOL, whut? Through a music video that's going to cost Rs 50 lakh?!" roared the good but unforgiving people of the "interwebs". "We think not." It didn't help that Dogra's rewards for supporters included shopping and partying with her. What on earth does any of that have to do with LGBT and human rights, people wanted to know? (Also, has she done the math? Let's say people are happy to donate Rs 15,000, which gets them one day of shopping with her. In order for her to reach Rs 50 lakh, she needs 333 backers. Even if she only takes every other Sunday off, that's a YEAR of shopping with random people before she can get down to actually shooting this world-changing video.) "Arre, behen," said one guy. "I'd rather have a chutney sandwich," said another.

And there began instead a tsunami of questions and criticism that Dogra, much like the other artists of the "indie scene", was ill-equipped to handle. You see, most of our indie artists have risen to fame for reasons that are not strictly restricted to talent. It's not their fault either; we've been so starved for non-Bollywood music, that we've been blindly encouraging of anyone wanting to have a go at any of the other stuff. Because we have wanted the scene so bad, we have rarely had the heart to give anyone constructive feedback (sometimes, simply, "You guys need to practise more" or "How about actually showing up for sound check?") when things finally gained momentum and started to grow. In turn, artists have often fed us mediocrity, and we've applauded it anyway in the spirit of things, so they're not used to being criticised or questioned. When everyone basically went "WTF, Monica?" she took to Facebook to play victim of the "tortuous hate" from people who were just trying their damnedest to decode what she was trying to say.

When you ask for other people's money, you have to tell them what for, and it needs to make sense to them. Instead of attempting to explain how exactly such a massive sum of money is going to actually help anyone, Dogra went on about being "very hurt", and her friends took to attacking her "haters". It's good to have people in your corner, reassuring really, in this increasingly cruel and unpredictable world that we live in; but as a fairly established make-up artist, Elton Fernandez, do you really want to be the guy that calls a girl ugly because she questioned your BFF about her project? This is the high school equivalent of someone saying your science project sucks, and you responding with "Yeah, well, your mother is fat." Excellent point, at age 12.

I've had to update this story at least four times since I started writing because this campaign and the reactions and dialogue it has instigated is a gift that keeps on giving. But the bottom line is this: With high art comes high responsibility. If you can't back what you're pretending to fight for, at least have the decency to be honest with your #tribe.

#Indie music, #Monica Dogra
The views and opinions expressed in this article are those of the authors and do not necessarily reflect the official policy or position of DailyO.in or the India Today Group. The writers are solely responsible for any claims arising out of the contents of this article.

Writer, editor, and reluctant film critic. She likes mangoes, staring at walls, and pretending she lives in both Delhi and Bombay.