#MovieReview: Sushant Sigh Rajput and Sara Ali Khan's Kedarnath gets washed away in the flood

Mansoor Khan (Sushant Singh Rajput) is a pithoo or a porter who helps pilgrims at Kedarnath get that much closer to their faith. The irony is not even subtle, but that is okay because we’re used to extremism in this country. Mandakini Sharma (Sara Ali Khan), the pundit ki beti falls in love with this Mansoor. Hello irony, meet face. Smack!

But Mukku (short for Mandakini) is betrothed to Nishant Dahiya, the influential local neta’s son, who was first betrothed to Mukku’s older sister, but charmed-enough and shameless-enough to ask for a switch. Punditji obliged, because, fear of power and greed. He envisions the development of the valley, he wants to build more hotels to host more tourists, which will obviously translate into more business. Even for Punditji. 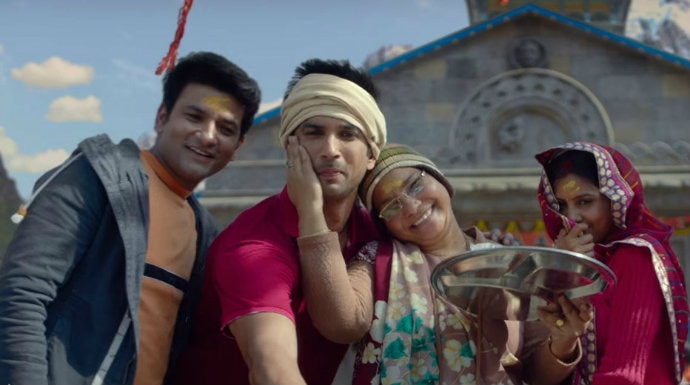 If Kedarnath, as it were, is a microcosm of the country we’re living in, then there are sceptics in the bunch — exactly how there are around us — who wonder if the valley can take all this. What is the price for such advancement, mechanisation, industrialisation? But the man with a vision is farsighted.

Kedarnath takes the whole of the first half and a bit of second half in establishing a conflict, a divide, a problem we all know too well. We pretty much live it. Hence it somewhat slows the film considerably down. Communal divide and ‘ooch-neech’ is any way Bollywood’s pet, and it has always woven love stories around it. Kedarnath, therefore, offers nothing new.

While Sushant Singh Rajput delivers a tepid performance, Sara shines. Simply because you see flashes of Amrita Singh in her too vividly. She is bubbly, she owns the space around her and speaks, or at least tries to, speak with her eyes. Juxtaposed against Sushant’s nonchalance, therefore, Sara comes alive. Rumours of disagreements between Sushant and director, Abhishek Kapoor had been doing the rounds all through the shooting of the film. But like most ‘little birdie told us’ stories, one pays little attention to it. But then when you see Sushant give up acting midway, pick up after a point, and then drop his weight on the floor after, your heart sinks. Either the fights were real and they have taken a toll on his performance, or worse, he is losing his sheen. He is not the Ishaan Bhatt we fell in love with in Kai Po Che any more.

But an absentee lead actor or an oh-so-slow first half is not Kedarnath’s biggest enemy. It is the poor CGI. Why Bollywood can never use CGI to create good cinema is a question that’s always been on my mind. Baahubali and 2.0 can, but Thugs Of Hindostan fails. So does Kedarnath. A particular scene that shows a house rat trying to escape torrential showers as it climbs down the thatched roof makes you wonder if someone just changed the channel to Nickelodeon. Same was the case with a mule struggling to hold on in the flood. When the flood finally hits, it takes Kedarnath away with it. The expression of horror is not horrific enough. The devastation is not devastating enough. The deaths are not gut-wrenching enough. It somehow lacks the very ‘shraddha’ Kedarnath was built on.

But the ending defeats all the above. Sushant Singh Rajput’s own Shah Rukh Khan moment — the arm-spreading one — jolts you back into reality and reminds you that you are after all watching a Bollywood potboiler. Willing suspension of disbelief is served with the popcorn.

Also read: #Kedarnath poster is out: How long will Bollywood's men carry their lady loves on their back!

Post your comment
#Abhishek kapoor, #Movie Review, #Sushant Singh Rajput, #Sara ali khan
The views and opinions expressed in this article are those of the authors and do not necessarily reflect the official policy or position of DailyO.in or the India Today Group. The writers are solely responsible for any claims arising out of the contents of this article.