'Photograph' Movie Review: Nawazuddin Siddiqui and Sanya Malhotra starrer is out of focus and blurry

There is so much more that could be sharper in focus here. This 'Photograph' simply remains one amongst many such.

This line was meant to be a reminder of one’s ‘aukaat’ or class — ‘Whatever you earn in a month is what my daughter spends in a day’ went (almost) every love story in the 70s.

In Rafi’s case (Nawazuddin Siddiqui) — a photographer moving with his DSLR and an instant photo-printing machine around the Gateway of India, trying to make a living by clicking photos for tourists in a smartphone generation — this line is not condescending at all.

It is the gospel truth.

Miloni (Sanya Malhotra), on the other hand, though not resolute to spend all that money, very well can. A topper in charter accountancy, her future is bright — that is, of course, if her conservative Gujju family doesn’t force marriage upon her.

As a story, Photograph had potential. Quite as much as The Lunchbox did, Riteish Batra’s previous presentation. In essence, it was meant to be a story of a different kind of love — like The Lunchbox — not bound by the definitions we thrust upon it.

Yet, in reality, it turned out to be bland — quite unlike the lip-smacking food served in The Lunchbox.

For starters, even at the risk of being called biased, I am a bit tired of Nawazuddin. The earnestness he had in The Lunchbox as the quintessential ‘hero ka dost’ has given way to a sort of complacency that comes from knowing you’re the star in the film. If walking out of the theatre, I am in fact more enthralled by Sanya’s performance, it is not good news for Nawaz — though great news for Sanya. His limitations are finally showing. And Sanya is fresh. Sanya is hungry. Sanya is not just the Dangal girl anymore!

The one portion of the film I thought had most potential was left unstirred — Nawaz and Vijay Raaz’s dialogue (or was it a soliloquy? It most certainly was). Vijay is seen in but one scene as the ghost of Tiwari — a man who hanged himself in the very same ‘chhapra’ (makeshift asbestos houses made for a budget living) which Rafi now shares with five others. A roommate who claims to have seen his dead body hanging from the ceiling fan believes he died of loneliness — leveraging it to convince Rafi to get married himself. Although, of course, Tiwari’s reasons could have been vastly different — that we shall never get to know.

One particularly restless night, Rafi’s subconscious takes Tiwari’s shape and through a dialogue with him, over a shared bidi, he decides the course of his life — he wants to quit making a meagre sum from clicking photographs and wants to start re-making Campa Cola. 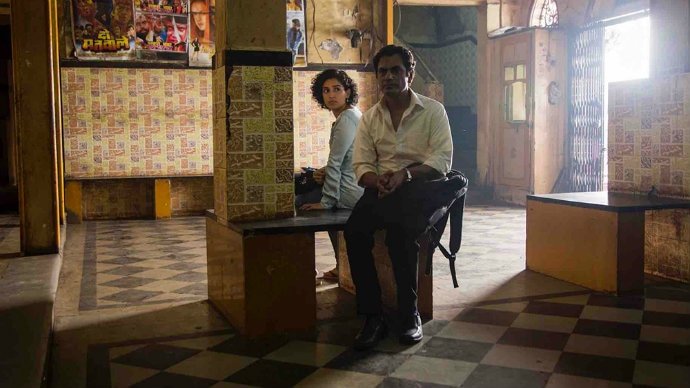 Soon, however, with Tiwari, the only thing exciting about the film also vanishes into thin air — quite Shakespearean, if you ask me.

Then there is the very brief reference to another one of William Shakespeare's works — Othello — and the fair-skin dark-skin complex.

What Miloni and Rafi share is not a love story. They don’t even have a moment — they can’t, and in that, Riteish stays true to the milieu he has created. But there is an inexplicable attachment, pregnant with a possibility, a possibility as improbable as the ghost of Tiwari itself.

Through the 70s, or the better part of commercial Hindi cinema, rich girls have always fallen in love with boys who never seem to make enough money but are always reaching for things a little beyond their reach. And in that, class conflict has always been the yeast that makes the daily bread of love stories rise. So, Riteish is not telling a new or even a different story. The only thing he does differently — and thank God for that — is leaving it open-ended. And while the abrupt end was befitting, it still left you feeling underwhelmed after the two hour-odd cinematic experience.

If only Riteish had adjusted the aperture and waited for enough light to fall on the Photograph!

Also read: 'Photograph' Review: Ritesh Batra celebrates the journey over the destination in the Nawazuddin Siddiqui and Sanya Malhotra starrer

#The lunchbox, #Ritesh batra, #Sanya malhotra, #Nawazuddin Siddiqui
The views and opinions expressed in this article are those of the authors and do not necessarily reflect the official policy or position of DailyO.in or the India Today Group. The writers are solely responsible for any claims arising out of the contents of this article.