Pink introduces us to feminist man and patriarchal woman

Meet the unicorns of the discourse on feminism.

I try to avoid preachy Bollywood films like the plague. I recently realised how Hindi cinema is like the Salman Khan of film industries. I mean (for the most part), it’s sexist as all hell with stalker-lovers and objectification,  and then, as if in atonement, it shoves altruism and morality down our throats. I call it the Charity-Begins-At-Assholery Syndrome.

This is why, when I went to watch Pink, I was mentally prepared. For lecture-baazi; weepy, helpless women; the tumhari-maa-aur-behen tripe; a patriarchal narrative, cloaked in feminist cliches and a big mess of good intentions and ingrained sexism.

There was all of that. But I found myself relating to the film more than loathing it.

It was a film about monied men having their way with women. Stereotyping women who drink and live alone. Looking at even kind-old-men with suspicion and fear. Having guys think girls are easy because they make dirty jokes. Slut shaming. Mud-slinging. Bottle-smashing a guy full in the face (okay fine, that bit isn’t relatable… yet).

It was a film that was preachy, but its relatability trumped its perceivably manufactured-altruism.

The film also did something else. It brought to light two characters we don’t often have the good fortune of getting to see or discuss in Bollywood. A feminist man and a patriarchal woman. The unicorns of the discourse on feminism in general. 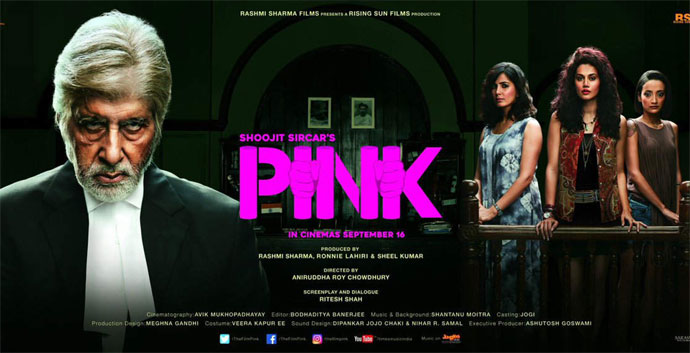 It brought to light two characters we don’t often have the good fortune of getting to see or discuss in Bollywood. A feminist man and a patriarchal woman.

Amitabh Bachchan, in a convincing turn as Amitabh Bachchan, played the feminist man in Pink. He had an ailing wife, whose opinion he regarded and respected. He had a vogmask and a mental condition (for no reason at all, but to make him seem too weak to be an aggressive mansplainer, I imagine). And he had a law degree. He took on the case of the women in the film who had been molested, but were countercharged with attempt to murder, since one of them had near-blinded the guy who tried to grope her with the help of a bottle and intense rage.

("The women eventually had to be rescued by a man," a friend scoffed. True enough, but let’s save that argument for another day.)

That aside, few voices as convincing as Bachchan’s throaty barritone can drill the idea of women’s agency into the heads of audiences across the country. His role (well, mostly if not entirely) was a celebration of the guy who doesn’t think feminism is a bad word. The guy who doesn’t lob the "feminazi" grenade everytime a woman calls out his sexism (read: bruises his sense of entitlement).

This is the guy who understands that women who drink and smoke, have sex and make dirty jokes don’t fit in your simple binaries of "one of the guys" or "easy slut". The guy who believes our boys need saving and not our girls. The guy who doesn’t ask why rape laws exist when there is so much malicious prosecution. A dude who doesn’t believe marital rape is totes cool bro because sanskar. And a guy who talks at your face instead of your tits. The man who doesn’t think his perverse worldview decides what a woman ought to be.

This guy exists. And this guy needs to be celebrated. He is an important part of the feminist movement and I’m glad Pink (though in its flawed way) celebrated this man. This man who roasted the guy who loosely throws around the word "raand".

The police woman, Sarla Premchand. For those who haven’t seen the film – she is the woman who writes up the police report for the poor-little-rich-molester.

Sure, her character comes with qualifiers. She presumably took a bribe from the boys of drunk-prostitutes-ki-bajao fame (the "financial circumstances" clause). She was brought up in a patriarchal set-up (the "familial circumstances" clause). She was a working woman and very important in her role as SHO of the Surajkund Police Station (the "paradoxical-nature-of-argument" clause).

Qualify and defend all you want, but the simple truth is that babies aren’t born sexist. Sexism is taught, and all these clauses come together to bind you in a contract-drafted-by-patriarchy you didn’t really know you had put your initials on.

Sarla the SHO, like all the other society aunty-jis in the film, was taught that women who aren’t respectable police women, naturally, "pesha karti hain". If she was a feminist, her feminism was easily bought. I dare say though, that the spite with which she spewed venom at the victim’s father and her two friends suggested otherwise.

Her character, however, threw light on the woman who circumstances-be-damned believes mera beta best hai. The woman who doesn’t get these "bra burning types ya". The woman who slut shames the girl who’s open to talking about her sex life. The woman who puts down another for wearing too much make up (or too little).

This is the lady who will bully a girl for taking offence on hearing a sexist joke. The woman who will sneer at your errant bra strap. The one who will call women over-sensitive or too-forward.

This woman exists too. And this woman is anathema to the cause of feminism. I mean, isn’t insidious indoctrination the best? It cuts across class and privilege and gets women to in-fight for the cause of those who have oppressed them for centuries. Thank you, patriarchy!

These two characters, however, in my opinion, are worth mentioning.

To close (and also as a subtle post event plug) I’ll leave you with this. Recently, at the Mind Rocks Summit, "Our feminist men need to be empowered even more than women", roared Kangna Ranaut to an audience full of star-struck school and college children. She was talking about Pink and making a reference to Amitabh Bachchan and Shoojit Sircar.

It was one of those almost-erupt-with-applause-but-wait-what?! moments. Up until the sentence took a disastrous turn after the word empowered, she had me. And now, in retrospect, I realise, that moment and that sentence, was single-handedly, an embodiment of both the feminist man and the patriarchal woman.

Also read: Pink helped explain to my 11-year-old daughter what I couldn't

Also read: Do you really need a Bachchan to sell feminism in Pink?

#Feminism, #Amitabh Bachchan, #Pink
The views and opinions expressed in this article are those of the authors and do not necessarily reflect the official policy or position of DailyO.in or the India Today Group. The writers are solely responsible for any claims arising out of the contents of this article.