He is a riveting watch as the kohl-eyed bootlegger and a businessman of character.

The trailer of Shah Rukh Khan’s January 25 release Raees makes one want to break into a whistle. After having to deal with brickbats for his choice of roles in films like Happy New Year and Dilwale even though they turned out to be money-spinners, Shah Rukh Khan reclaimed some of his lost creative ground and gained critics' favour with a double role in the 2016 release Fan, directed by Maneesh Sharma.

Then he followed it up with a measured performance in Gauri Shinde’s Dear Zindagi. However, with Rahul Dholakia’s Raees, SRK is making bad look good and droolworthy all over again. In fact, barring the out and out romantic hero roles which he has essayed on the silver screen, the superstar has steered clear of playing the squeaky clean protagonist.

His roles have always boasted of layers and even though the character may not come across as an exemplary role model, his performance has always managed to persuade his fans into rooting for the character. Also, there is a very thin line separating the actor from the persona and, perhaps, that’s the reason he elicits extreme responses.

You can love him or you can hate him, but you cannot ignore or be indifferent to the phenomenon called SRK. From the looks of the trailer, Raees conforms to the template of the quintessential "masala" potboiler.

The "paisa vasool" commercial vehicle is a deadly concoction of the "good versus bad", "the protagonist having his own sense of right and wrong strongly influenced by his mother’s principles", "the swagger laden strut and dialogues", "the whistle inducing face-off", "the romantic interlude", "the villain who is as good as the hero" and the "item number" - an all male gun-totting world where parleys are won with brain and brawn.

Raees clearly lives up to the notion of the "hindi fillum". When kitsch is done well, its cool and how! The film has a larger than life canvas and tells the story of a bootlegger who locks horns with a cop during the 1980s. 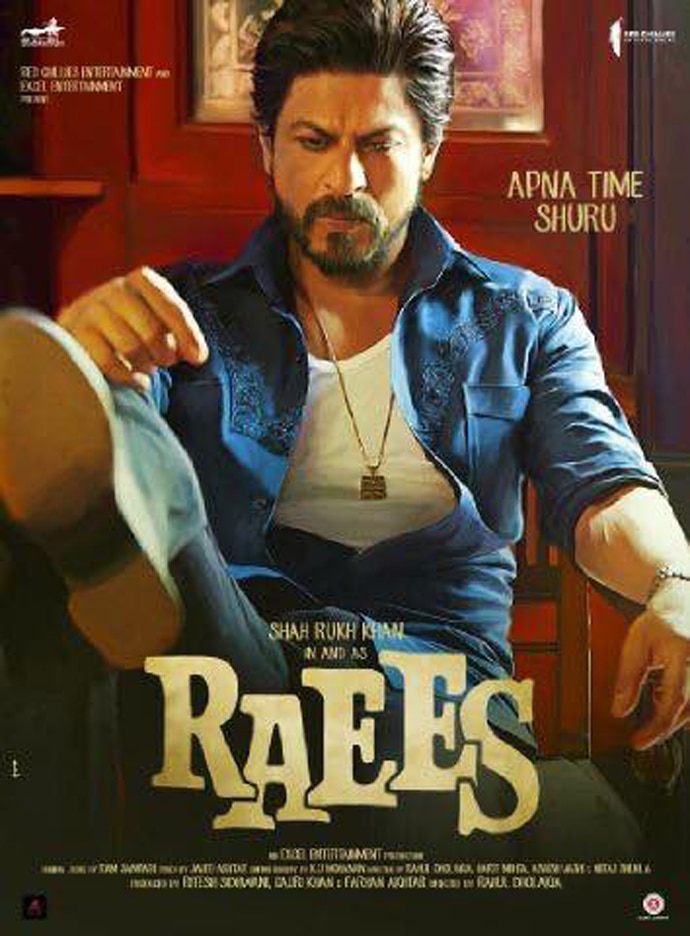 SRK plays the kohl-eyed bootlegger with unmatched ease. A character of principles when it comes to his "dhanda" even though the business might be illegal and that’s what lands him in trouble with a thick-as-nails cop essayed by the riveting Nawazuddin Siddiqui.

Many reports alluded to the film being based on the life of Abdul Latif, a real-life don from Gujarat. The makers, however, have refuted claims that Raees is a biopic.

Pakistani actress Mahira Khan makes her big Bollywood debut as SRK’s leading co-star in the film. Even though she is the film’s heroine, her presence has been underplayed given the fact the presence of Pakistani actors in Hindi films has attracted severe protests after the Uri attacks.

The retro atmosphere is empathically established as the background score borrows generously from the 1980 chartbuster "Laila O Laila" and leaves us with a glimpse of Sunny Leone twirling in tune to the iconic number.

Raees is directed by Rahul Dholakia, the National Award-winning director known for his directorial debut Parzania. Dholakia who set his first film in Gujarat returns to the same territory and is all set to unleash a whole new narrative.

The film will clash with the Hrithik Roshan starrer Kaabil at the ticket window and SRK will leave no stone unturned in ensuring that Raees emerges the bigger blockbuster. While the trailer seems to suggest that the film has the qualities of a bona fide blockbuster, the film when it releases will eventually unveil the climax.

#Mahira Khan, #SRK, #Raees
The views and opinions expressed in this article are those of the authors and do not necessarily reflect the official policy or position of DailyO.in or the India Today Group. The writers are solely responsible for any claims arising out of the contents of this article.