Despite often being scoffed at by the purists, Rahat Indori’s evocative and easily graspable poetry, richly expressive of life and our common social concerns, makes him the poet of the masses. The fiery poet passed away on August 11, 2020.

My introduction to Rahat Indori had the background score of thunderous applause - just as his name was announced at the Mushaira. A dark bald man – looking more like a retired PSU employee than a poet – slowly walked to the centre of the stage. As his recitation unfurled – a street-drawl tone laced with mischievous wincing of one eye, smirks, and sarcastic laugher – it was like an impassioned personal conversation with humanity.

Zooming on him with my long lens, I saw his eyes were not on the audience, they hovered above towards the roof of the pandal as if he was addressing a common spirit rising from the collective. His eyes rolling towards the sky, the hands animatedly rendering in space the contours of his imagination. As this rousing recitation progressed, his aura loomed over the entire gathering. He was soon like a Moses of Urdu, raising the oceanic applause to the command of his verse. 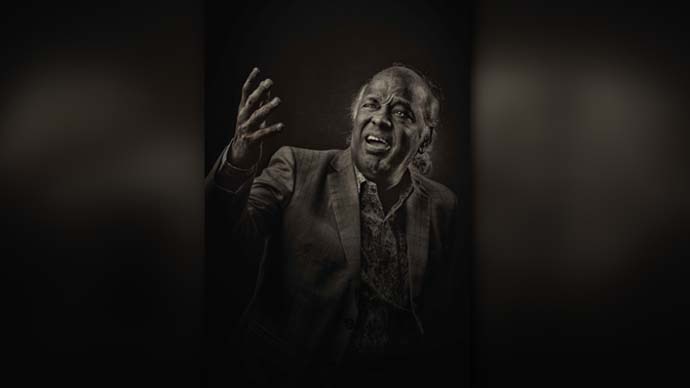 Rahat Indori was like a Moses of Urdu, raising the oceanic applause to the command of his verse. (Photo: Bandeep Singh / India Today)

Known and feted for his dramatic recitation, Rahat Sahib, along with poets like Munnawar Rana, popularised and brought back the dramatic `tahat’ or the spoken oration of Urdu ghazal which by the 1970s was largely read in `tarannum’ or the singing recitation. It was an age of being angry and tarannum recitation seemed to bind and soften the edge of defiant thought. And for Rahat Indori, this defiance was the very credo of his poetry. If not for his powerful and sometimes risqué love poetry — which tempers his revolutionary fervour — Rahat would easily make a Che Guevara of contemporary Urdu verse.

His most quoted verses are the ones that are scathingly contemptuous of the political establishment and extremely critical of the current attempts at cultural homogenisation. His iconic ghazal, Agar Khilaaf Hain, appears as if a startling articulation of the recent anti-NRC protest sentiments.

This last sher is the nearest possible expression of an expletive in Urdu ghazal. It vocalises the poet’s explosive anger towards forces that threaten India’s composite culture. No wonder, this couplet was seen all over on posters at Shaheen Bagh.

Rahat Sahib’s poems draw parallels with the verses of two other fiery poets of the 1970s — Dushyant Kumar and Faiz Ahmed Faiz. Strongly anti-establishment, his poetry is not an articulation of an intricate exploration of the self but is an intense expression of his social engagement with life and its contemporary political concerns. The tone of his ghazal is more exhortatory than revelatory.

Despite his frequent addressing of the crises of Islamic faith in India, Rahat’s poetry is steeped in our composite culture. His disruptive use of Hindu cultural symbols in his Urdu is to assert his Hindustani identity.

A distinct feature of Rahat’s writings is his use of Urdu spoken in the lanes and by-lanes of Indian towns — complete with its slangs and twangs — just as the use of the word ‘thikaane’ above. This is best illustrated by this ghazal which employs the street slang ‘jaane ka nai’ even using the sound of ‘nai’ instead of ‘nahin’. Despite often being scoffed at by the purists, Rahat Indori’s evocative and easily graspable poetry, richly expressive of life and our common social concerns, make him the poet of the masses. His poetry can be identified by even looking at a silent video clip of the Mushaira audience. People clapping animatedly would mean a poet like Gulzar Sahib or Javed Akhtar is on stage, audience ecstatically throwing up their arms in the air would mean someone like Waseem Bareilavi or Gopal Das Neeraj is reciting, but when you see the gathering — especially young men — leaping from their seats in frenzy like football fans, their eyes dilated in rapture and baring their teeth as they shout, know that Rahat Indori just read his ghazal.

Also Read: Mitron, this is the Army chief speaking

#Ghazals, #Urdu Poetry, #Rahatindori
The views and opinions expressed in this article are those of the authors and do not necessarily reflect the official policy or position of DailyO.in or the India Today Group. The writers are solely responsible for any claims arising out of the contents of this article.