Baahubali director SS Rajamouli’s next film is RRR, the trailer of which was released on Thursday, December 9. RRR is a Telugu film that will release on January 7, 2022. The film stars Jr NTR, Ram Charan, and Bollywood stars Ajay Devgn and Alia Bhatt. Produced by DVV Danayya, RRR is a fictional story that portrays two Indian revolutionaries during the British Raj. The trailer of the movie received a thumbs-up on social media after its release.

You can watch the trailer in both Telugu and Hindi. After watching the trailer twice, here are 5 things that we found were absolutely striking.

1. THE GREAT VISUALS: The 3.16-minute trailer of RRR is a treat to the eyes. The visuals are quite impressive, and will definitely offer a great theatrical experience. From the tiger roaring in the beginning, to the fight scene in the woods, the visuals of the movie are nothing but spectacular. It is sure to remind you of Rajamouli's earlier visual spectacles Baahubali and Baahubali 2.

2. PACKED WITH ACTION: In the RRR trailer, you can see a series of action scenes including long jumps, running along a train, and much more. You will think about Rohit Shetty once for sure (no Scorpios spotted turning turtle though). 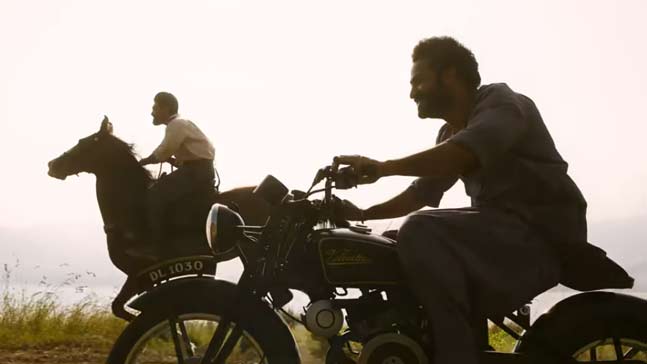 A still from RRR

3. WE WANT MORE: The trailer is quite interesting, and can leave the viewers hooked to the screen. So, definitely, we want to watch more super soon. That's January 7, actually.

4. GOOD ACTORS, ALL TOGETHER: After watching the trailer, another thing I can say is: watch the movie if you want to see some good work. Yes, RRR can be one of the best works of Jr NTR and Ram Charan. Ajay Devgn and Alia Bhatt get some scenes in the trailer, and those few frames look promising.

5. PLEASE, NO COMPARISONS: The movie is by the same director as that of Baahubali, and the visuals are quite stunning too. Chances are very high that the viewers will compare this to Baahubali. But please, let’s keep the two movies apart.

And now - the main bit of the trailer that was quite striking. A skull cap seems to have gone missing between a teaser of RRR and the trailer. There were several controversies around the portrayal of Komaram Bheem, played by Jr NTR in RRR. A promo released in October 2020 had Jr NTR wearing a skull cap - a scene that angered several political leaders. The film's team had also explained why there was a skull cap, given that Komaram Bheem was not a Muslim. In the trailer, Jr NTR is not seen wearing a skull cap.

#SS Rajamouli, #Alia Bhatt, #Rrrtrailer
The views and opinions expressed in this article are those of the authors and do not necessarily reflect the official policy or position of DailyO.in or the India Today Group. The writers are solely responsible for any claims arising out of the contents of this article.