On his death anniversary, here's why his films remain memorable.

I still recall the rainy morning of August 14, 2011, when I got to hear the news that Shammi Kapoor had passed away. The grief was deeply felt and expressed by talking to my friends and cousins who, along with me, had been staunch admirers and fans of this boisterously vibrant actor who ruled the box office with his incredible energy during the 1960s.

His films had stayed with us since our childhood. And still do.

Six years have passed since he left us, but the way in which his films have kept being a part of my life makes me feel that actors like him can never die. The exuberance and stamina that he maintained on screen will continue to instil joy in the hearts of viewers for all times to come.

In fact, his  spontaneous dancing and  magnetic sensuality made critics underrate him as an actor. This is something I could never agree with. His performances in films such as Professor, Brahmchari and Teesri Manzil remain memorable. I guess the critics and some people in the audience too were so greatly taken up with his looks and attractive personality that they forgot to focus on his acting. 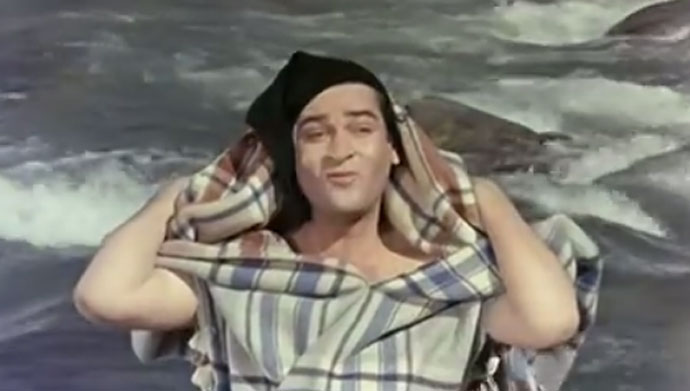 Like Amitabh Bachchan, the star of the millennium, Shammi Kapoor also had many flops before the film, Tumsa Nahin Dekha (1957), that changed everything for this handsome actor the same way Zanjeer did for Big B.

Tumsa Nahin Dekha was released in the same year as the classics Mother India and Naya Daur, and yet Shammi Kapoor made a great mark with this romantic musical film in which he took on an entirely new look and manner of acting.

Often described as a combination of James Dean and Elvis Presley, Shammi  Kapoor had an originality which one saw in his brash swagger and his rebuking of conventions. His film Junglee (1961), with its famous “Yahoo” announced the transition of Hindi cinema from one phase to another.

The "rebel star" had brought a fresh and rejuvenating flavour to the silver screen and could be easily given the title of the “nawab of the box office” in the 1960s. Many of his films were romantic comedies with unforgettable music. Mohammad Rafi's voice added greatly to the irresistible charm of this Kapoor, who called the legendary singer “his voice”.

Like Kishore-da added depth and beauty to the persona of Rajesh Khanna, Rafi-sa’ab did that to Shammi Kapoor's highly magical screen presence.

Kapoor struck the screen with lightning that did not lose its sting throughout his career in the 1960s. We can feel it today when we watch his films. His complicated role in Pagla Kahin Ka was a difficult one to play with the ease we see him doing it with. His flamboyance added to his talent and did not take away from it.

It is often said that he had a hundred suits - 120 shirts and innumerable sweaters. He lived life king size. Women could never resist his charm and personality. He was a romantic hero to the core and projected a beautiful picture of that in films such as Janwar, Brahmchari, Professor and Kashmir ki Kali.

Before Rajesh Khanna, if there was a soft, romantic hero worthy of the name, it was Shammi Kapoor indeed.

I do not think that any other hero of the sixties can take away from Kapoor the credit of being the heart-throb of the swinging sixties. He literally danced to his own tune and never needed a choreographer. As soon as the music played, he would go into a frenzy and create dance moves which perhaps not even the best of choreographers could have come up with. He was nothing if not a born dancer.

When he "sang", “Main Gaoon Tum So Jao” to his adopted children in Brahmchari, he easily made everyone cry with his expressions that matched Rafi Sa’ab’s voice - full of pathos. When he plays the stuck up, over-disciplined character in Junglee, he makes us abhor him for a while. In Professor, he plays the old man as well as his young nephew. This required a versatility which only this good-looking Kapoor could bring to this film that was shot mostly in Darjeeling.

It is one of the most enjoyable films of Shammi Kapoor with songs to die for. “Main Chali, Main Chali, Peeche Peeche Jahaan”, “Aawaz deke hame tum bulao”, “Aye Gulbadan, Aye Gulbadan” - each song was a gem and shines as brightly even today. The songs of his films helped Shammi Kapoor build a screen persona that is simply larger than life and extremely romantic.

The feel of romance he gave to the audiences in that era could be felt even today by anyone who spares some time to watch these beautiful films. Shammi Kapoor even today is nothing less than magic on the screen.

#1960s, #Bollywood, #Shammi Kapoor
The views and opinions expressed in this article are those of the authors and do not necessarily reflect the official policy or position of DailyO.in or the India Today Group. The writers are solely responsible for any claims arising out of the contents of this article.