She died just as she lived: with grace and equanimity.

Veteran art critic Shanta Serbjeet Singh died on August 2 in a sitting position. It is believed that yogis and ascetics die in that position. For decades, she had sat calmly like that and watched and reviewed many dance and film shows.

Educated in Berkeley, art happened to her by chance, just like her marriage to renowned painter Serbjeet Singh, who was known for his love for the Himalayas.

Together, the couple made many films and she was thus "trained" to be a film critic, attending cine festivals from Cannes to Kazakhstan in the 1960s and 70s.

The veteran art reviewer and former vice-chairperson of Sangeet Natak Akademi, Shanta Serbjeet Singh was a regular in art and culture circuits across the country.

She began her career with a dance critique which set a new benchmark for critics. Each of her pieces following that one was so well-written that she almost reminded her readers of her favourite playwright Tom Stoppard - drawing sharp portraits with words nudging the world's pressing issues.

She was associated with the Hindustan Times for long. Before that with the The Economic Times. She also spearheaded the association of Asia Pacific Network (APPAN) for arts linking Kabul with Korea and Singapore with Seychelles, all via India. 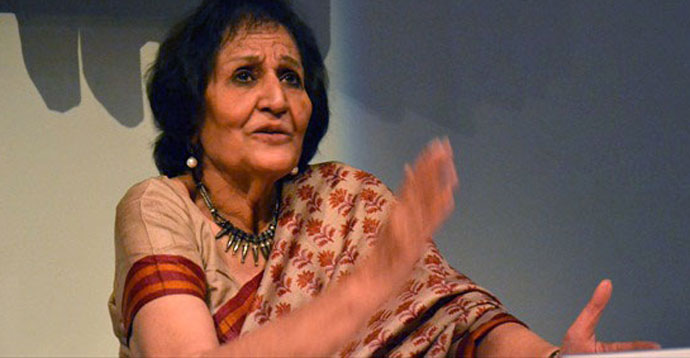 Shanta never ran after awards or recognition and remained a quintessential critic, never judgemental but aware and alert.

"Cultural bureaucracy" was afraid of her while scheming dancers hated her because she used to be member of many committees that dispensed patronage. She believed in propriety and was yet helpful and kind.

Shanta Serbjeet Singh was also a keen observer of human behaviour, watching artists of all shades in action. She knew their frailties and failings. Strengths and spirit.

Indefatigable to the core, she always fought for the right cause. She also wrote three definitive dance books and two on gender issues and women's rights besides thousands of articles on dance, spanning five decades. Their digitisation by the IGNCA would help students of journalism, dance and film studies.

Her activism made her a one-stop point for desperate and disparate people. She headed the Indian Women's Press Corps for many terms as president because they found her irreplaceable. During her tenure as president she even fought and addressed various issues faced by the IWPC, including when authorities wanted to demolish its office since it was housed in a bungalow in Lutyens' Delhi, 5 Windsor Place.

Shanta Serbjeet Singh will be remembered above all for supporting the right causes and talents. Born on January 11, 1936, she was a Capricorn and true to the steadfastness of a goat, surmounted many hurdles to reach the top.

What one can learn from her death is that in the end, what you leave behind is the legacy of your work, your honesty and impartiality - a life devoid of pettiness and politics that surround the art circle.

Strangely, no Padma award or any such honour came her way even though she canvassed and pushed for many deserving names, because she would never ask anything for herself.

She made one last trip to her house in Dalhousie recently, meeting over 400 villagers, as if taking their leave. Then she came back to Delhi to her favourite people - sons Karamjeet (and his wife Neeru) and Vishwajeet, who along with nurse Shamoli looked after her lovingly.

Shanta died just as she lived: with grace and equanimity. A smile adorning her face, as though saying: I'm watching over you all.

#Critique, #Dance, #Art, #Shanta Serbjeet Singh
The views and opinions expressed in this article are those of the authors and do not necessarily reflect the official policy or position of DailyO.in or the India Today Group. The writers are solely responsible for any claims arising out of the contents of this article.