Toilet: Ek Prem Katha is not a complete disaster

It was confusing and disturbing to discover that the first half of the film is all about successfully stalking and demeaning women.

A 37-year-old uncle follows a woman who is in her early 20s, he records videos of her without her permission and even saves his number on her phone under the name "apka fan" when she accidentally leaves the device by his side.

This uncle is our hero "Keshav" played by Akshay Kumar and the woman is "Jaya" (Bhumi Pednekar). Intuition, common sense and the law of the land would identify Keshav as a scary stalker who should be behind bars, but in a Hindi film, Keshav is obviously a potential husband.

For a film that pretends to be aimed at social change with the issue of women's safety at its core, it was quite confusing and disturbing to discover that the first half of Toilet: Ek Prem Katha is all about successfully stalking and demeaning women.

Keshav ultimately wins over Jaya and marries his district-topper wife after much difficulty. This man is an expert at "jugaad" he finds quick fix solutions to difficult problems such as pasting a fake thumb on Jaya's hand as his father wants a two-thumbed girl for his manglik boy.

Just like Keshav, the team of Toilet: Ek Prem Katha seems to believe that they have the licence to jugaad just because their film deals with a deeply important issue.

Jaya realises that Keshav does not have a toilet in his house and goes back to her parents after every one of Keshav's jugaads and attempts at building a toilet fail.

Keshav is heartbroken, he spends most of his time delivering lectures on gender equality and protecting women by providing them proper lavatories. I can understand that the degree of difficulty on this particular film must have been high but you can't flood a script with offensive humor for commercial viability especially when you are dealing with an issue such as open defecation. Soon after Keshav and Jaya tie the knot Keshav's father says "Mangal ho" and Keshav's friend responds by saying "Ab to bhai dangal karega", basically he tells Jaya that Keshav is going to rock her all night long in front of all the baraatis.

Then the stalker-turned-groom whom Jaya wakes up at around 4am following their wedding night says "Teen baar utha chuki ho, main bhi insan hoon" this is a rehashed version of a dialogue Akshay Kumar used in 2004's Khakee where he said "Kya kar rahi ho, raat bhar sone nahi dia, aadmi hoon machine nahi". 13 years on, he using the same stale jokes and he is the only one laughing.

Then comes the mother of all disturbing failed attempts at humour: Jaya is speaking to her grandfather over the phone who says "raat ko soyi nahi hogi theek se (yes, her grandfather too)". The same grandfather played by Anupam Kher asks Keshav to choose between Sunny Leone and Mallika Sherawat during his marriage interview.

This is the level of the humour in this film, which is supposedly aimed at reform and fighting a regressive mindset. 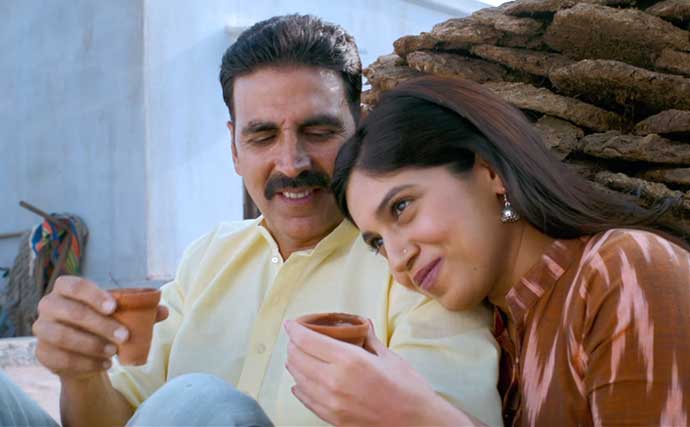 This man is an expert at "jugaad" he finds quick fix solutions to difficult problems such as pasting a fake thumb on Jaya's hand as his father wants a two-thumbed girl for his manglik boy.

The effective jokes in Toilet: Ek Prem Katha, if summed up, are less than the amount of spittle that flies out of Akshay's mouth every time he delivers an angry monologue, no Akshay - don't "angry" yourself.

The direction is amateurish and the film seems more like a street play. Things take a serious turn in the second half and both Akshay and Bhumi deliver convincing performances.

Important information is on full display and that is the only reason why this film is not a complete disaster.

However dialogues such as "Jab humare pradhan mantri desh ki bhalai ke lie notebandi kara sakte hain to..." can only contribute to propaganda, not cinema and certainly not change.

I am extremely disappointed but I am going with two out five for Toilet: Ek Prem Katha simply because this film deserves to be seen for its overall message.

#Bhumi Pednekar, #Akshay kumar, #Toilet Ek Prem Katha
The views and opinions expressed in this article are those of the authors and do not necessarily reflect the official policy or position of DailyO.in or the India Today Group. The writers are solely responsible for any claims arising out of the contents of this article.