Wherein lies continue: An antidote to emptiness via canvases full of memories

Sunil Padwal exhibited his solo work last month prior to the Art Fair. For him, objects, from an old radio to clothes hangers, evoke fleeting memories, emotions and worlds we once inhabited.

It is a scribble on a wall in pencil. Grey and unassuming.

"Wherein lies continue," the artist wrote on a wall at Gallery Ske's Booth at the India Art Fair 2019 edition.

On the other wall, there are the characteristic empty drawers, hand drawings, old radios and a typewriter arranged in a collage. We tell ourselves we can reclaim the past. This is how we continue with the lies.

An old radio can never play those songs again. The air waves are lost.

A lost object, a found emotion and in-between, a great emptiness.

That's how the artist creates a lost world.

Only if you belonged to both the worlds, you'd know that in-between lies that great void. Like a barber's chair, and the forgotten newsprint reimagined on canvas. Things he saw then and stumbles upon in odd places in the city and brings them to his studio to make an archive.

The broken chair that was fixed is how life works, where we are always repairing our broken selves to keep the void at bay, the artist says. These canvases contain letters you wrote, words you could never articulate, says Mumbai-based artist Sunil Padwal. 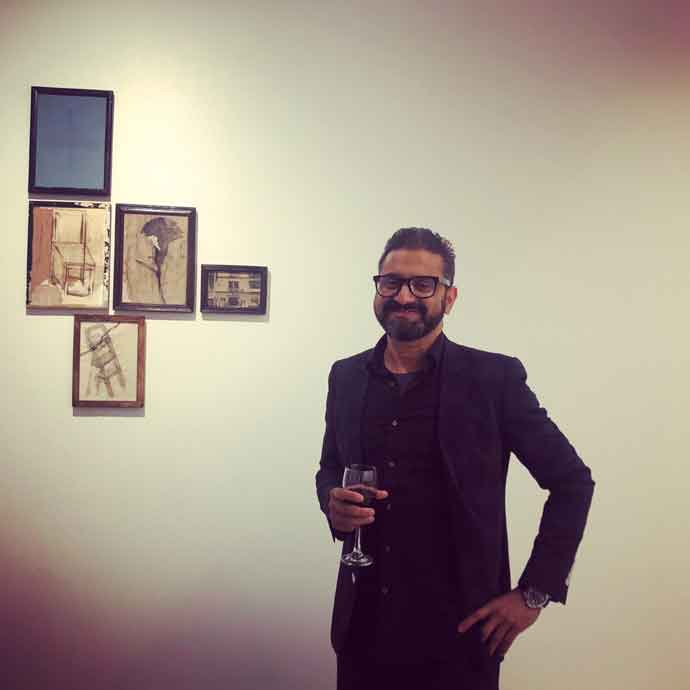 For Sunil Padwal, the hardware parts, the typewriter and other objects are an archive of lost worlds. (Photo: Chinki Sinha)

He creates an antidote to that emptiness on canvases full of memories and lines that elongate the past for his solo show that opened at Gallery Ske in New Delhi last month, prior to the Art Fair.

Almost empty drawers line the walls, a hanger indicates the absence of clothes in this collection of found objects redrawn, recreated and reassembled to make an archive of longings.

There is a cabinet with old photographs and other everyday objects to resemble a kiosk of storytelling. The functionality of everyday objects used by the artist is altered to elevate them to triggers for memory and that pervasive nostalgia for a world lost, like the mills of Mumbai.

In a way, it is like time travel where some of these objects belong to a different time and space, and like many things, have been discarded. When you encounter them in this space, they call for a participation from your end to call upon your own memories.

Padwal believes in abstraction, but when you begin to view the objects in a context of his emphasis on emptiness, you hit upon a lyrical note of longing for what is now only a fleeting memory of a humble middle-class life manifesting itself in the objects.

Like a song you don't remember — but you recall the emotion.

"Someone else has touched them and we wanted to elongate that line of memory," he says. "The moment you use it in the gallery, the functionally is twisted. The drawings are all about present and past and how the past is governing my present. There is a certain emotion, I didn't know how to articulate the emotion. I let the line be."

For Padwal, the hardware parts, the typewriter and the rest are an archive.

"A broken chair is a work of art. When I add my elements, I am putting my own emotions. If I am reading news or a poem, it makes its way into these canvases," he says. A lost object, a found emotion and in-between, an emptiness. That's how the artist creates a lost world. (Photo: Chinki Sinha)

There is a canvas of a front page of The Times of India in 1922. The artist is playing on the fact that time tells different story.

A photo of a mill compound where there is an empty bed look like a stage where emptiness is the protagonist.

"Nobody stopped to looked at it," he says.

There is an interplay of the visible and the invisible in the tactile universe of an urban life, full of chaos and transformations of the self and the objects around you.

"I used to draw in school and college, and after trying different art mediums revisited drawings in 2004. The content of the drawings was different, but over the years I've tried to create my own vocabulary, distinctive imagery developed through drawings. Urban reality blends into an abstract world, the line drawings are a mirror of my overlapping thoughts which eventually transcends into interesting forms. The line plays an integral role in creating a new form, as complex and intricate as the varied thoughts," he says.

Padwal grew up in the dense and congested lanes and alleys of South Mumbai in the 1980s and says he formed a deep connection to the streets and the objects, machines, animals and social dramas that unfolded in these lanes.

"My understanding of the modern city as a play of uncertainty and illusion is grounded in these street experiences. The emotional pull of these experiences is felt through the pressure of the objects — found and collected through innumerable forays into the streets and markets of the city, captured in photographs, covered in fine lines drawn by hand," he adds.

And to walk around this space is to confront your own void.

Perhaps that's what art is.

A free verse. An exercise of poetic license to provoke and evoke memories of lost time, an encounter with stories that are composed by the artist and complemented by the viewer.

Also read: An old woman who sings of hope, and lives like a free bird

Post your comment
#New Delhi, #India Art Fair, #Gallery ske, #Sunil padwal
The views and opinions expressed in this article are those of the authors and do not necessarily reflect the official policy or position of DailyO.in or the India Today Group. The writers are solely responsible for any claims arising out of the contents of this article.