In an age when filmmakers are turning to subtlety and seeking global critical acclaim, Shetty rejoices in ribald Bollywood tropes and OTT comedy.

Rohit Shetty is Bollywood's resident Spice Boy. Forty-four years old and enviably successful, his films are retro-infused entertainment packages that are strictly made for the masses. His contemporaries are discarding age-old set pieces and tropes to incorporate subtlety in their movies — but Shetty doesn't care. He is doing just fine. 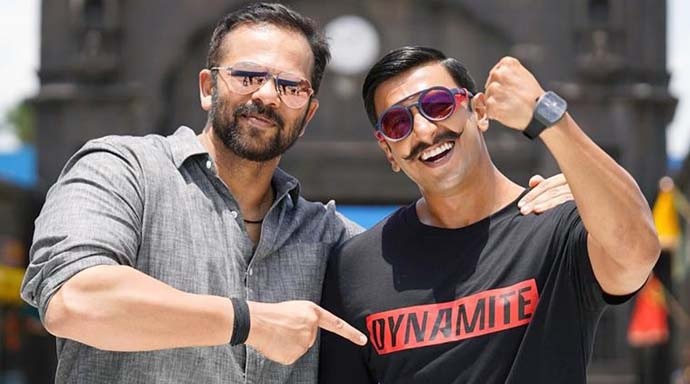 He's got his finger on the pop pulse. (Photo: Instagram)

Son of the late stuntman, actor and action choreographer MB Shetty, he had once said during an interview with me that critics' views do not matter to him. The filmmaker's target audience is that average film-goer seeking a fun-filled break from daily pressures by sipping a cocktail that blends action, comedy and romance. And his hit-studded filmography shows he is one of the best barmen in town.

Shetty's start was everything but spectacular. After taking his first step towards direction by assisting Kuku Kohli in Ajay Devgn's debut film Phool Aur Kaante (1991), he helmed his first film, Zameen, in 2003. An action drama starring Devgn and Abhishek Bachchan, Zameen, was an unremarkable film that did average business.

The real Rohit Shetty would emerge a few years later.

Fifteen years later, he is navigating the ship of two successful franchises, Golmaal and Singham. Simmba, his much-awaited upcoming film, is a reboot of the Singham series. The protagonist (Ranveer Singh) is hot property, and newcomer Sara Ali Khan seems a star with a fine future. Their coming together has raised expectations, guaranteeing a great first day. But Shetty knows how to capitalise on past successes, which is why Simmba is not a surprise. In the film, Singh's character idolises Bajirao Singham, the cop-protagonist of the first two films, Singham (2011) and Singham Returns (2014), played by Shetty's old associate Devgn. But while Bajirao Singham is an honest Maratha cop, Simmba relishes the fruits of corruption guiltlessly after joining the police.

Explaining in the trailer why he has joined the profession, he yells, "Main policewala bana paisa bananey ko, Robin Hood bankey dusrey ka madad karney key liye nahi"(I have become a cop to make illegal money, and not to become Robin Hood and help others).

He mends his ways and confronts evil after events around him have a serious impact on him. Of course, Singham himself makes an appearance and the evil is presumably eclipsed just before the film ends. 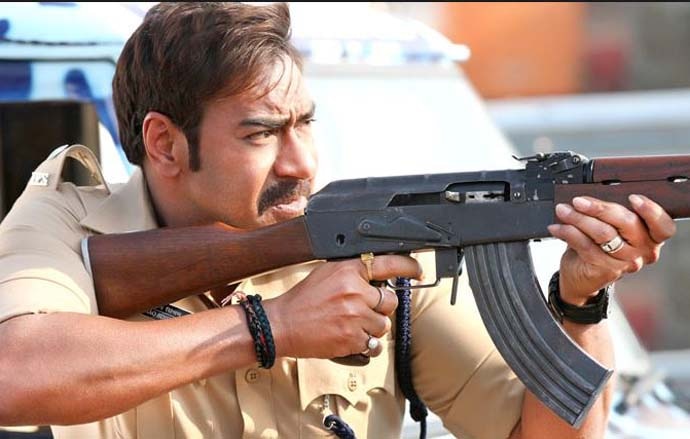 A shrewd marketer of clichés that his typical fan finds irresistible, Shetty's approach to filmmaking reveals his understanding of the viewer's expectations. Consider Dilwale (2015), which brought Shah Rukh Khan and Kajol together. The film was just another masala flick in which he used all the standard devices he is known for — romance, in-your-face comedy, fights and vehicles in action included.

Dilwale was a mediocre performer domestically — but it more than made up for the disappointment at home by faring remarkably overseas. Produced at a reported budget of Rs 110 crore, it grossed Rs 408 crore worldwide. SRK's biggest grosser overseas, the film became a highly profitable venture. Shetty makes this happen in film after film. How does he do it?

He or his writers come up with interesting names for his films' characters. These names are relatable, which injects humour in the proceedings. All The Best: Fun Begins (2009), a money-making venture without being a blockbuster, has two Kapoor brothers (Sanjay Dutt and Fardeen Khan). One of them is named Dharam, the other Veer. Devgn's character in the same film responds to Prem Chopra — which is even funnier.

Golmaal Returns (2008) has a non-existent character named Anthony Gonsalves — a tribute to Amitabh Bachchan's character in Manmohan Desai's comic epic Amar Akbar Anthony (1977). The name is difficult to forget, even though it is hardly original.

Inspired by the masala mixes of the '70s and '80s, Shetty is sure that the average viewer likes retro-fitted cinema despite the zeitgeist of our times. He is lucky to work in an era when spending Rs 100 crore to make a film is normal. It sounds unreal when seen in the context of Ghajini, which became the first film to touch the Rs 100-crore mark in the domestic box-office — that happened merely ten years earlier.Flexibility offered by a substantial budget has allowed him to access the benefits of technology freely.

But what has remained unchanged since he started out is the soul of his cinema — it is as old-fashioned as ever.

His comedies are high on slapstick and unsubtle jokes. Even if one keeps his references to other films aside for a moment, it is easy to see that he is inspired by old over-the-top comedies that made millions gravitate to the theatres in the '70s and '80s.

Who can forget the Jeetendra-Sridevi-Jaya Prada series of South Indian Hindi films? Decades after their disappearance from the theatres, we remember these films for Jeetendra's 'Jumping Jack' acts in garishly choreographed dances, dollops of melodrama, Kader Khan and Shakti Kapoor's low-brow comic tracks and utterly senseless stories. Still, these films made viewers queue up in front of the ticket counters. A young Shetty must have been one of them. Shetty doesn't like anything high-brow either. Character actors like Johnny Lever, Vrajesh Hirjee and Sanjay Mishra are permanent fixtures in comic tracks. Their performances have played a significant role in scripting the success story of the Golmaal franchise.

Tusshar Kapoor as the mute character, Lucky, makes the viewer laugh whenever he attempts to express himself with desperate noises and strange facial expressions. Lucky's depiction shows that Shetty has no interest in toeing the line of political correctness. What works for the viewer works for him.

Shetty is known to seek inspiration from films and plays. His choice of comic stories shows his liking for illogicality, confusion and multiple subplots. The stories tell the story. Golmaal: Fun Unlimited (2006), the first film of the franchise, introduces Gopal (Devgn), Madhav (Arshad Warsi), Lucky and Laxman (Sharman Joshi). These four mischievous characters seek shelter in the house of a visually challenged couple. They are waiting for their grandson, who will inherit an ancestral treasure chest. What follows is utter chaos.

Golmaal Again (2017) is a supernatural comedy. The story of the experience of a woman who sees, and interacts with ghosts, the film takes the viewer inside a haunted house. It is the best film of the franchise, largely because of its well-structured central plot. From the moment the men meet a female ghost and until she leaves for heaven, the story progresses smoothly without many absurd digressions.

One must be forgiven for laughing uncontrollably when Gopal, who has fallen in love with the woman/ghost half his age, watches Yash Chopra's Lamhe to legitimise his feelings for her. It is a genuinely well-written moment, but not too common in Shetty comedies that reveal the director's faith in farcical humour.

Devgn is far better in serious roles. Shetty has, however, brought out his comic side in film after film. In Bol Bachchan, the actor plays a toughie who detests lies. He deadpans weird one-liners like 'Hard work is the keyhole to saxophone.' When Bachchan as Bachchan starts dancing to 'Dola Re' spiritedly, it is easy to understand why Bol Bachchan works — it is a classic case of uninhibited filmmaking, an instance of the director's ability to find and entertain his fan viewer.

The two films of the Singham franchise manifest a different Rohit Shetty. His protagonist Bajirao Singham is a tough, honest cop from Shivgad, a hamlet on the Goa-Maharashtra border. Physically powerful and purposeful, he is a modern-day Angry Young Man and a vigilante in khaki. The villains, played by Prakash Raaj in the first part and Amole Gupte in the second, are powerful men, supported by an army of cronies. But Singham deals with the evil in his inimitable style. He is the saviour who conquers the beast.

The owner of several expensive cars in his personal life, it is an irony that most fancy four-wheelers turn into punching bags in Shetty's films. In the Singham films too, cars burn, explode and get slammed into. Impossibly one-sided action sequences include anti-gravity fights. Dialogues that play to the gallery are in plenty, including the pop classic 'Ata maazi satakli kaa'. Both the films are perfect retro packages that action film buffs simply adore.

Singham has references to cop films like Dabangg, Devgn's own Gangaajal and Zanjeer.

Chennai Express (2013) stars Shah Rukh Khan as a North Indian man, Rahul, opposite Deepika Padukone who plays Meena, a girl from the South. The film's opening sequence shows Meena chasing a running train. Rahul, a passenger on the train, extends his hand to help her board it. 'Tujhe dekha toh yeh jaana sanam's instrumental version plays in the background. The sequence with the DDLJ connection is also the most memorable one in Chennai Express. Shetty is thus a prolific filmmaker. Most filmmakers though seek critical acclaim. Not he. The director enjoys making big-budget, larger-than-life films. He is equally comfortable directing comedies and action films in his signature uncomplicated style. Guided by instinct, powered by motivation, he is that rare filmmaker who knows how to read his viewer's mind.

Post your comment
#Bollywood, #Sara ali khan, #Ranveer Singh, #Simmba
The views and opinions expressed in this article are those of the authors and do not necessarily reflect the official policy or position of DailyO.in or the India Today Group. The writers are solely responsible for any claims arising out of the contents of this article.