Why Shekhar Kapur's Will is just wow

London ends up being the real star of the series with its circus artists, prostitutes, actors all put into one multicultural hotchpotch.

Here is William Shakespeare, a bright-eyed, bushy-tailed glovemaker, recently arrived in grimy London with its stinking sewers, starving prostitutes, orphans with bad teeth, and mysterious Catholic hunters. Himself a Catholic, with a wife and three children in Stratford, he has a burning desire to become someone – is it a sin, he asks, to be who I want to be. Not so much now, but certainly in class-obsessed Elizabethan England. Kapur reimagined Elizabeth, through the exceptionally talented Cate Blanchett, as a modern politician who outwitted all the men who sought to please her or impress her. Here, he and Pearce reinvent William Shakespeare as an 80s rock star, with Christopher Marlowe (played with languid charm by Jamie Campbell Bower, complete with some very contemporary tattoos) as his great frenemy.

Yes, Shakespeare in Love has been there, done that, but Kapur brings to the series a manic energy that newbie Laurie Davidson taps into well. The theatre world is alive and well, with James Burbage and Philip Henslowe duelling each other for audiences.

Great actors William Kemp and the rising star, Richard Burbage, have the difficult task of keeping the hungry and thirsty people occupied. Everyone seems kitted out in Manish Arora costumes which you want to buy off the screen right away (and perhaps dry clean them before wearing, given that they are authentically stained), and wear face colours more suited to a football match. 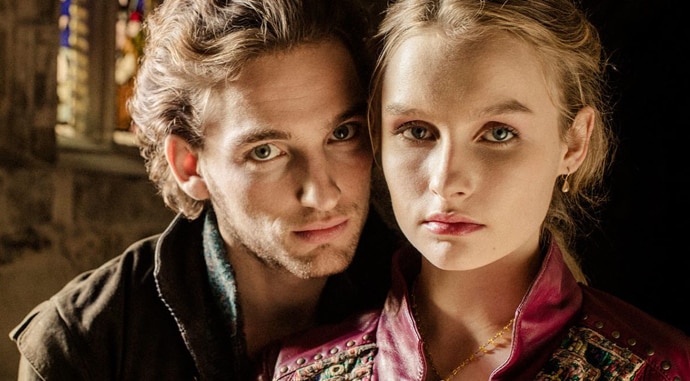 Sure there is little about the series that is subtle, but it is loud and overstated in the most enjoyable way. Alice Burbage, who befriends Will, is a tough little feminist, dressing up as a boy to be out and about drinking with the lads.

"I am the most useless of all creatures,'' she says, "an educated woman. It seems we are good only for ruling the kingdom, having babies and whoring." The audience at the theatres is interested merely in a spectacle, the flashier the better (and by flashing, I do mean, flashing of considerable amounts of naked butts and decorated penises).

Religious persecution is rampant with graphic scenes of entrails being disembowelled and the earliest form of waterboarding being practiced. Individual ambition is being recognised, and feudal privilege is starting to be disdained. And ah yes, the English language is freed of its stiff cravats and tight corsets and is allowed to breathe – you can't just make up words, Baxter says to Shakespeare, when he reads the word bedazzled.

"Someone must,'' says young Will. He may be poorly read, as he is often reminded by the classicists, but he is quick of wit and light of spirit. He is also, as played by Davidson, an instant hearthrob, all fluttering long eyelashes and high cheekbones. But the real star of the series is London, with its circus artists, prostitutes, actors, carpenters, fishmongers in one multicultural hotchpotch. There are Blacks, Arabs, Indians, all seemingly having stepped off the (albeit whiter) sets of the equally boisterous Harlots, recently on ITV.

Who are you, someone asks Will. No one, he says. Well, no one yet. He bustles about the city with a notepad writing down things as he hears them – get thee to a nunnery, says someone; live fast, die young, says another. And be forever famous. Two episodes down, can't wait to watch more. Welcome back, Shekhar Kapur, You're forgiven for having not made Paani.

#London, #TV series, #William Shakespeare, #Shekhar Kapur
The views and opinions expressed in this article are those of the authors and do not necessarily reflect the official policy or position of DailyO.in or the India Today Group. The writers are solely responsible for any claims arising out of the contents of this article.