The move will end up becoming another burden on the public as the government has limited sources of raising money.

The Union government's bank recapitalisation plan is a surprising development since no one expected the Centre to come up with the move at a time when the economy is still reeling under the impact of demonetisation.

Its justification for the decision is that it would create employment and increase liquidity in the system. The move is open admission of the fact that all other celebrated reforms of the government are failing. However, recapitalisation of banks is not a new or innovative initiative. For instance, Rs 1,18,724 crore was infused into public sector banks from 2008-09 to 2016-17. The Indradhanush Plan declared in August 2015 alone infused Rs 70,000 crore from 2015-16 to 2018-19 into the banks. Interestingly, there has been no assessment of the effectiveness of these investments in employment generation.

In the latest attempt, the ministry of finance wants to raise Rs 2.11 trillion for the recapitalisation of banks. The Centre believes this project will ensure more funds for investments.

It could be an effective intervention only if the money invested in banks results in increased liquidity in the markets and helps in employment generation in sectors that need more labour.

Table 1 makes it clear that employment elasticity in the country has been declining since 1972. The decline has been more aggressive in the liberalisation era. Any new capital investments towards spurring economic growth should be made keeping in mind this reality.

Table 2 shows that the utilities and construction sector have shown higher employment elasticity over a period of time. The success of recapitalisaiton depends on how it increases the employment elasticity and it can't be done by the private sector alone.

Source of recapitalisation funds and challenges for the public

Of the Rs 2.11-lakh crore recapitalisaiton funds, Rs 1.35-lakh crore would be collected through issuing recapitalisation bonds and the remaining Rs 76,000 crore will be spent by the government.

The government has asked Reserve Bank of India (RBI) for a special dividend for the recapitalisation expenditure. But this is easier said than done.

Supporting the recapitalisation move, RBI governor Urjit Patel said: "A well-capitalised banking, and in general, financial intermediation, system is a pre-requisite for stable economic growth. Economic history has shown us repeatedly that it is only healthy banks that lend to healthy firms and borrowers, creating a virtuous cycle of investment and job creation. The government of India's decisive package to restore the health of the Indian banking system is in the view of the Reserve Bank of India (RBI), a monumental step forward in safeguarding the country's economic future."

Though the RBI governor has endorsed the recapitalisation policy, the central bank's employees' union has raised objections. Their objection is based on the fact that the RBI had to reduce the surplus paid to the government owing to the financial burden.

The union considers this to be an additional burden and also suspects the move to be an attempt to use the RBI for short-term political gains. The union's argument is valid in the context that the government has undermined the institutional importance of the RBI in regulating currency flow in the economy.

The success of recapitalisation depends on the Indian bond market. The government is confident that it will be able to raise capital through the bond market.

In India, 30.4 per cent of the GDP comes from government bonds and only 13 per cent is through corporate bonds; the latter constitute just 30 per cent of the total bond market in India — which is still dominated by the government and is a critical source of income for it since it carries the burden of paying dividend.

The government has to ensure the dividend is paid and hence investments have to be prioritised accordingly. Such prioritising may not necessarily generate employment opportunities. The proposed borrowing would increase the debt to GDP ratio which is against the policies of the post-liberalisation government.

The Fiscal Responsibility And Budget Management ACT, 2003 restricts the government from borrowing more than two per cent of the GDP. The graph below shows the trend the government debt-to-GDP ratio has followed over a period of time. 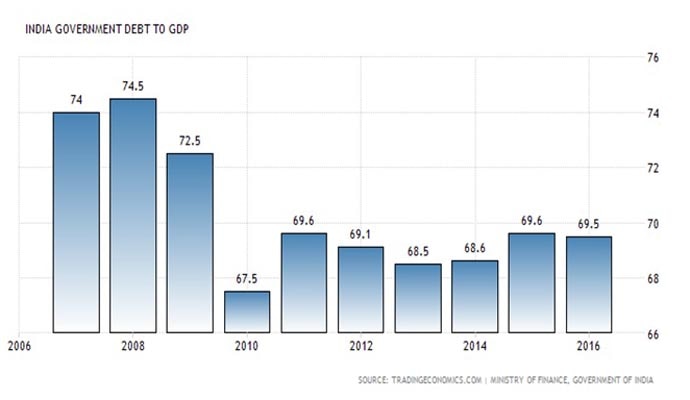 So while the proposed recapitalisation will increase capital support for the private sector, there is no guarantee that it would increase the rate of employment too.

It will thus end up becoming another burden on the public.

Post your comment
#Urjit Patel, #Indian Economy, #Demonetisation, #Bank recapitalisation
The views and opinions expressed in this article are those of the authors and do not necessarily reflect the official policy or position of DailyO.in or the India Today Group. The writers are solely responsible for any claims arising out of the contents of this article.

The writer is an Assistant Professor at Jamsetji Tata School of Disaster Studies, Tata Institute of Social Sciences, Mumbai.