How BRICS' New Development Bank can be a model institution

NDB is positioning its credibility as an organisation to support sustainable infrastructure rather than eradicating poverty.

With this backdrop, has the NDB been institutionalised as a model multilateral development institution for lending development finance? As India presided over the 8th summit, can "Sabka saath, Sabka vikas" which translates as "Together with all, Development for all" slogan of Modi government be infused in letter and spirit to the NDB operations?

Since its inception in 2014, the NDB, like BRICS, has been receiving half-baked criticism from western commentators, civil society groups and sympathisers of Siamese twins, World Bank and IMF, and Manila-based Asian Development Bank (ADB) and their cohorts in Global South, including in India.

Major criticisms hurled at the newly-formed NDB are primarily on efficiency of processing and implementing infrastructure projects, absence of stringent environmental standards, lenient to corporates, hand in glove with World Bank, and an overall absence of space for civil society engagement and so on.

While the concerns raised are important, it is too premature asking a two-year-old institution — "young Multilateral Development Bank (MDB)", according to NDB president KV Kamath — to deliver on those grounds, where other similar MDBs have taken several decades to deliver, but have not yet been successful as well.

Had the World Bank or ADB lent their first loan projects for the protection of environment? The answer is no. The ADB extended a technical assistance loan project to Indonesia in 1960s, and the World Bank (it was earlier called International Bank for Reconstruction and Development) gave first four loans to European countries for post-war reconstruction in 1940s.

On the other hand, the Board of NDB approved the first set of projects worth US $811 million for renewable energy projects — one each in Brazil, India, China and South Africa — and a separate $100 million project for Russia, later. 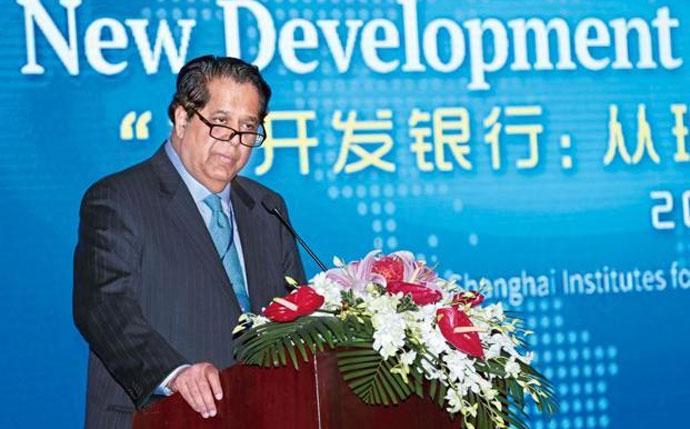 With these renewable projects, the NDB is positioning its credibility as an institution to "support green and sustainable infrastructure" rather than "eradicating poverty" as espoused by the World Bank and ADB. Out of US $250 million loan to Canara Bank, the first installment of $75 million was given for projects generating 500MW additional renewable energy capacity.

The NDB has not been set up to counter Western donors' dominated MDBs such as World Bank, European Bank for Reconstruction and Development (EBRD) and ADB. Rather, like Asian Infrastructure Investment Bank (AIIB), the NDB aims to get rid of financing bottlenecks facing many Asian, African and South American countries and to make nations resilient against global economic shocks.

In 2015, the examples were fresh elsewhere, as was visible in the logjams that cornered Greece and Argentina. While performing a shock absorber's role, with the AIIB, NDB actually aims to dismantle the post-war US-led economic order.

Precisely, the NDB’s objective is mobilising resources for infrastructure and sustainable development projects in BRICS member countries, other emerging economies and developing countries. India, China and Brazil, among BRICS, are aware of constraints and challenges in receiving funds from MDBs for massive infrastructure development.

In addition, a huge gap is prevailing between the required finance and its access. Presently, funds from MDBs with their patron donor countries' aids and developing countries’ domestic resources are lagging behind to fulfill the ever-growing gap of investment requirements in various sectors in Asia only. It is estimated that Asia needs $7.9 trillion in the infrastructure sector alone. Thus, the NDB has to prepare itself to address these challenges by complimenting and supplementing existing MDBs, including the AIIB.

Likewise, neither World Bank nor ADB had first adopted robust institutional or operational policies in their first year of operations. The Environmental and Social Framework (ESF) of NDB was approved in March 2016 which allows respective country policies as priority to govern the loan projects. While it is propagated that the ESF was approved without CSO consultation, it should be acknowledged that the NDB would be the first MDB which categorically mentions protection of "human rights" in its ESF.

"70 years is not enough" for World Bank, and "50 years is not enough for ADB" to consider "human rights" in their core institutional documents so far (World Bank was established in 1944 and ADB in 1966). The ESF, being a framework, would guide the NDB to prepare further specific environmental, displacement, indigenous and gender policies for minimising the impacts of infrastructure projects. There is an interim information communication policy already existing with NDB which enables access to information.

The NDB African Regional Centre in South Africa is emerging as a hub for pumping development finances to the need of African countries. Simultaneously, as BRICS met BIMSTEC in Goa, the NDB may consider lending projects to Bangladesh, Myanmar (Burma), Sri Lanka in the near future. The indication speaks loud and clear that NDB is poised to becoming a global lender as and with AIIB where China, India and Russia are the major shareholders.

The NDB has such a potential that Southern model MDBs should be encouraged. The NDB can draw lessons of the last 70 years of grave mistakes done by MDBs.

Notwithstanding premature criticism hurled at the NDB, it's success lies in the fact that the institute is a unique platform of discussion, debate and dialogue on issues close to the three continents — Asia, Africa and South America — the continents of exploitation. In Kamath’s own words, “We will listen, we will learn, we will innovate, we will collaborate and we will contribute."

#World Bank, #New Development Bank, #BRICS
The views and opinions expressed in this article are those of the authors and do not necessarily reflect the official policy or position of DailyO.in or the India Today Group. The writers are solely responsible for any claims arising out of the contents of this article.