The Finance Minister has been commended by experts, business houses and the media for presenting a growth-stimulating budget which has a large scope for expansion of public health capabilities.

Union Budget 2021-22 has done a balancing act in reviving the economy and stepping up public investment on health and other social infrastructure programmes — a gargantuan task at a time when the economy is ravaged by the Covid pandemic. The Finance Minister has been commended by experts, business houses and the media for presenting a growth-stimulating budget which has a large scope for expansion of public health capabilities. This piece takes you through the health budget allocations and present whether this is adequate and justified in a pandemic year, which necessarily calls for higher investment in health. Under-spending on health has been a perpetual problem in India and the share of government expenditure in GDP is one of the lowest compared to countries with a similar level of per capita income. With public spending of just 1.2 per cent of the GDP and high Out Of Pocket Expenditure (OOPE) at 63 per cent of current health expenditure, India compares disproportionately not only with many Asian countries, but with the average of low middle-income countries (see figure below).

For instance, our OOPE is substantially more than that of Sri Lanka, China, Thailand and Indonesia. Evidence suggests that 32.5 to 37 million people are pushed into poverty in India due to high Out Of Pocket Expenditure while accessing healthcare, and the single largest cause of high OOPE is the expenditure on medicine. Budget 2021-22 has given an adequate emphasis on health and wellbeing, one of the six pillars of achieving growth and working towards seeing an Aatmanirbhar Bharat. Health and wellbeing, comprising nutrition, drinking water and sanitation, witnessed a quantum jump in allocations from Rs 94,452 crore in 2020-21 BE to Rs 2,23,846 crore in 2021-22 BE, a whopping rise of 137 per cent. However, a major share of the whole amount is for drinking water supply and sanitation, constituting around 43 per cent of the total health and wellbeing allocations, health at 40 per cent including the grant from the finance commission, and 15.64 per cent for a vaccine.

Budgetary provisions for the vaccination programme are Rs 35,000 crore, and this is the need of the hour to kickstart the economy.

Perhaps this budget underscores the importance of sanitation, drinking water and nutrition, which are crucial determinants of health, and health outcomes cannot be achieved by taking action on the health sector only. Therefore, allocations to nutrition assume significance in this year when nutritional indicators indicate stunting — height for age, and wasting, weight for height — declined in most of the prosperous states of India, as revealed by NFHS V.

On the contrary, there has been a decline of Rs 1,000 crore in the nutrition budget compared to the last year's BE. However, the FM announced Mission Poshan 2.0, integrating some of the existing nutritional programmes, and it is too early to comment on it, given that the implementation architecture is not defined. 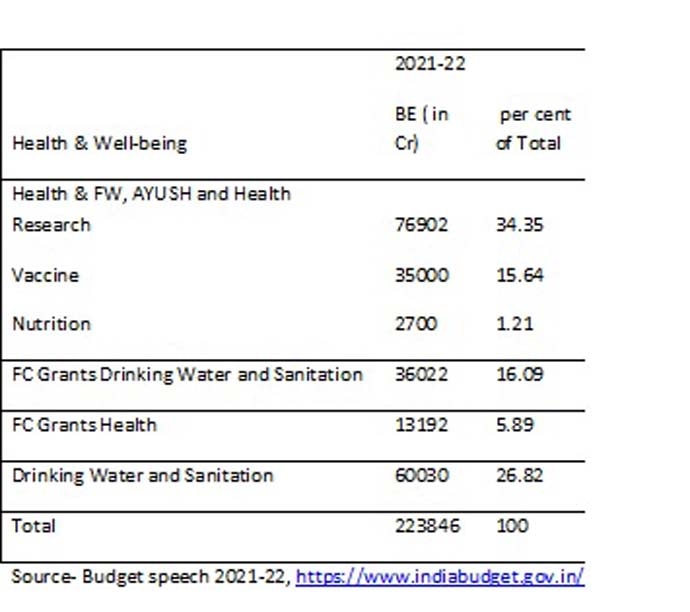 Covid-19 exposed the weakness of public health systems. Any state — rich or poor — was in a predicament, caused by the virus during the peak of the pandemic. A harsh reality that Covid has shown us is that if we do not invest more in basic healthcare, surveillance systems and public health functions, the damage would be enormous.

Given such high expectations, in 2021-22 BE, the Finance Minister has provisioned Rs 76,901 crore for the Department of Health And Family Welfare, Health Research and AYUSH together, which is just 2.21 per cent of total government expenditure. Even if health budget saw an 11 per cent hike compared to the previous year’s budget estimate (which is the highest increment in the last four years), its share in total government expenditure has not improved. Furthermore, intra-allocation shows Rs 71,268 crore for health and family welfare department (nine per cent rise from the last budget) and approximately Rs 2,970 crore for AYUSH and Rs 2,663 crore for the health research department. Leaving aside vaccine (which is an emergency requirement), developing primary care including primary prevention, promotion and basic curative care require additional budgetary support.

Some direction on this front can be seen under PM Aatmanirbhar Swasth Bharat Yojana, where an array of measures — support to rural and urban health and wellness centres, setting up public health labs, operationalisation of public health units — have been intended to strengthen primary care and promote public health activities. A budgetary provision of Rs 64,180 crore is made for this Yojana, for a period of six years.  It is not clear how much is available for this year. Moreover, this is declared as a Centre-sponsored scheme where the states are required to provide their share of resources. As state finances are not in the right shape in a pandemic year, there could be some degree of uncertainties for states to put additional resources for these programmes.

Expenditure on Health and Family welfare, AYUSH and Health Research 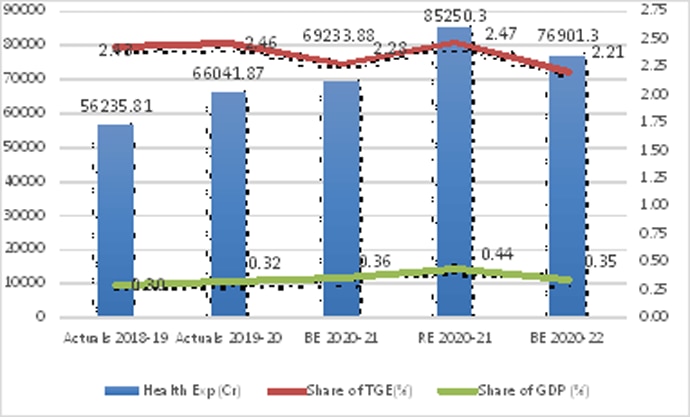 Experiences from Asian countries like China, Thailand, Indonesia and Malaysia support this argument. For instance, the share of government expenditure in GDP in the above-mentioned countries are within the range of 2-3 per cent and this results in OOPE within the range of 35 to 36 per cent. The budgetary provision for health (including Health and Family Welfare, Research and AYUSH Ministry) has not increased substantially to achieve the target set in the economic survey. The share of the Union health department in GDP is abysmally low, at 0.35 per cent as per the 2021-22 BE.

Finally, this budget recognises the role of broader social determinants of health, which provide favourable conditions for improving the health status of people and public health systems, and are equally important in reducing OOPE.

#Covid-19 pandemic, #Public health system, #Healthcare, #Budget2021
The views and opinions expressed in this article are those of the authors and do not necessarily reflect the official policy or position of DailyO.in or the India Today Group. The writers are solely responsible for any claims arising out of the contents of this article.