With interest rates slashed, huge accretion of bank deposits is not an outcome to rejoice politically and certainly not economically.

Attorney general Mukul Rohatgi may have reportedly claimed in Supreme Court that the government expects to collect Rs 10 lakh crore deposits by demonetisation exercise. However, insofar as facts are concerned, there is no reason to rejoice, instead bulging deposits ring alarm bell for the government.

If indeed the attorney general’s estimate comes true, it will derail many assumptions about black money in cash and challenge the entire logic behind this gruesome demonetisation drive, that claims to have wiped off black money at the cost of causing grave trouble to common people and creating multiple banking challenges as the bonus.

To understand the logic, let’s go back to RBI data that says India possessed Rs 14 lakh crore cash in high denomination by March 2016.

Out of this, around 30 per cent, or nearly 5 lakh crore, was with banks and other government agencies, which is accounted for and so was clean cash.

According to government and RBI, banks deposits have already touched Rs 6 lakh crore mark, beginning November 10 till the teller closing November 18, while withdrawals, including the exchange of old notes, came in above Rs 1.35 lakh crore during the same period.

Total deposits (Rs 6 lakh crore) account for 60 per cent of total cash (Rs 9.9 lakh crore) with the public. A substantial amount of old currency has also reached petrol pumps, utilities, hospitals and medical stores, which have been further allowed to accept old notes until December 15. 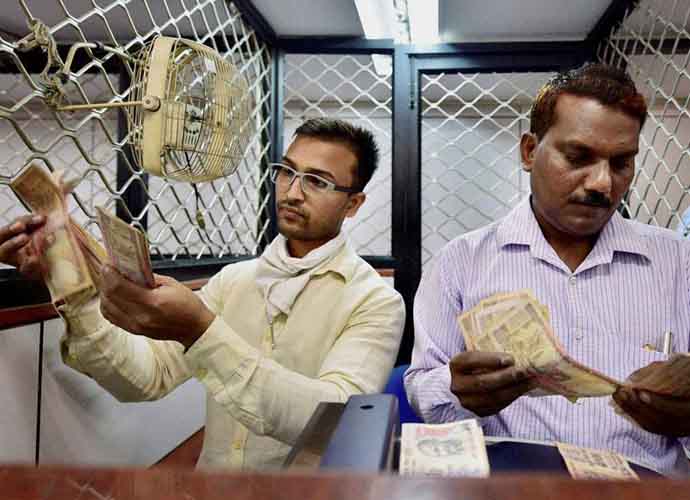 Those who are caught later will have to pay 60 per cent tax plus 30 percent penalty. (Photo credit: PTI)

The revised RBI data is yet to be made public. However, MoS finance, Santosh Gangwar, has been reportedly said, "A total of Rs 8 lakh crore in scrapped currency notes has been deposited in the banks". Mint Street experts also estimate almost 75 per cent of the total cash with public might have entered or transited through the official channels of banking and exchange system.

Now the old notes exchange facility at the banks stands scrapped, experts believe, deposits will keep swelling and collection may touch 9.9 lakh crore till December 30, ie close to the level of cash with public recorded before demonetisation.

As the success of the scheme will be measured by the fact that how much cash will come back for exchange and how much of it will disappear from the system, let’s assess the possible scenario on the deposit glut.

If the total deposit and exchange figures match with the high denomination cash in circulation data, then:

1. There wasn’t enough black money in cash in the first place, but a common man’s small cash savings and consumption expenses which entered the banking system. If original idea was to get this money in the banking system, this could have been done by banning the notes in phased and organised manner.

2. Black money hoarders found ways to deposit their dirty wealth with the help of people with low income. The reports of misuse of Jan Dhan and dormant accounts suggest this might be the case.

As deposits glut is leading to ruin the basic purpose of demonetisation, government is now forced to take corrective measures to discourage this trend. Government is rushing to Parliament with an amendment to the Income Tax Act to levy 50 per cent tax on unaccounted deposits and 25 per cent of deposited account would remain locked with government for four years.

Those who are caught later will have to pay 60 per cent tax plus 30 percent penalty. The amendment will be tabled in Parliament for approval by next week.

In the meanwhile, income tax department also is gearing up for a massive scrutiny drive against millions of accounts to check the whereabouts of the money.

As government is desperate to show the success of demonetisation in big numbers, the proposed income tax on bank deposits is coming up with two obvious targets.

1. The heavy tax on unaccounted deposits may discourage people to bring their black cash into the banks. This may result in the pile of extinguished cash, which may be claimed as bonanza by the government after the process is over.

2. If deposits keep bulging, the withhold money and tax on unaccounted deposits will become a facesaver.

Banks in a crazy fix

Swelling deposit is not good as this is the consumption expenditure, which has now been locked into bank accounts while the economy is struggling for fresh demand.

The banking industry and RBI too cannot celebrate this glut amid tapering demand of credit and rising NPAs. A few banks such as SBI, PNB, ICICI Bank and HDFC Bank have already slashed their deposit rates as they cannot afford to offer interests on huge deposits.

The real return of short-term deposit has now turned negative against consumer inflation: that is the depositors will not get any return of these deposits.

As currency shortage is acute and cash withdrawal limits are likely to stay longer than expected, banks will have to bear huge service cost on the deposits for the short to medium term, which they are passing on to RBI via reverse repurchase rate.

Reverse repo is the rate at which commercial banks lend excess deposits to RBI.

Since RBI cannot afford to pay interest to the banks beyond a point, therefore, on Saturday it has allowed banks to appropriate all incremental deposits as additional cash reserve ratio as a temporary measure.

However, this will mean that additional deposits with the banks may not be available for lending. This is contrary to the expectations of benign interest rates, post demonetisation.

Demonetisation may yield positive returns in the long run but as far as accretion of huge bank deposits is concerned, this is not an outcome to rejoice politically and certainly not economically.

Post your comment
#Income Tax, #Banking, #RBI, #Demonetisation
The views and opinions expressed in this article are those of the authors and do not necessarily reflect the official policy or position of DailyO.in or the India Today Group. The writers are solely responsible for any claims arising out of the contents of this article.