The new notes have extra security features, besides having a peculiar colour, theme and size which differentiate the new bills from the earlier series.

The new ₹500 and ₹2,000 rupee notes that RBI is issuing are "high security" notes and have several new features to make them harder to fake than the earlier 500 and 1000 rupee notes that were demonetised. The ₹2,000 denomination has Motif of Mangalyaan on the reverse, depicting the country’s first venture into the interplanetary space. The ₹500 note has an image of Red fort along with the Indian flag.

The salient features of the banknotes will be as under:

1. See through register with denominational numeral 2000.

4. Portrait of Mahatma Gandhi at the centre.

6. Windowed security thread with inscriptions 'भारत', RBI and 2000 on banknotes with colour shift. Colour of the thread changes from green to blue when the note is tilted.

10. Number panel with numerals growing from small to big on the top left side and bottom right side.

11. Horizontal rectangle with ?2000 in raised print on the right.

12. Seven angular bleed lines on left and right side in raised print.

13. Year of printing of the note on the left.

15. Language panel towards the centre.

Dimension of the banknote will be 66mm×166mm 1. See through register in denomination numeral

2. Latent image of the denomination numeral

5. Windowed security thread changes from green to blue when note is tilted

8. Number panel with numerals growing from small to big on top left and bottom right sides

9. Denomination in numerals with Rupee symbol in colour changing ink (green to blue) on bottom right

12. 5 bleed lines on left and right in raised print

13. Year of printing of the note on the left.

15. Language panel towards the centre.

17. Denominational numeral in Devnagari on right.

The size is 63mm x 150mm, colour is stone grey with Red Fort and Mahatma Gandhi's image on each sides 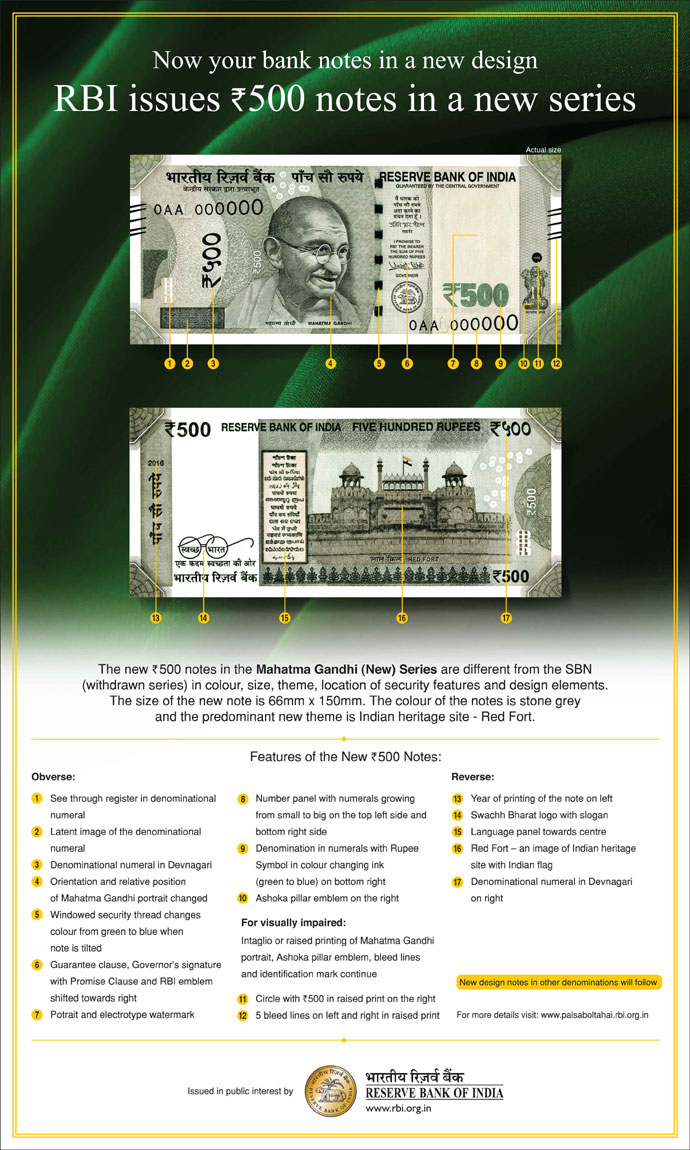