Make in India vs Made in China: Who outweighs the other?

India has to assess whether it is time to look the dragon in the eye, or face the mirror.

Prime Minister Narendra Modi has issued a clarion call to Make in India. Sonam Wangchuk had added a clamour of ‘boycott everything Chinese’ to muffle the demand of Made in China. To begin with, popular satirist Saloni Gaur has decided to deprive TikTok of her uber cool and super funny satires.

An app, Remove China Apps, developed by Indian firm OneTouch AppLabs, that tried to take the clamour to a crescendo, has however, been removed from Google Play Store. But that hasn’t really silenced the boycott ‘Made in China’ call.

The call to make in India comes amid many provocations, both human and viral in nature. The coronavirus outbreak showed global supply chains can be disrupted, that over-reliance on these chains could lead to inviting supply of viruses, as happened with Italy, and that not manufacturing at home meant not generating enough decently paying jobs for India’s people. China is years ahead of India in terms of manufacturing. (Photo: Reuters)

India is getting vocal about local at a time when China is relocating manufacturing sites to other developing countries, and businesses are replacing manpower with machines. Is replacing Made in China with Make in India thus pure daydreaming, or an achievable feat?

The tortoise and the hare

The gap between where India is starting from and where China is, calculates to roughly about three decades. India is older to China by about two years. India gained independence in 1947; China became a communist republic in 1949. Both countries began the nation-building process about the same time in 1950. Till 1990, India remained ahead in terms of GDP. To understand the rest, a simple revisiting of the Tortoise and the Hare story would suffice. The tortoise is now a dragon, 4.6 times the size of India in GDP numbers.

China had pressed the accelerator on economic progress shortly after the death of Mao Zeadong in 1976. The country began opening its economy in 1978, inviting foreign investment. Much of this investment was invited in the coastal areas of China, giving a thrust to import-export opportunities. Who knew then, China would soon become one of the biggest exporters in the world.

China’s political structure allowed it to do away with red tape, even if corruption thrived in the Communist Party and its cronies. This was an opportunity businesses were ready to lap up.

China, meanwhile, was also preparing the ground for businesses to come and stay. It began investing heavily in infrastructure. While this helped attract businesses, it also helped employ China’s vast and until then poverty-stricken population. When people earn, they also spend. Infrastructure projects were thus helping China build a stable domestic market.

In its infrastructure push, China laid out a network of roads, highways, railways, waterways and airports. Sometimes getting a shipment in India from China is quicker than getting one from one part of India to the other.

To provide businesses the ease of access, China rolled out many SEZ projects. Given that China is not a democracy, environmentalist concerns were rarely, if ever, raised. Shenzen, on such SEZ, is considered a role model of such projects. It is quicker at time to get a shipment from Shenzhen than Kolkata. When the process becomes faster, it becomes cheaper too. 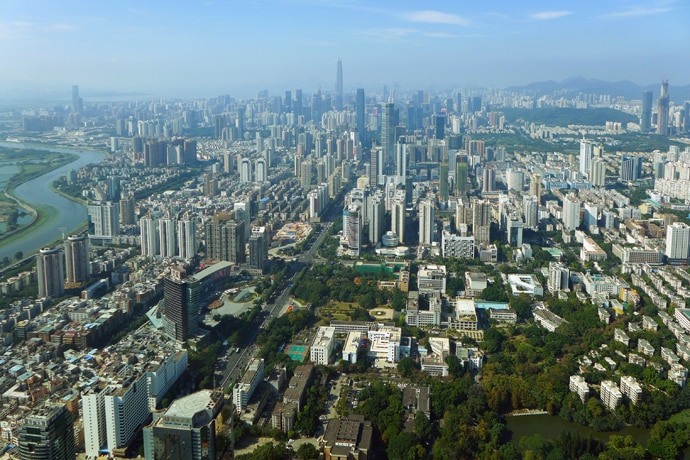 Shenzen has emerged as a successful model of SEZs. (Photo: Reuters)

Chinese products in India are sold at such large scales because of their low cost too. This has outdone Indian manufacturers in most sectors where a competition from China is present. And it isn’t just the infrastructure.

The communist nation has worked on people’s skill sets too.

In contrast, India hasn’t been able to tap into its human capital in a big way. India suffers a deficiency in the ‘know-how’ of specialised skills at work. So, while India says its population is its biggest advantage, a fact it can forget at its own disadvantage is that China’s manufacturing productivity rate is 1.6 times higher than India’s. That may not look like a big gap; so look at what this translates into. On average, this results in each Chinese worker producing 60 per cent more than their Indian counterparts.

When it comes to labour force, China has traditionally encouraged gender justice. While in India, only 34 per cent women are part of the labour force, in China, a staggering 74 per cent are.

Several studies have shown productivity is higher in countries and organisations that have gender parity in terms of participation, because this leads to more skills and healthy competition.

So is it all lose-lose for India?

No. Several factors say India can look back in the dragon’s eye. But looking in the dragon’s eye isn’t advisable because that would escalate tensions. The smart thing to do is to keep a count of the positives India has and build on them. One positive is the median age comparison of the two countries. In China, the median age is 38.4 years. India, with a median age of 26.8 years, is ahead of China by close to 12 years on that front. The neighbouring country has eased its one-child policy too now, but for now, it is advantage India.

A British-based education system has allowed India a better grasp on English. Most businesses need translators in China or those invested long enough can pick up Mandarin. Not many Chinese speak English, though they are learning. India is ahead on that front too.

In all communication work too, India enjoys an edge, but it needs to play its cards right.

One reason China enjoys the support of its people, who it has kept in the dark on most things, is that turning China into a manufacturing hub helped increase wages for people. But businesses that are now facing increased costs because of higher wages, are looking for other opportunities.

On its part, China is proving an alternative in African countries. Over the last decade, China has increased its spending on building roads, port and highways along with utilities and telecommunication.

The collaboration and cooperation makes Africa one of China’s greatest allies in the current global market environment. That is the reason why it pushed for Ethopian Health Minister, Tedros Adhanom, as WHO chief.

Africa supplies China with abundant raw materials. The continent, it is estimated, has about 90 per cent of the entire world supply of platinum and cobalt. Also, half of the global gold supply, two-thirds of the world’s manganese, and 35 per cent of its uranium. Africa is rich in resources and China has made deep inroads in the country. (Photo: Reuters)

Africa alone accounts for nearly 75 per cent of the world's coltan. That cellphone, or laptop, or tablet on which you are reading this, is likely to have coltan, an important ore used in electronic devices.

While China has the indirect access to minerals, it is fast losing the world’s trust. Countries are beginning to see China as an unreliable partner in the aftermath of the coronavirus outbreak.

Japan has set aside ¥243.5 billion to help firms shift production units out of China. In 2018-19, India alone imported US $87,071 million worth of products from China.

Most countries looking for a way out of China may not be looking straight into Africa. Civil strifes are routine in Africa and disease outbreaks rampant. A global pandemic is unlikely to take businesses to places that run the risk of regular epidemics.

Is it advantage India?

India is also reportedly readying a pool of land double the size of Luxembourg for manufacturing firms looking out of China. Reports suggest that efforts are on to court about 1,000 American multinationals. But the pandemic has hit global businesses hard. They will take a couple of years to get over its impact. Moving their businesses suddenly from one country to the other won’t be happening so soon.

But India has a huge demand potential of its own to tap. Two-thirds of India’s economy is dependent on its domestic market.

The standoff in Ladakh has heightened the anti-China sentiment in the country, so more people are likely to think twice before picking up Chinese products. At least the ones that are visible to the naked eye. The penetration is deep, the costs attractive, so no change is coming immediately. But a beginning is likely to be made.

India can avoid looking the dragon in the eye, but look in the mirror to assess what it can produce.

Post your comment
#Sonam Wangchuk, #Made In China, #Vocal for local, #Makeinindia
The views and opinions expressed in this article are those of the authors and do not necessarily reflect the official policy or position of DailyO.in or the India Today Group. The writers are solely responsible for any claims arising out of the contents of this article.